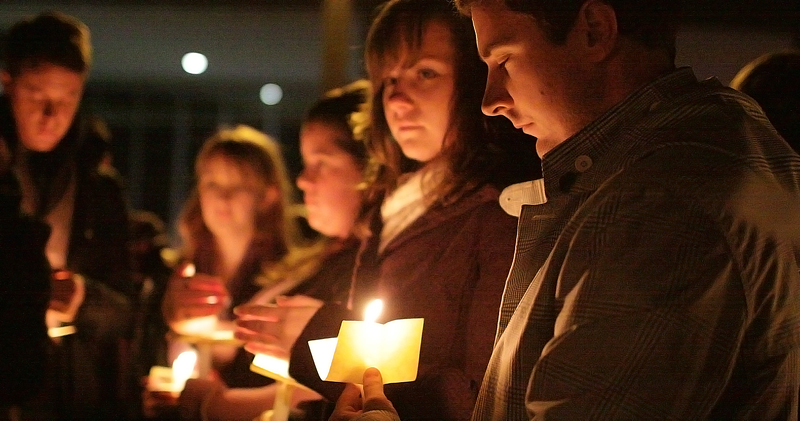 Last week the UTMSU Ministry of Social Justice hosted the four-day event “Expression Against Oppression” to educate the UTM community and spark debate about domestic and international issues of injustice. Over the course of the week, various topics were discussed in different forums in an effort to promote awareness. Roundtable discussions, documentary screenings, and artistic gatherings brought students together. On event in particular shed light on recent suicides across North America caused by homophobic bullying.

On Wednesday, October 20, a candlelight vigil was held outside the Blind Duck to commemorate the youth who have recently taken their own lives due to homophobic abuse and bullying. The event was part of the week-long Expression Against Oppression event hosted by UTMSU.

Bobby Diaz, UTMSU LGBTQ coordinator, presented a speech in remembrance of the lives lost and implored those who may feel alone to “hang in there and ask for help”. He shared his personal experiences and attested the importance of inner strength and a supportive environment.

“These recent deaths are a reminder that everyone must worker harder to overcome bigotry and hatred in every aspect of life,” said Diaz. “This is more than stopping bullying in schools. This is about freedom of love, the right to express yourself, the right to love who you want, the right to go to school without being terrified, and the right to live.”

In a speech, third-year student Fred Besik kept with the theme of Expression Against Oppression week. He emphasized that it is important to find ways to combat not only homophobia, but all phobias. At the end of the vigil, students hugged, sang songs, and shared tears.

“My heart went out to their friends, their families, and more importantly to these youth. They had such a long and bright future ahead of them—a future that was sure to be filled with laughter, joy, and love… a future they’ll never be able to experience,” said Harla Receno, a UTMSU board member. “My sister pulled me aside afterward and as she was hugging me she whispered, ‘I’m glad you stayed strong. I’m so glad you’re here. I love you.’ I wish those youths had heard the same words.”

Because purple represents “spirit” on the LGBTQ flag, on Wednesday, thousands everywhere wore purple to commemorate the recent suicides in the last few months. According to the Facebook page called “Day of Purple”, the memoriam goes out to six boys whose names are posted on the page as well as to “all the other unknown lives lost to intolerance and ignorance, and to all of the other boys and girls who are silently suffering because of such cruel acts”.

“Gay bullying often occurs due to lack of education and lack of confrontation. Many people use derogatory terms in everyday language unknowingly,” says Kumari Giles, UTMSU VP Equity. “It is up to members of the community and allies to confront discrimination of any kind when it happens. Confronting prejudice and bigotry is challenging, but is absolutely necessary in making change.”

The World Health Organization reports that someone around the world commits suicide every 40 seconds. In Ontario alone, suicides rose from 930 in 1997 to 1,032 in 2001. Studies have revealed that LGBTQ youth are up to seven times more likely than heterosexual youth to have reported attempting suicide (un-reported attempts notwithstanding). The signs of suicidal behaviour are often missed, avoided, or ignored, which leads to even further feelings of exclusion.

Homophobic bullying includes abusive name-calling (such as “fag”, “dyke”, and “sissy”); spreading rumours and gossip about a person’s sexual orientation or identity; sexual teasing, taunting, or threats; physical aggression and violence; and using the Internet to humiliate, intimidate, threaten, or exclude because of a person’s sexual identity.

“Many youth who are not bullied in school also suffer from internalized homophobia. Internalized homophobia is caused by messages received from aspects of society (such as school, family, friends, media, religion, and politics) that say being queer or trans is wrong,” says Aqeela Nanj, the political and educational coordinator and drop-in centre coordinator of LGBT Outreach at U of T. “Sometimes these messages are blatant and outright; other times they are implied, such as sayings like ‘That’s so gay!’ or through jokes about queer and trans[exual] people. Just as bullying can lead to self-hate and suicide, so can internalized homophobia. Both need to be addressed, both need to be changed.”

“I know many queer and trans youth who have been bullied in high school, some to the point where they have switched schools or have dropped out. Unfortunately, bullying does not stop at the end of high school and some face bullying in university as well,” says Nanj.

“It Gets Better NOW”, a discussion and brainstorming session held on Thursday, October 21 at the St. George campus, is about what students can do to improve the lives of oppressed queer and transsexual youth. Nanj is the main coordinator of the event.

“The campaign itself is not enough to make the lives of marginalized youth better. Many youth find that their lives do get better as problems are resolved; however, there are many youth who continue to suffer the same issues throughout their adulthood,” says Nanj. “We need to address the root of the issue. We need to address the negative messages society gives about being queer and trans.”

“My message to people who are currently being bullied is echoed by many in the ‘It Gets Better’ campaign. Often we find ourselves in isolated communities and believe there is no way out,” says Giles. “However, there are many resources available as well as good people who are open to supporting you, myself included. Don’t give up. Stay strong and be confident in who you are. It will get better.”

The U of T’s “Positive Space” campaign works to sustain a welcoming environment for the U of T community. The campaign is “a groundbreaking program that identifies safer and more inclusive spaces for lesbian, gay, bisexual, transgender, transsexual, intersexed, queer, questioning, and two-spirited (LGBTTIQQ2S) students, staff, faculty, alumni, and allies at the University of Toronto.” Positive space challenges the constructs that continue to marginalize LGBTTIQQ2S students, staff and faculty.

LGBTOUT, located at the St. George campus, offers space to “explore our diverse identities both socially and politically” and has been “fighting for queer rights and visibility for over 40 years”. The main goal of LGBTOUT is “the improvement of the learning, living, and working environments for LGBTQ people on all three U of T campuses, to the point where we are free from harassment, discrimination, and hatred.” Their website can be found at http://www.lgbtout.com .

Out@UTM, UTM’s first LGBTQ group on campus, was founded in October 2002 and currently serves as a support network, a social circle, and a fun outlet, providing tri-campus parties, drag pubs, member meetings, and anything that allows students to “explore and express themselves freely”. Out@UTM is devoted to helping its members and its community, and everyone is welcome to attend meetings and events.

The Sexual Education and Peer Counselling Centre is a student-run organization that provides the U of T community with resources and education about healthy sexuality. The centre welcomes students without judgment from a diverse range of sexualities and actively believes in anti-discrimination for all their services, including workshops, talks, and events led by trained and informed volunteers and guest speakers all year round.

U of T also has a Sexual and Gender Diversity Office, which provides related resources, counselling, and education for the community.