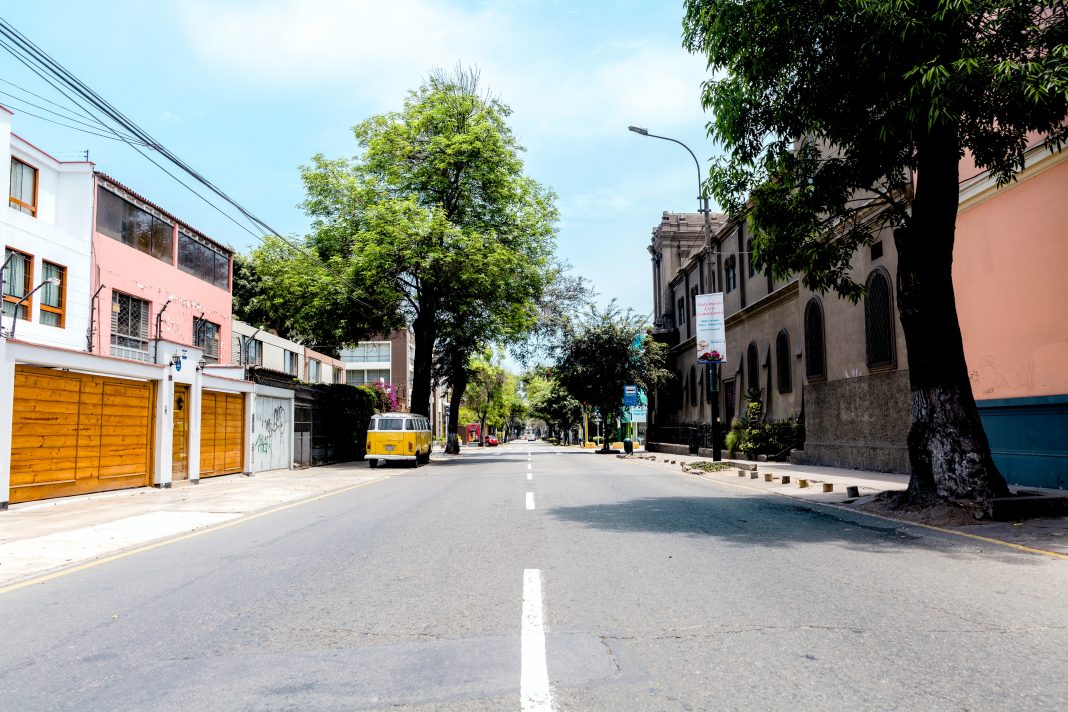 “Don’t worry if you can’t recognize them,” my dad says to my sisters and me as we push our luggage carts around the masses of people gathered by baggage claim. “We left when you were all young, so you might not remember.” Dad starts listing the names of aunts and uncles we’ll meet on this trip again, as if the repetition will somehow spark a memory after all these years.

I hear a cry to my right. A little boy pulls at his mother’s hands as he slides down to the linoleum floor. His blotchy red face matches that of his mother’s. I push my cart harder toward the double doors and the neon green “Salida” sign.

Ever since I stepped off the plane, I had followed my older sister, Stephanie, in a daze, almost half asleep from the eight-hour flight. But now, as we walk side by side and I see the exit drawing near, I can’t help but want to stare numbly at her back again. Perhaps her broad shoulders would block the stifling humidity in the air. It’s getting more difficult to breathe. It feels like my asthma attacks but wetter, like I’m swallowing large gulps of water. I know I won’t recognize them, my dad’s family.

The photos from our early photo albums are the only evidence I have of their existence. I had flipped through them weeks ago, wanting to recognize the people with their arms around my small shoulders, wanting to place those unfamiliar smiles through the photos’ sheer gleam. But no memories ever surfaced. Flipping through the albums, I could sometimes faintly recall the sharp tang of lemon or the muffled crow of a rooster, but I could never see them. It never quite fit in my mind or in the photos taken.

Whenever I would bring this up, my dad would just say we were all close. “Having six families living under the same roof will do that,” he would say, always with a chuckle and always with that glazed look in his eye. We were all happy, the photographs tell me. I was loved, my frozen smile says.

My little sister, Nicole, elbows my side before running ahead of me to where a crowd is gathering by the double doors. They must be in a rush to go home. Nicole turns back and says something to me, but I can’t hear her over the roar of cheers. The shouts sound rushed and heavy in my ear—the Spanish voices almost foreign to me in their excitement.

“Slow down,” my dad says with a laugh as Nicole jumps, trying to look over the crowd to the other side.

Does she remember them, I wonder. Would she be able to recognize them in a packed airport? Would she care? Stephanie clears her throat beside me. My dad has already gone ahead. Stephanie hurries to catch up. I follow.

It’s louder out here. The colourful clothing, the animated expressions, the warm welcomes to loved ones. It’s too loud. The crying boy wasn’t even this loud.

A young woman with thick, long hair suddenly pops up from behind a hugging couple. She waves her arms wildly, screaming, “Ricardo, aqui!  Aqui!” Further up ahead, my dad waves back. “Your tia, Sarita,” I hear him say to Nicole.

In between the bodies rushing past, I see my aunt Sarita turn to an older woman in a pale blue dress. I remember that dress from the photos. It had once been a nice azure blue. Sarita points to my dad and the old woman’s eyes follow. The wrinkles around her eyes deepen as she squints at the crowd. When her eyes finally catch my dad’s, they linger on him until they redden and swell. Tears roll down her spotted cheeks before Sarita wipes them away. A wet gasp suddenly reaches my ear and I turn just in time to see my dad wipe away his own telling tears. Nicole tugs his shirt. Her wide eyes seem to ask questions she isn’t able to say. My dad smooths down her hair as he shakes his head. His cheeks are still wet. Feeling the humidity closing in again, I look away. The arrival board sign flashes “Toronto, Canada a Lima, Peru” one last time before it flickers out. “Vancouver, Canada a Lima, Peru” replaces its spot.

I don’t remember how I got in the back seat of the rented van between Nicole and my aunt Rafita and her husband Oberto, but when I come to, my aunt Rafita is just staring at me with a grin. The walk over to the van was a blur: I was hugged, kissed, and cried on. Buried under cousins, aunts, and uncles, I learned new names and matched the once-muttered names to once-frozen faces. I heard my family tell me “how much I’ve grown” in awed tones. I just nodded, thinking, well, what else would time do?

Rafita stares at me, her smile almost as frozen as it was in the photos, and I stare right back. Nicole nudges my side. I nod. I know her Spanish is poor. I know I should talk. I know I’m the older sister. But the rest of the van is loud and brimming with a strange warm energy. Dad’s clear voice demands attention, the hesitant drawl of his English now gone. He’s in his element. Stephanie’s voice, pitched high with her accent, is animated. She remembers them. Nicole’s elbow jabs my side.

“Where are we going?” I ask loudly in English, abruptly cutting off the excited chatter. Dad says we’re going to Rafita’s house, his lisp returning with his English. Not knowing what else to say, I nod. The cheerful conversation springs back up.

“Your English sounds so good, dear,” Rafita says in Spanish. Turning to her, I notice her cheeks are still damp. Her eyes glisten under the car’s overhead lights. I nod.

Oberto rumbles out a laugh, “You guys like Canada? How is it? Is it cold? Do you remember your aunt and me? How are you?”

I nod. Nicole mumbles out a reply.

“You guys grew up so fast! I remember when you guys used to run all over the house, squealing about this or that,” says my aunt Sarita from the front of the van.

“We remember a bit,” Stephanie answers for us. “I remember one time Uncle Pedro showed up with a big plastic ice cream cone. He said he had a gift for us,” her accent tilts up the end of her laugh, “but when he opened the ice cream cone, a puppy came out!” The fading image of a chocolate-brown puppy tumbling out of a large blue ice cream cone passes through my mind.

The conversation turns nostalgic and without knowing it, I get sucked into the hazy memories of my childhood. Behind closed eyelids, I see photo frames against melon-orange walls. I smell sun-burnt grass and sweet lucuma ice cream. I hear light humming from the kitchen and a fast-talking news reporter from the family room. I remember sneaking into the nice dining room at my grandparents’ house when the adults weren’t around. I remember opening the glass cabinet like I saw Grandma Mamama do and flipping through her collection until I found Olga Tañón’s record. I remember setting the record as carefully as I could on the record player and feeling a thrilling wave rush through me as I pushed the needle down. Tañón’s hit song, “Es Mentiroso,” played through the grand room. Standing high on my toes, I looked over the dinnerware cabinet to see my reflection in the decorated mirror. I watched my plum cheeks turn pink as I shouted the lyrics without a care for rhythm or tune. My legs trembled to hold my new height, but I never let up. I didn’t feel any pain or embarrassment. At that moment, I was Olga Tañón. I felt her remorse, her joy, her conviction. I thrived in the passion of her words. I hadn’t experienced her heartache, but through her words, I understood it.

In the lull of my recollections, the weariness of the long flight catches up to me, and I feel my head drop against small, warm shoulders.

As I groggily blink my eyes, traffic lights flash by the car window. A big church with grey pillars passes by. My aunts and uncle make the sign of the cross. Stephanie follows suit a second later. Tall apartment buildings turn to one-level houses, and the bright streetlights fade to a dark yellow as the van drives further away from the airport. The steady drum of the wheels and my makeshift pillow eventually sooth me to sleep.

“Wake up, dear,” a soft voice whispers. The once sharp Spanish feels smooth and graceful in my ear. I open my eyes to see a group of people standing outside a small orange house. Among them, I see my dad laugh tenderly as two of my older aunts begin to cry on his shoulders. On the side, Stephanie stares at our six young cousins as they race over from the house next door. By the van, Nicole looks flustered as our aunts kiss her cheeks in greeting. I blink my eyes twice; the scene feels strangely familiar. Only the suitcases by the door stick out oddly. “Wake up, dear,” Rafita says beside me as she gently tugs on my arm. “You’re home.”