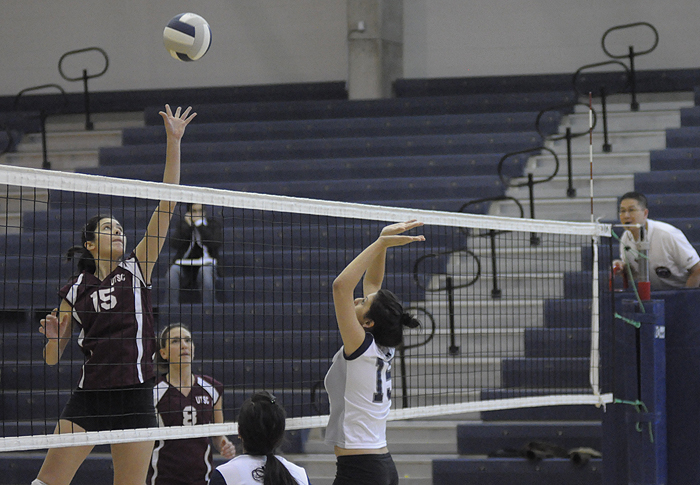 The U of T tri-campus girls volleyball Intramurals continued today, with UTM hosting UTSC at the RAWC.

UTSC won two straight sets with a scoreline of 25-22 and 25-19. After a cautious second game that saw the two teams exchange points with each other, UTM was able to adjust their game plan.

Coach Cody, who plays for Sheridan Varsity, rallied his team together and focused on team play and positioning for the third set.
He was very positive and encouraged us to keep to our game plan, said UTM volleyball player Jennifer Osh.

Its been difficult, said Osh. Teams we play against have coaches that arent students, so they can devote a lot of time to the team. Our entire team and coach are full time students, so planning practices has been a problem. We havent had a practice since the December break.
But the team refuses to get discouraged and looks forward to the playoffs.

We are neck and neck with teams during the games, so even if we end up in the loss column, we know we can put up a fight and with a little more practice, hopefully lock down a few wins, said Osh.

The lack of fan support also seems to be an issue with the team, with only a handful of guests making it out to their last match.
With a little more fan support, it could provide us with home advantage, added Osh.
UTM hopes to avoid a ninth straight loss when they host St. George White on January 24.