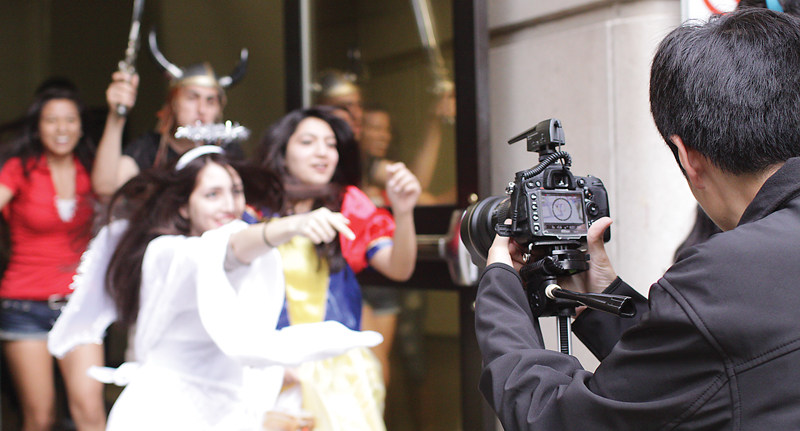 The first part of the tri-campus University of Toronto Lip Dub was filmed at UTM on Sunday. A lip dub (like a lip sync) is a music video of one continuous shot in which students sing along to a tune that is re-dubbed into the footage during editing. The organizing group, comprised of students, established the U of T Lip Dub to animate school pride and spirit.

The U of T Lip Dub Team, led by Aaron Liu and Sandra Zhou, held auditions in August in search of enthusiastic singers and dancers. The tri-campus lip dub aspires to be the largest and most creative university video recorded thus far.

“[We] hope to achieve something that will create buzz, not only on campus but also around the world,” said Charles Wong, a member of the public relations team for the U of T Lip Dub. “We also hope that this video will help bring students across this large and diverse campus together to celebrate unity as U of T students.”

Over the summer, the team completed the storyboard for the lip dub. This year, the emphasis has been shifted to promote the event and outreach to include a larger group of students on all three campuses. Individual entrants and  clubs are encouraged to participate in order to achieve as much spontaneity and originality as possible.

The Lip Dub is student-directed and includes a few choreographed segments.

The funding for the U of T Lip Dub came in a variety of forms. It began with a clubbing event that raised $2,600 and grew to attract larger corporate sponsors. Through greater promotion, grants from different faculties and colleges have contributed to a budget of approximately $20,000. All the proceeds will be donated to the Sick Kids Hospital.

“Look forward to crowds, explosions, an epic ending, and a few celebrities—including our own President Naylor!” said Wong.

To stand apart from previous university lip dubs, U of T is taking advantage of its large student population. Over 4,000 students are expected to attend over the course of the three-day event. This surpasses the number of participants in any rival lip dubs thus far.

“I signed up for the U of T Lip Dub because UBC’s looked really cool,” said volunteer Janet Jamieson. “It’s a great way to gather a large number of students who may not normally cross paths and unite everyone towards a common goal.”

For students that missed the filming at UTM, there are still two opportunities to get involved. Filming at U of T Scarborough will be held on September 17 and at St. George on September 18.

To volunteer or register, go to the official website, utlipdub.com, for more information.