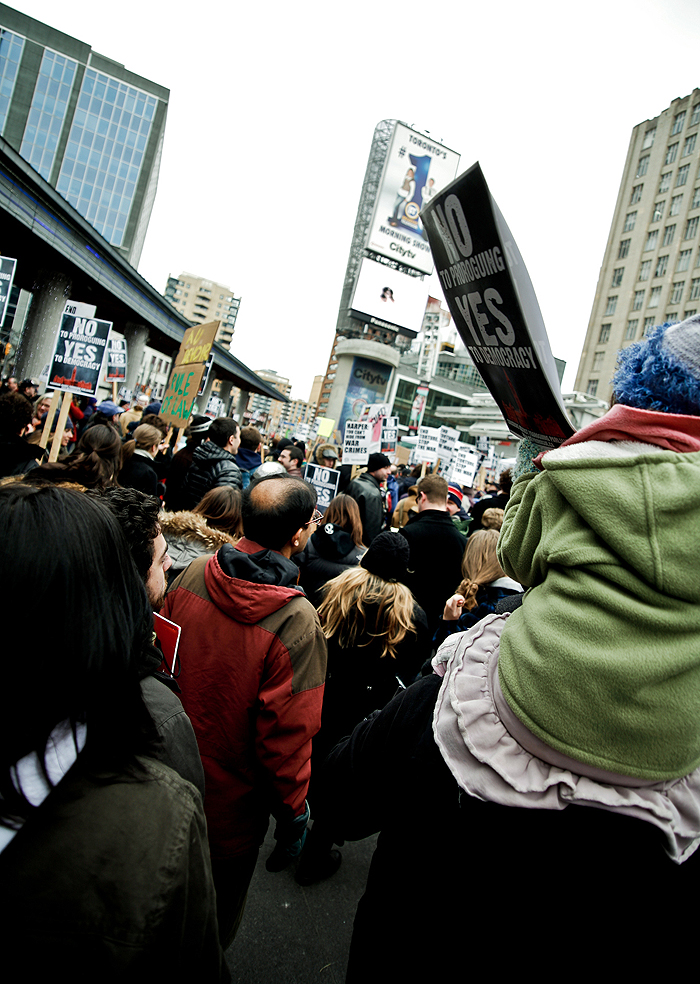 Last Saturday, more than 10,000 citizens crowded Yonge and Dundas Square in downtown Toronto to rally against Stephen Harpers decision to prorogue parliament. Dubbed as the National Day of Action, the protest saw rallies in over 50 cities in Canada.

Groups of excited citizens were dispersed around the area, huddled together to keep warm and practice chants for the march. Within 15 minutes, the numbers in attendance sky rocketed and Yonge Street had to be shut down.

Attendees held picket signs that displayed the rally poster. Others got creative and waved homemade signs the read Get back to work! and WANTED: Stephen Harper for crimes against democracy. The NDP passed around orange posters that read, Stand up to Harper. One student pulled a permanent marker from his jacket pocket and added, Dont bend over.

The MC for the day, comedian Martha Chavez, kept the crowd laughing as she expressed her dislike for Harper and compared him to various dictators.

The rally also included musical and comedic acts. A pair of women that call themselves Wolf Women sang aboriginal inspired songs. They described the chosen pieces, entitled Strong Woman and Brave Heart, as expressions of the fight against tyranny and oppression.

A crowd pleaser was the Raging Grannies, a group of elderly women dressed in brightly coloured ponchos and bedazzled hats with pompoms. They sang revised versions of well known songs, changing the national anthem to describe Harper as a king and asking, Is this the Canada you want to know?

UTM student Walied Khogali taught the crowd the march chants, shouting Listen to the nation, stop the prorogation, and Whos parliament? Our Parliament! The crowd also tried out a cheer from the revolutionary movement of students in Paris in the 60s, shouting out Ce nest que le debut! Continuons le combat!

Its really easy to sit at home and say that someone needs to fix this. Its another thing to come out and march, said attendee Leslie Holt, I think its really important that we understand that this is just the beginning and we need to continue on.

On the effect that the recent prorogation has had on the polls, The Globe and Mail reported that Paul Adams of Ekos says the depth of anger about prorogation caught political analysts and just about everybody else, including the Liberals, by surprise.

On Monday, Liberal and NDP Members of Parliament will return to work despite Parliaments suspension.

Michael Ignatieff of the Liberal Party of Canada, Jack Layton of the NDP and Elizabeth May of the Green party spoke at the rally in Ottawa. International rallies took place in New York City, San Francisco and London, England.