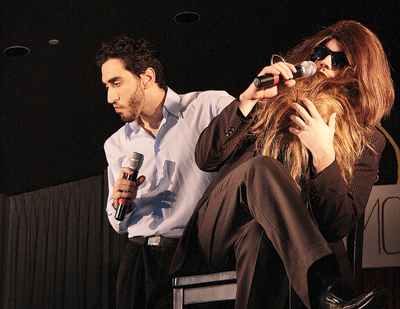 Honestly, I think it ran better than last years third night — quite a statement, especially considering Michael Ross, co-producer of Style and Profyles sixth annual Fashion and Dance Show, was referring to this years preview which began an hour late last Thursday night. I found out later on the next evening that such a claim did not go unsubstantiated.

Hosted by Norris Yacoub and Camilo Diez, the Fashion Show, which ran from Thursday to Saturday last week at the Blind Duck Pub, proved as successful as any of the productions over the past years. The show on Friday evening in particular played to a packed audience, many of whom left impressed by the dancers, models, and clothes on display. Hosts Norris Yacoub and Camilo Diez entertains the audience in between segments with their renditions of Joaquin Phoenix at a live talk show. Photos/Lara Matissen

The fashion show this year incorporated a fascinating and well-arranged Night at the Movies theme, with each segment reflecting the looks and sounds of various movies from A Night at the Roxbury to Stomp the Yard to Grease. This also allowed for hosts Yacoub and Diez to re-enact some often humorous skits from the respective movies just before each segment, keeping the audience constantly entertained between each and every performance.

As with every year, the show featured a startling array of model-dancers — all students from UTM. But looks and stylish cat walking werent the only talents on display, a handful of the participants such as Alyssa Seli, Meghna Venkatesh, and Diana Pandya also competently choreographed some of the dance segments.

One of the choreographies which stood out was Pandyas ambitious routine from and for the film, Garden State. Decked in clothing from Individual, Pandyas ballet-like dance movements to the tune of Frou Frous Let Go required no props and spilled graciousness from beginning to end. One of the slower numbers of the evening, the routine earned one of the loudest applause for its skilled routine.
Pandya, a second-year English major, claimed she grounded her contemporary three-formation piece very much on ballet. I wanted to go for something modern with a lot a lyrical movement. There was a lot of ballet technique involved, explained Pandya.

Bearing a much higher tempo and also deserving of mention was Venkateshs Sex and the City number. The energy-driven dance, co-headed by Venkatesh and Seli — two of the standout dancers throughout the show — would give even the Pussycat Dolls a run for their money. Even a flung-off shoe at the end of the routine didnt taint the performance. Other notable segments included Sheena Campbells Stomp the Yard which featured no music and a remarkable in sync stomp performance throughout, a salsa-merengue number by producers Ross and Daniella Fragomeni inspired by Dirty Dancing and of course, as with every year, the belly dance segment by Venkatesh for the film Alexander.

Through her livewire choreography, Seli shows why the Bee Gees Staying Alive is so effective for runway modelling. Later on in the Hip Hop segment, Seli also demonstrates why she could and should lead any street-dancing troupe.

A second-year Professional Writing student, Seli claims to have been dancing ever since she was little. Its my biggest passion. Its why I love doing this show every year, she explained.

Venkatesh, a three-year veteran of the fashion show, added to that sentiment as well, citing that all the work and the dancing is worth it in the end. Its always stressful in the beginning, but nothings better than having all my girls around me belly dancing. And the cat calls [during the show] are great too.

Ending off the show was a surprise appearance from the South Asian Alliance (SAA) dance troupe. Fresh from their strong showing at the SAA Culture Show last week where they bagged the Best Spirit Award, the group seemed a little out of place in terms of fashionable clothing, but proved a nice segue as far as creative choreography and technique-driven dancing were concerned.

Without any last minute withdrawals from clothiers and nary a wardrobe malfunction this time around, Ross was certainly pleased with the show in all areas. The thing that made it all work so smoothly this year was the professionalism displayed by everyone. [Throughout] the entire journey there was no hiccup, no stress, no drama, said Ross referring perhaps to the years past when former producer Cari Salib ran the proceedings.

Ross, a grad student at U of T, also cited the different approach to the dance choreography this year as another crucial factor. Instead of complicated choreo, we designed everything simply to bring out the best in every single performer.
And when speaking of performers, Ross felt it imperative to point out third-year Psychology major Cheyenne Thannikkatu, who aside from her impressive Old Hollywood dance routine, also designed the clothing line Cheyenne Jo, worn during both the belly dance and Old Hollywood segments.

I love sketching and drawing, said Thannikkatu when asked what inspired her designs. It was really amazing to see so many of my creations come to life. I have much to thank my mum for because she created all the dresses. Without her, this wouldnt have been possible.

With such lofty standards already in place, producers Ross and Fragomeni must feel the pressure to meet the high expectations next year.
Not really, especially if the performers are like this years, maintains Ross. I mean, the cast just ran themselves; almost as if I could put my hands back and just watch. They were that dedicated. Phenomenal.

All proceeds from the three-night event went toward the student refugee program, WUSC. Impressive. Showcased