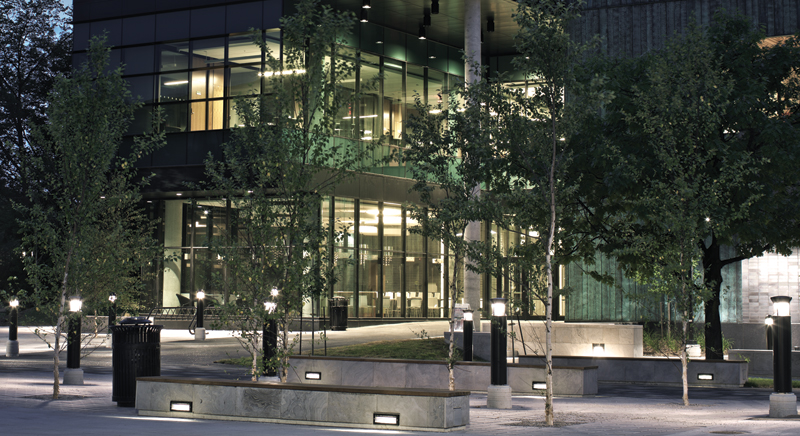 Over the course of two years, the UTM campus has transformed and expanded to a capacity that few students would have believed possible in such a short amount of time. After the elimination of 400 parking spaces and the development of a $6-million parking structure, the Instructional Centre is open for the new school year while the Terrence Donnelly Health Sciences Complex is in its final stages. The new buildings have neared completion just in time to begin the 2011 academic year with more than 12,000 undergraduate students on campus, the largest enrollment at UTM yet.

The Instructional Centre, with its sleek architectural design and expansive atrium, offers students an alternative to the overcrowded library stacks. The $70-million structure accommodates 2,500 students and boasts a 500-seat auditorium, numerous tiered classrooms, private and group study rooms, and a 24/7 computer lab. The auditorium was designed with special attention to accessibility and acoustics to provide the benefits of an intimate learning experience similar to that of a seminar room. Lecture halls are equipped with cameras for potential videoconferencing purposes while security cameras in the hallways and atrium provide safety surveillance. To address the lack of common space on campus, the building includes multiple aesthetically stimulating and optimally situated student lounges with views of the campus landscape and a café with a Second Cup and Panini Fresca.

“The Instructional Centre responds in part to some of the overcrowding and behavioral issues that have arisen in the library,” said Andrew Frontini, the design director at Shore Tilbe Irwin & Partners that also designed the Hazel McCallion Academic Learning Centre. “By programming and designing more social spaces for students and more group study spaces, the intent is to take some of the pressure off the library. We are designing these buildings as gateways to the university. The copper cladding of the Instructional Centre is meant as a response to the wood of the library—two rich, natural materials that are in keeping with the Canadian sense of the landscape.”

The IC not only adheres to UTM’s “grow green, grow smart” philosophy, but has been constructed to meet the Leadership in Energy and Environmental Design (LEED) Silver certification. The building includes solar panels, water-efficient fixtures, reusable and recyclable building materials, energy-efficient lighting with motion sensors, and a geothermal heating and cooling system. (Geothermal heating and cooling uses a ground source heat pump to transfer heat to or from the earth to efficiently regulate the internal temperature of the structure.) The pipes for the system were installed 550 feet below the soccer field adjacent to the North Building.

The federal government announced the $35-million investment in May 2009 as part of the Knowledge Infrastructure Program to improve post-secondary institutions. The provincial government matched the federal contribution out of the 2009 budget. Bob Dechert, Parliamentary Secretary to the Minister of Foreign Affairs and Member of Parliament for Mississauga-Erindale, and the Honourable Harinder Takhar, Minister of Government Services and Member of Provincial Parliament for Mississauga-Erindale, were in attendance to celebrate the opening of the IC on August 24.

To further enhance the campus’ academic facilities, the university received a $14-million investment from the provincial government towards the construction of the $37-million Terrence Donnelly Health Sciences Complex that will be the academic centre of the Mississauga Academy of Medicine (MAM). By adding a fourth medical academy to the University of Toronto, the province intends to increase the number of physicians practicing in Ontario. The remaining cost of the building was provided by donations from philanthropist Terrence Donnelly, for whom the building is named, and Mississauga businessman Carlo Fidani.

The HSC, scheduled for completion this month, has been designed to enhance scientific research and learning. Each floor is positioned slightly off-centre to provide outdoor garden patios for students and faculty, and the size and positioning of each floor is dictated by its function. The first floor includes lecture halls and seminar rooms to avoid disrupting work on the third and fourth floors, which house faculty offices and research laboratories. The second floor is dedicated to the MAM, providing the first incoming class of 54 students with a student lounge and classrooms equipped with videoconferencing to connect with lectures based on the St. George campus.

The building won an Award of Merit at Canadian Architect’s 2010 Awards of Excellence program. Kongats Architects designed the structure with stainless steel panels in efforts to achieve an LEED Gold certification. The panels deflect rain, reflect heat to cool the interior, and allow for greater sunlight exposure.

While students were originally at a disadvantage due to the decrease in parking space as a result of the two construction projects, the result offers solutions to the lack of instructional, study, and leisure space on campus.