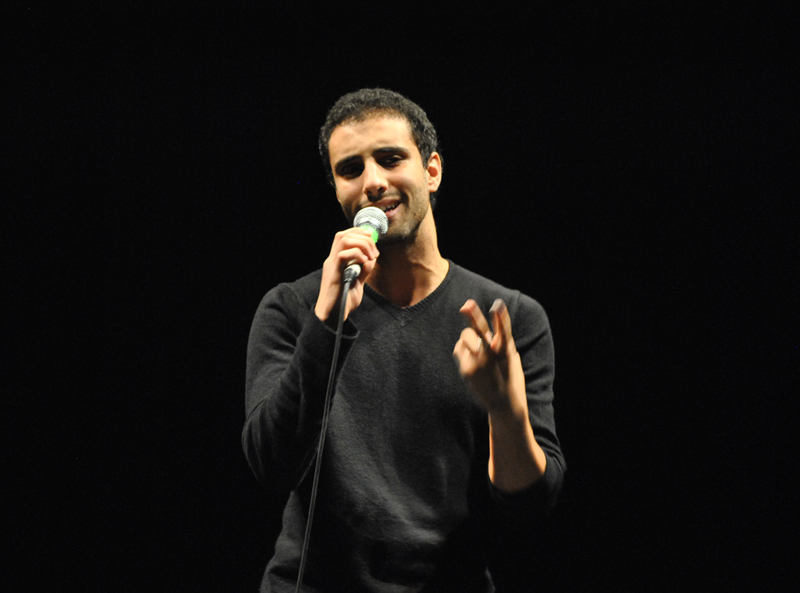 “I’m really happy that we got people to think outside of the box,” said Ruba El-Kadri, UTMSU’s VP Equity.

The event is organized jointly by the UTMSU’s Ministry of Social Justice and their Ministry of Equity, and its coordinators hope that it spreads a message of acceptance.

“The focus this year of XAO is really on current events, and what we thought [in] our ministry was that the biggest current event this year pertains to what happened in the Middle East with the Arab revolutions,” said El-Kadri. “Also Islamophobia, because we found that a lot of news is based around Islam and how people perceive Muslims.”

Highlighting a recent controversial quote made by Prime Minister Stephen Harper, El-Kadri emphasized why the Ministry of Equity felt that it was important to shed light on Islamophobia during the week-long event. Other focusses included accessibility, racism, and homophobia.

Beginning on Monday with a community café held in the Presentation Room of the Student Centre, “positive group sessions” facilitated discussions on four different topics: the legalization or decriminalization of sex work, abortion, religious tolerance in publicly funded schools, and media censorship.

“A lot of us, because of the way we were raised or grew up or the environment we’re in, we tend to think certain things about certain people and certain issues, and sometimes it’s hard for us to hear other opinions because these are touchy topics,” El-Kadri said. “So I think it’s important that we created a positive space, [a] positive environment, to bring these issues up, so that students have the chance to hear other students share their knowledge and it gives them the opportunity to take a political stance.”

After that, XAO’s theme shifted specifically to the issue of homophobia. Students watched a screening of the film Shelter, which is about the life of a man who realizes he is gay and the changes that follow in his life. The first day of events ended on a sombre yet empowering note with a candlelight vigil, hosted in collaboration with Out@UTM, opposing homophobic bullying.

On Tuesday, XAO set up a checkpoint outside the Student Centre. At the checkpoint, organizers stopped people at random and asked that they show their ID before being allowed to go inside. The experience was intended to create awareness that there are still so many border police checkpoints around the world that are restrictive, limiting, and unfair.

The overarching theme of Islamophobia continued later on Tuesday evening, which saw an Islamophobia panel where two guest speakers, Maryann Dadabhoy from CAIR-CAN and professor Shahnaz Khan from Wilfred Laurier University, discussed discrimination against the Muslim community, followed by an informative question and answer session.

On Wednesday, El-Kadri decided to spend the day in a wheelchair to experience life from a disabled person’s perspective. Working with Saana Ali-Muhammed, UTMSU’s Accessibility Coordinator, her experiment highlighted the challenges faced by students with disabilities on campus. Spending the day in a wheelchair really opened her eyes to how inaccessible our campus is and, according to her, showed that there is a lot of stigma on disability. She suggested that instead of focussing on “disability” and what a person can’t do, we should say “differently-abled” and focus on what they can.

“I found that our campus is very inaccessible and very hard to get around, specifically the Student Centre,” El-Kadri said. “We’re hoping that these results will lead to an exploratory report so that we can help the disabled[…]have access [to the UTMSU office] anytime.”

On Thursday, XAO culminated with the “Stand Up, Speak Out” music concert, featuring drummer Moez Melon, a band called the Smash Brothas, and other student performers. The performers incorporated social justice topics, such as Palestine, oppression, freedom, and Egypt, into their artistry. The Sound of Reason, a rock band, released one of their new singles at UTM to a full house at the Mist Theatre.

The festivities closed with Daga, a dub poet, using spoken word to inform the crowd about the live-in caregiver program, which specifically discriminates against Filipino immigrants, who often feel they can’t do anything about an abusive employer for fear of being deported.

“You think of Canada as this really liberal, open, welcoming country, and when you hear about things like this it’s really upsetting,” El-Kadri said. “And that’s why it’s good that you get a chance to talk about it through XAO.”