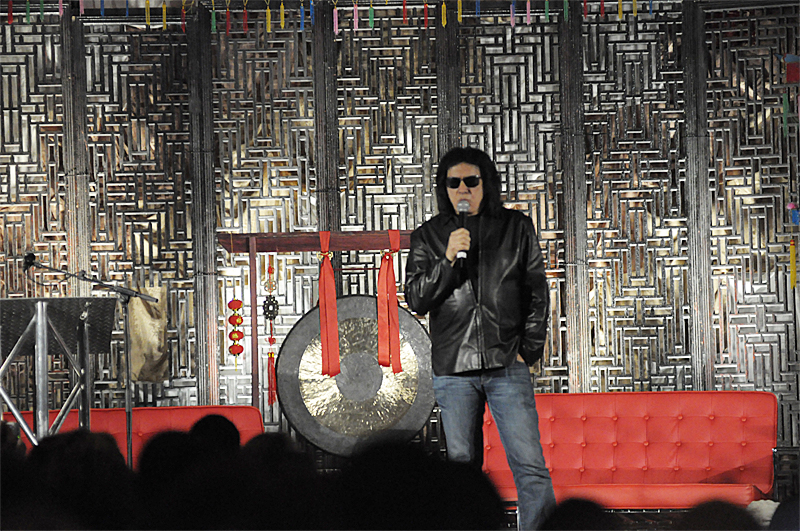 awake to a response from Gene Simmons himself. Lefsetz critisized Simmons keynote for resembling more of a infomercial and “a product promotion…for the latest iteration of Simmons Records.”

Today, Gene Simmons and Bob Lefsetz met face to face at Canadian Music to duke it out in an all out music industry brawl.

You can read yesterday’s thrashing below, or listen to audio from today’s confrontation here (40min).

Bob Lefsetz and Gene Simmons duke it out at CMW today. Lefsetz seemed the clear winner of today’s debate with Simmons responding to Lefsetz many tough accusations and questions with “Who are you?” “What have you done?” and “What are your credentials?” Simmons drew boos from the crowd with an off-colour comment about Kurt Cobain’s suicide where he said “Kurt Cobain? Between you and I, I’m not willing to blow my head off to get on the cover of rolling stone”. photos/Matthew Filipowich

Here’s an exerpt from yesterdays online brawl from Lefsetz.com

LEFSETZ: “Imagine youre stranded on a desert island and you stumble upon a
member of the opposite sex.  Youre thrilled!  Youre gonna have
someone to talk to, youre gonna make love until the Coast Guard
finally figures out your ship sank and rescues you.

And this person may not be a beauty queen, but hey, he or she is all
right.  At least thats what you think at first.  Maybe you even have
sex and forget your plight for a moment or two.  But then, even though
youre exhausted, your partner just wont give up.  Insists on having
sex every hour, being coddled, all the while telling you how fucking
hot they are.  It would almost be enough to get you to jump back into
the water and swim to your death.

LEFSETZ:”Gene showed a five minute promotional film that was such an assault, the guy in front of me put his hands over his ears.”

SIMMONS:I THINK YOU MISUNDERSTOOD.  THAT WAS YOUR GIRLFRIEND. AND YOU WERE TALKING TOO LOUD.  SHE WANTED TO SEE AND HEAR GENE SIMMONS. NOT YOU.

LEFSETZ: “Truly, it was relentless. Gene with that bizarre hairdo sponsored by Brillo”

SIMMONS: “NOW, NOW…NO NEED TO BE JEALOUS, BABY. JUST BECAUSE I
REMEMBER YOUR MOMMY BACKSTAGE AND THEN AT THE HOTEL IS NO REASON TO BE
ENVIOUS OF MY GOOD LOOKS.”

LEFSETZ:” Sure, theres salesmanship involved in becoming a successful musical act, but thats not ninety percent of the equation.”

SIMMONS: SAYS WHO, BITCH. YOU?  AND, WHATS THE NAME OF YOUR BAND. AND WHATS YOUR QUALIFICATION FOR SAYING OR DOING ANYTHING?