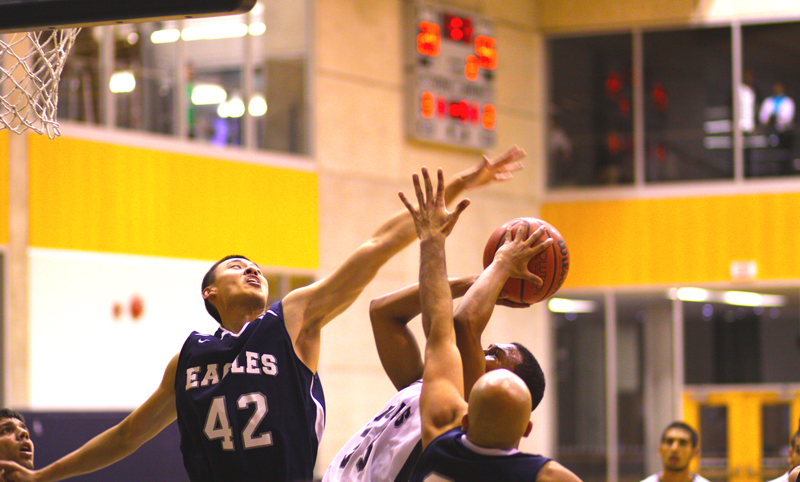 A deliverance for UTM Division 1 men’s basketball may be at hand. After starting the new millennium by winning six championships in seven years, there is an expectation for the team to do well—but the question is, which team will it be?

Regaining their past lustre will be a challenge, but to make matters more interesting, this season UTM has two Eagles teams chasing the title: Blue and White. They boast matching records of three wins and one loss, but as the A-team, Blue faces even more pressure to bring a championship back to UTM and not let White beat them to it.

This is the first season in which two UTM Div. 1 basketball teams have vied for a chance at the intramural championship. While Blue is UTM’s original Div. 1 team, White has always played in Div. 2. They moved up to the more competitive division after their championship season last year.

Goal-setting is important in Ahmed’s pre-game preparation. As a psychology major who aspires to develop a career in basketball coaching or sports psychology, he feels the presence of his team’s rivals will help Blue focus. “My motto for the season has been ‘hard work’. We have to win the league; anything less than that is failure for every single player on the team. That’s the mentality; that’s it, nothing less. We are the best team in the league, skill-wise—we just have to transfer that to a championship.”

The confidence of Ahmed and his teammates is not unwarranted. The team has had success in the last two regular seasons, but upsets in the playoffs in consecutive seasons have brought out the character of the players. “We always get every team’s best effort. We’ve got an on/off switch and sometimes we don’t turn it on in time. We’ve got a target on our back, too; we’ve got a crowd. We’re usually a top team, and there usually isn’t a crowd when we go downtown. They want to beat us, but it comes down us wanting it before those last-minute situations.”

He acknowledges that selfish ambition and complacency have been to blame for their playoff losses. This season’s new adversities have been a gift, rather than a curse, and have provided a sense of urgency. “We’re really offensively focussed.

Sometimes you just have to man up on defence. Defence is all about pride. The team chemistry is good; it’s been better before, and it’s also been worse, but we’re all friends, we get along. We understand what it takes: hard work.”

The first step in solving the problem is admitting there is one. Blue is ready for step two in the process.