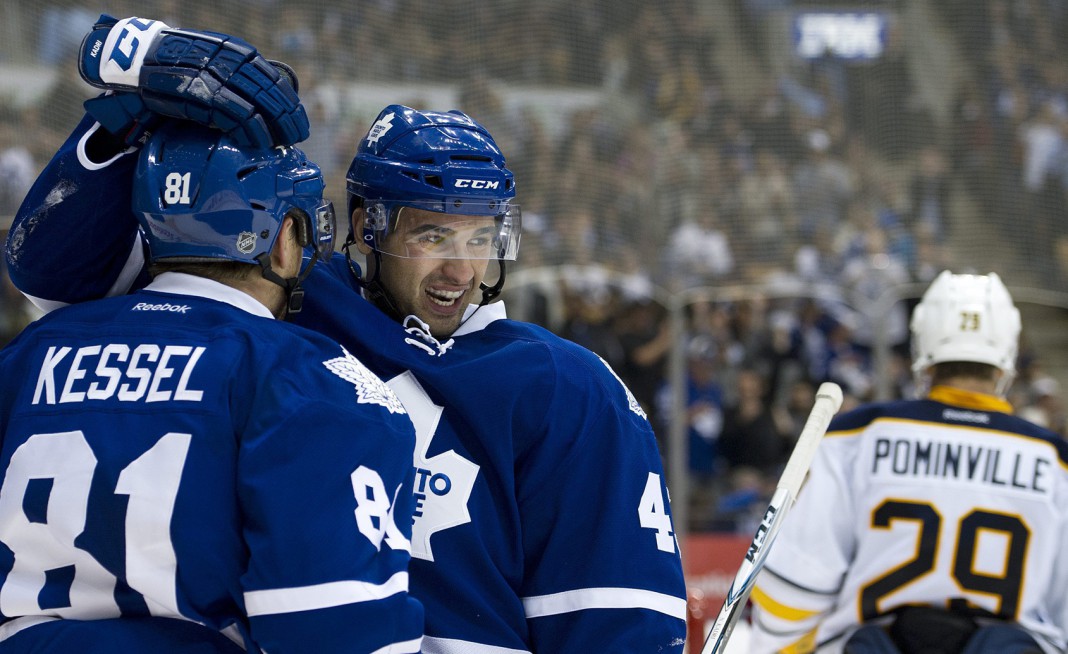 Whether it’s a yearning for hockey after a long summer or the chance to check out top prospects in play, Toronto fans tuned in for some pre-season action this past week. For the Toronto Maple Leafs, the first of eight pre-season games was played on September 30 against the Ottawa Senators. The roster consisted of a mix of player levels, including AHL and junior-level players, and featured prospective lines for the upcoming season.

Several players were cut last Wednesday afternoon, with some reporting to the Toronto Marlies, the AHL affiliate of the Maple Leafs, and some getting sent back to their respective teams at the junior level.

Drafted seventh overall by Leafs GM Brian Burke in 2009, Nazem Kadri hopes to find a permanent place on the Leafs’ roster this season. Kadri showed chemistry with Colby Armstrong and Tyler Bozak, potentially solidifying the future third line. Bozak, coming out of a pressured first-line role last season, will find comfort centring the third line while Armstrong hopes to achieve success after recovering from a season with several injuries.

Jake Gardiner, a former Wisconsin Badger, made his mark in the pre-season with two assists in the first game. Acquired from the Anaheim Mighty Ducks along with Joffrey Lupul during the second half of the season, Gardiner brings puck-moving defence with an offensive upside. He will likely join the Toronto Marlies for the majority of the season, considering the team’s current depth in defence.

Expected to take on the role as number-one goalie for the Toronto Marlies during the 2011-2012 season, Ben Scrivens has a chance to play at a higher level this pre-season. Scrivens could see some playing time for the Leafs if necessary, and will look to current Leafs goalie James Reimer as a positive example for progress.

Joe Colborne, a 21-year-old prospect acquired this past season in a trade that involved the movement of Tomas Kaberle to the Boston Bruins, was given extra chances to prove himself after struggling during the first game. At 6’5”, he is expected to grow into his size and use it to his advantage as an offensive forward in the coming seasons.

Dion Phaneuf will enter his second season as team captain, and hopes to bring a full season of strong leadership after missing just over a month of playing time early last season.

NHL.com experts have chosen the Toronto Maple Leafs and the Winnipeg Jets as the Eastern Conference dark horse teams this season.

Fan excitement is expected to be in full force come October 6, when the regular season opens up for the Leafs against their division rival, the Montreal Canadiens. A playoffs position would place the Leafs at their highest finish since pre-lockout in the 2003–2004 season.