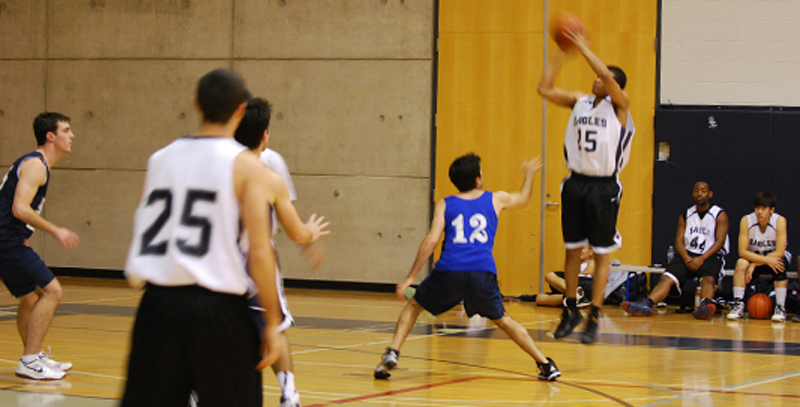 Considering the final score of 60–45 in favour of UTM White, those who missed the game might think that the game was a runaway for UTM—but that wasn’t the case.

Both teams struggled early in the game; the referees were strict and the teams were fouled constantly throughout. There was also a lot of scrambling and turnovers.

UTM got the first basket of the slow-starting game. UTM’s Daniel Pinnock netted the first 3-pointer of the game, and by the first timeout the score was 11–8 in UTM’s favour. That lead quickly faded when Law scored five points in a row.

UTM pushed back into a lead of 17–13, after Pinnock and Jordan Lisacek each scored a layup. Law quickly called a timeout, which worked in their favour when they got nine points in a row.

This was a tough stretch for UTM as Law’s Put Pyia drew two fouls and Robert Puibish drew one. Combined, both Pyia and Puibish earned three of those nine points.

When the game resumed, the points went back and forth until UTM’s Pinnock scored a 3-pointer and tied the game 24–24. From that point on, UTM barrelled ahead and never looked back.

Manny Gill, Zak Khan, and Josh Somi pushed UTM ahead with a score of 43–35, Gill with four points, Khan with a layup and a free throw, and Somi with two 3-pointers.

Adam Elsenstat drew a foul soon after and snatched two points for Law, but UTM quickly retaliated and snagged another four points. Khan, Gill, and Julian Niera took advantage of Law’s late-game struggles and forged ahead with six more points.

“Manny Gill was the leader of our team,” said Lisacek. “He had a rough first half of the game. He wasn’t motivated and he had difficulty focussing. But he got past that. By the end of the game, he had 15 points. Without Manny, we probably wouldn’t have won the game. He deserves props.”

Harpreet Gill, UTM White’s coach, admitted that this game wasn’t their best. “To be quite honest, I don’t know how we won this game. We played poorly,” said Gill. “I guess it shows character, though. The guys knew what to do.”

UTM White said goodbye to many of their veteran players at the end of last season. “We have six new players on our team this year. We’ve struggled to integrate the new players with our veterans. But we’re slowly getting there,” he continued.

UTM White, who suffered a humbling loss in their last game against UTM Blue, were determined to win this game. But it was easier said than done.

“We had the best intentions,” said Lisacek. “Unfortunately, the referees didn’t let us play our game the way we wanted to. We play a very physical game, so we had to adjust our style of play to avoid getting fouls. Once we did, we were able to pull ahead of Law.”

Not only did they pull ahead, UTM White finished big—15 points ahead of their opponents. UTM White plays their next game at Scarborough on Wednesday, November 9 at 8 p.m. against the UTSC Raccoons.