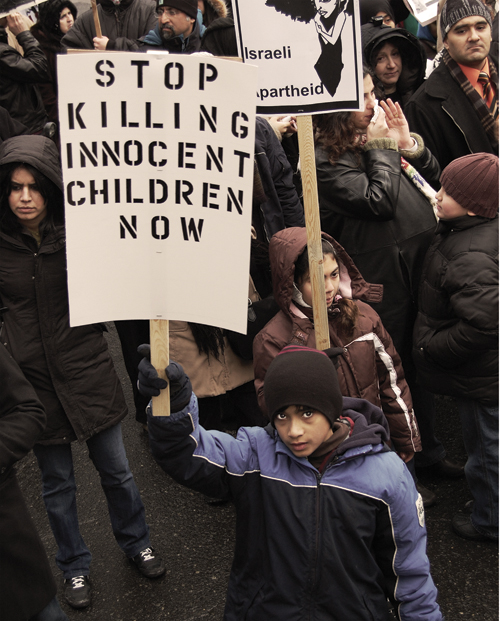 In freezing temperatures last Saturday afternoon, nearly 15,000 protesters turned out to protest the on-going humanitarian disaster in the Gaza Strip. The mob of protestors also included a large contingent of University of Toronto Mississauga (UTM) students. Organized by the University of Toronto Mississauga Student Union (UTMSU), three buses brought supporters to the downtown protest at Avenue Road and Bloor Street, which coincided with hundreds of other Gaza protests worldwide.

The protests have grown in strength since Israel stepped up its military campaign in Gaza over this past week, resulting in large numbers of civilian casualties including many women and children.

Chanting Fight the power, turn the Tide!/End Israeli Apartheid! and Throw a shoe at Israel too! the protesters vocalized their opposition to what some protesters called Israeli crimes against humanity. The organizers passed donation buckets amongst the crowd urging those who gathered to not only put in your spare change, but to empty your pockets as well as any jewellery. The protesters also welcomed Jewish Rabbis from New York who gave their support for Palestine and their disapproval of Israels actions.

UTMs Ministry of Social Justice (MSJ) leader Steven Zhou says that all of his regular members turned out for the protest, and that he was amazed by the amount of support for the crisis in Gaza. I’m extremely delighted about this since people are paying attention to the [humanitarian] issue and the crisis in Gaza, he remarked, adding that unfortunately, it took hundreds of dead Palestinians to capture mainstream media attention.

Israel is trying to get the Gaza Strip to meet what they call the Deterence Capacity, which basically means for Hamas to lose authority and to increase Israeli control within the Strip, Zhou explained. The Israeli army broke the ceasefire in early November by killing seven militants in Gaza. On top of that, numerous human rights organizations have agreed on Israel’s appalling human rights record, especially in Gaza where food, water, and electricity cannot get in and the borders are totally controlled by Israel.

The resulting humanitarian disaster, as families run out of food and are constantly under threat of aerial bombardment, is one that the world must act to condemn, added Zhou. The MSJ plans to address these issues, along with a number of other controversial topics, during the upcoming Xpression Against Oppression week, starting on Tuesday January 12 and ending on Thursday with a lecture by Dr. Norman Finkelstein in CCT 1080 at 6 p.m.

Focusing on the humanitarian aspects of the conflict allows a broad consensus to be built, as UTMSU has done through the Gaza Coalition. The purpose of this Coalition was not to divide students on campus as this Coalition does not serve to take any sides but rather to unite students on the issue, explained UTMSU President Wasah Malik. Its first main purposes were to ask for a ceasefire by all parties. The second purpose was to demand the Israeli government to allow basic necessities such as food, fuel, and medical supplies to be entered into Gaza.

Rather than taking sides with the government of Israel or the Hamas government in Gaza, the main purpose of the protests are to bring attention to the lives being lost, the lives being destroyed. I know that students at UTM want a ceasefire in Gaza from both parties and want all civilians to be able to live a peaceful life, remarked Malik.

Approximately seventy UTM students have turned out for Gaza Coalition meetings, and have started reaching out to other organizations such as the Red Cross and Islamic Relief in order to continue building support. UTMSU also plans to spearhead a fundraising drive in order to raise money in support of Palestinian families. UTM Students at the coalition also decided to fundraise money to send relief to Gaza through various events such as Xpression Against Oppression, a Fundraising Dinner and Fundraising Movie Night, said Malik.

The weekend protests, which began three weeks ago when Israel launched its assault on Gaza, are slated to continue every weekend until the war ends. There was also an evening candle-light vigil at Mississaugas Civic Centre on Thursday, drawing over one hundred protesters including former Liberal MP and current Ward 6 City Councillor Carolyn Parrish.

With notes from Mathew Filipowich