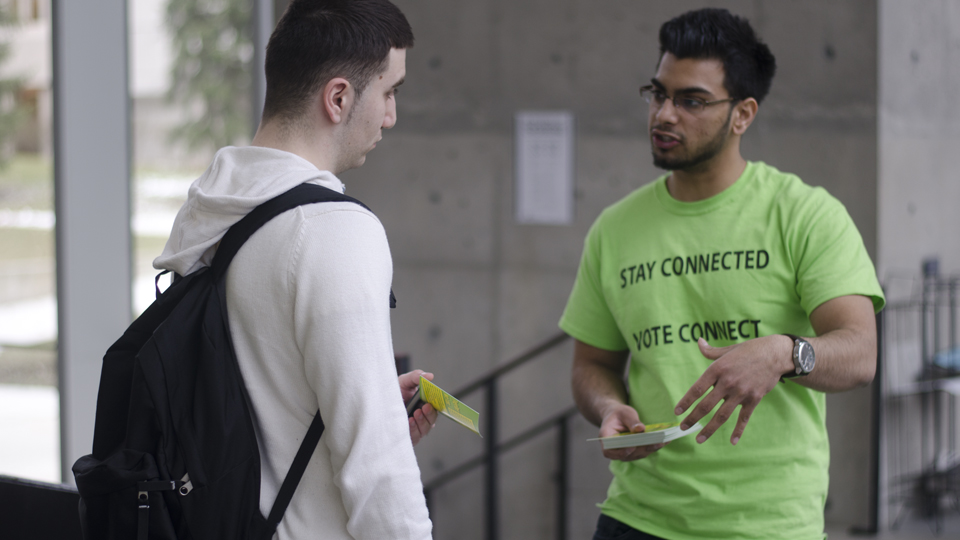 The UTMSU elections for spring 2013 are underway, with UTM Connect  running unopposed in pursuit of all available executive positions, with the exception of the position for vice-president equity. This is the third consecutive year that a team is running for UTMSU without opposition.

The Medium requested an interview with the slate, but the interview was cut short when candidates refused to answer questions related to their platform points until the questions had been approved by the chief returning officer, Sana Farukkh. The CRO is hired by the student union and is responsible for overseeing and enforcing the rules of the election. The remainder of the interview was conducted through email after the questions had been approved by Farukkh.

No reference has been made to reviving the Student Centre expansion, a referendum for which failed this year.

When asked what was meant by “progressive academic policies”, Ansari said that UTMSU had successfully lobbied in the past for late withdrawal without academic penalty, which is an option UTM students can use for up to three credits, and the credit/no credit option, approved last year, which can be used for up to two credits. Ansari also said that the new Campus Council would be implemented this year and that he would be working with others to propose reforms if necessary. He also confirmed that he will be lobbying for the drop credit policy.

“We are going to work with other student unions, faculty, and the administration to make sure that we implement progressive academic policy that is not just punitive,” he said.

“The drop credit is such a policy,” Ansari continued. “However, it is important for us to carefully examine the parameters of its implementation and educate our members and other stakeholders on the policy.”

When asked how she would lobby for more multi-faith space on campus, VP equity candidate Saafan said she would involve all stakeholders.

According to Saafan, she is working with the current VP equity, Yasmine Youssef, to amend the multi-faith space report, which is a review, analysis, and set of recommendations to the university about space at UTM.

On the topic of campus accessibility, Saafan said that “improvements can be made. As our beautiful campus grows, so should our commitment to make it accessible.” The accessibility coordinator, Ankita Nayar, along with the equity team, administrated an accessibility audit this year.

International students were covered under OHIP until the service was cut in the 1990s in response to the province’s fiscal crisis. The Ontario government has also scaled back on OHIP services for citizens.

“This is outrageous,” said Theodore. “Our team believes that UHIP provides very limited emergency health coverage and is not accepted universally by physicians, hospitals, and clinics in Ontario.”

She added that international students often pay up front for expenses in excess of OHIP rates because they are limited by their private health insurance plans. “We have heard of experiences where international students have been refused to see a doctor due to the fear of costs associated with the procedure,” she said.

In answer to a question about the feasibility of eliminating interest on deferred tuition fees, Theodore responded, “It is very feasible. The university should not be making money off students who have deferred their tuition fees because they are dependent on loans. It is unreasonable for the university to profit from the most vulnerable. We shall lobby the Governing Council and its committees.”

Havili, running for VP part-time student affairs, said he will advocate for students who are enrolled in as low as 20% of a full course load to be eligible for OSAP. “Unfortunately, students with a disability or mature students are impacted by the current designation,” he said. “UTM Connect is committed to advocating for more grants and less loans.”

Adam’s platform includes improving fees for Orientation Week, which she says will be done by hiring a sponsorship coordinator. According to Adam, $25,500 was set aside in the current fiscal year.

“Pending board approval, we will advocate for $30,000 to be set aside for orientation programming and our goal will be to have a deficit-free Orientation Week,” she said.

Noronha’s platform includes lobbying to create a “Welcome Week”, something like frosh but for all students regardless of year of entry.

When asked how he would reduce tuition fees, Noronha responded, “Our lobbying efforts will continue. However, we shall develop a different strategy. As a team, we will connect with other student unions on a collective strategy to lobby our provincial government to invest more in postsecondary education and reduce user fees, such as tuition fees.”

The annual executive all-candidates debate will be held on Monday, March 25, from 12 to 2 p.m. in the Blind Duck Pub. An hour is allotted to candidate opening statements, 30 minutes to questions, and 35 minutes to closing statements. The date, time, and location of the debate were not publicized until Friday evening.

Since there is only one slate, the debate is also being advertised as a question-and-answer period to give students an opportunity to pose questions to the candidates.