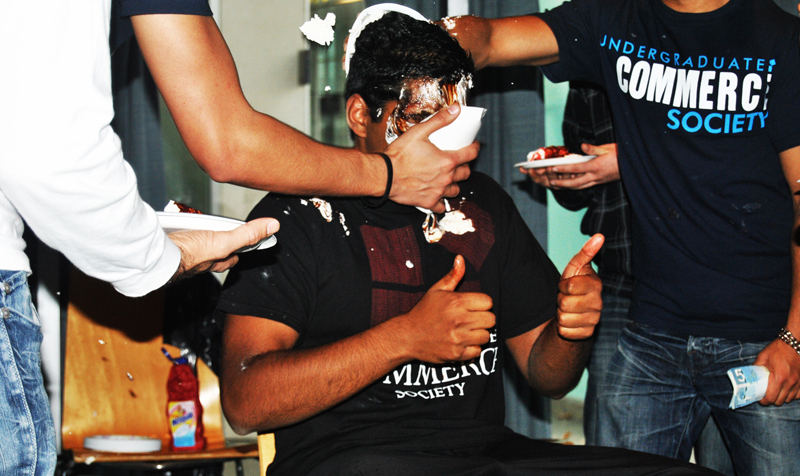 The Undergraduate Commerce Society filled the Blind Duck Pub with thumping bass beats, shaved heads, and flying pies for the Fair for Hope on Thursday.

The Blind Duck swelled with enthusiastic volunteers, cheering students on to give whatever they could in an effort to raise money for the Canadian Cancer Society. At booths with video games, baked goods, authentic Indian cuisine, and photographs, all proceeds were donated to the cause.

Students volunteered to sit on a wooden chair on the main stage of the pub and appeal to the crowd for donations. Whenever a target was met, a pie was thrown at their face, making a sloppy mess of whipped cream.

“Getting hit with a pie felt awesome, though my ears are still ringing,” said Michael Jameson, a fourth-year finance student. “It made me feel silly, but it’s for a really good cause.”

Anyone could sign up to be pied for whatever amount they had in their pocket. After the price had been named, people would pool their money together and each had the opportunity to throw a pie.

In the first half of the event, the school had raised a few hundred dollars. That was before one confident student hit the stage. He promised the crowd that if they could raise over $100, they could throw pies at any part of his body. A few minutes and $500 later, over a dozen people volleyed gooey pastries at him.

The booths at the event were run by various campus clubs. The Erindale Gaming Association offered a booth with various Nintendo games and a donation jar beside the screen, the Pakistan Youth Alliance dished out delicious chicken biryani, and the UTM Student Support offered designer henna tattoos. The clubs were funded partially out of their own budget and partially by a special donation from UTMSU.

“All of these clubs come together for a common cause,” said Aimen Pervez, a representative of UTM Student Support. “Cancer research is a very big cause.”

Hundreds of students flocked to this event to watch the show and donate to the cause.

“It’s great to see people give what they can,” continued Pervez. “We all needed a small break from school in order to relax and chill out. And what better way than to raise money for cancer research, grab some good food, and watch a bunch of people getting pied in the face?”