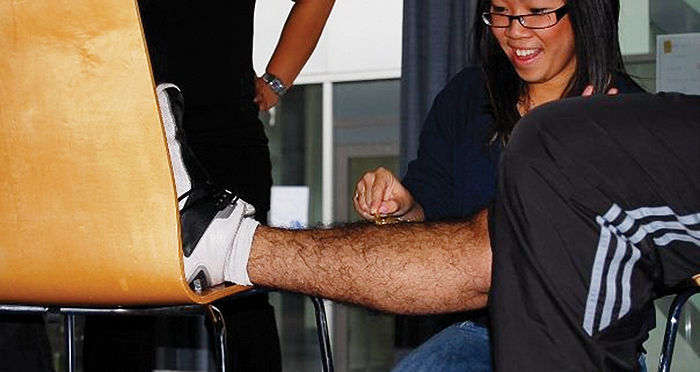 On October 15, students gathered at the Blind Duck Pub from 12 to 3 p.m. to raise funds for the Canadian Cancer Society. The fundraiser, dubbed the Fair for Hope, was led by fourth-year student Sunil Shah and kicked off at noon with performances by student Loral Decoy and the Music Club.
Students volunteered to have their heads shaved on stage as the audience bid on the volunteers.

The highest bid went to Shah, who had previously announced that he would cut more hair off for every $50 donated. (His bid soared to $200) All Shah has left to keep his head warm are two scraggly bangs and a mess of uneven hair at the back of his head.
The highlight of the event occurred when a first-year student volunteered to have her hair completely shaved off.  Other female students who donated their hair had it styled later in an impromptu appearance by Out@UTMs Afi Browne.

Students volunteered to pose as targets  for the events pie-throwing auction while other attendees bid to throw pies at their colleagues faces. Bids ranged from $5 to $75. The sole $75 bid was placed when UTMSU President Joey Santiago volunteered to be a target. Because three students made the combined bid, three pies headed Santiagos way. Asked how he felt afterwards, Santiago replied using the favoured frosh cheer, Oh, I feel so good!

The Fair for Hope received support from UTMSU as well as UTM academic societies and clubs. The Erindale Gaming Organization set up an Xbox and a Nintendo Wii on a television in the Student Centre presentation room and a donation to the Canadian Cancer Society allowed students to play Halo and Brawl.

Draws for raffle prizes were held throughout the duration of the fair, which included tickets to Screamers and Halloween pub and Toronto Argonaut tickets. UTMSU, the Undergraduate Commerce Society and the Forensics Society provided the prizes.

Everyone knows someone who has been affected by cancer. The Canadian Canter Society is such an important organization. Were so thankful for everyone that came out; the response from UTM was amazing, said Rand Abdulnour, a Fair for Hope organizer.

Last year, the CSS raised nearly $200 million for cancer research and support. It is estimated that about 150 thousand people are diagnosed withcancer each year, making the organization and the individuals and groups who contribute to it a necessity.