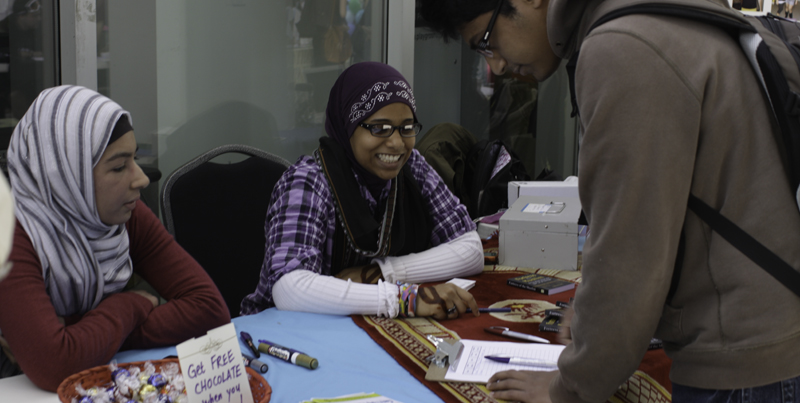 ﻿﻿﻿The  annual Clubs Week featured societies and clubs from the arts, athletics, charity/volunteer work, religions, politics, sciences, local/national issues, and other fields. Current club members spoke with curious students about the nature of their club and the club’s planned events for the academic year, and to provide answers to students’ questions.

Throughout the week, academic societies and clubs assembled exhibits in and around the Student Centre to inform and recruit potential members. Colourful posters and enticing music attracted numerous students to get involved in the campus community.

“I love English,” expressed English and Drama Student Society (EDSS) executive member, Ellise Ramos. “English is a small program, and I feel we have more of a sense of community as opposed to other programs. I want to bring English out to the UTM community.” In regards to what the society offers, president Trevor Abes replied, “Poetry slams. We’ll have a major writer as a guest speaker, and essay workshops for first-year students,” as well as publishing a third EDSS anthology. “It’s to share our love of literature.”

Other arts-oriented organizations, such as the UTM Music Club, also wanted to give students the opportunity to participate in a common interest. “We want musicians and artists to come together to bring music to the UTM campus,” said president Umar Syed. “Whether you play well or not, it’s all about the music. We’ll be hosting open mic nights, jam sessions, music lunch hours, talent shows, and a charity dinner.”

A variety of athletic organizations also hoped to bring something new to UTM. “I love soccer,” declared Sabiha Sumra, UTM Soccer Club events co-ordinator,. “I want to inform more people about soccer culture, which is dead at UTM.”

Alongside soccer recruiting and competitions, the club intends to screen soccer documentaries to provide students with a better understanding of soccer culture around the world.

“We noticed there wasn’t a club for students in terms of tennis,” said Anita Tewari, VP External of the Tennis Players Association, a new club on campus. “We’re a club that allows people of all skill levels to play tennis—a great way to get into the sport if you’ve never played before, and a great way for players to meet other players.”

Other athletic clubs are tailored to seasonal sports. Meeting co-ordinator Lynn Tran of the University of Toronto Ski and Snowboard Club said that the club “is a great opportunity to meet other students at the University of Toronto and to make friends with people who share my passion for winter sports.” The club offers eight trips to Blue Mountain over an eight-week period between January and March (available to those who purchase a Club Membership).  “It’s a way for me to improve my snowboarding skills because I am able to make progress by going consecutively.”

There were also charity organizations. The Erindale College Special Response Team, affiliated with St. John’s Ambulance, is one. “We’re the medical first-responders on campus,” said  Kirushanth Gnanachandran. “We train all our members and provide standard first-aid courses at a discount rate.”

Other clubs included the “Style and Profyle” fashion and dance show. “It’s a fundraiser for different charities throughout the world,” explained vice president Lenita Abraham. “We focus on providing education to children and university students who want to study but don’t have the means to.” This year’s Style and Profyle theme is “Love and Lust”.

“Last year we sponsored a university student to come to UTM from Somalia, whose refugee camp was in Kenya,” added vice president Lahiru W. “He’s currently studying at UTM.”

A sponsored student’s first-year costs are paid for in full. In second year, the Student Refugee Program, subsidizes costs and helps the student find employment.

Nourah Irfan, PR Officer of the Student Refugee Program, added that WUSC (World University Service of Canada) “sends profiles of refugee students to our committee, and we look at which student is the most suitable for UTM.”

“It’s a lot of fun,” expressed the director of Sisters of Substance, Veronica Marchuk regarding the charityorganization Continental Rescue Africa. “We do a lot of work in Ghana and Uganda. We take children through educational, social, and self-esteem programs.”

The week also showcased many clubs that focus on other student interests. President Suvrat Barar of the UTM Debating Club explained that the club is “a forum for University of Toronto students to come out and debate.” One of the group’s goals this year is to organize a professor debate. “We’ll get professors to debate about a topic they’re interested in and invite others to watch,” said Barar.

The UTM Gaming Club was also popular. “I joined because it’s a fun way to have social activities on campus involving games,” said Michael Hansen, the club’s social co-ordinator. “There’s a good community behind it.” Vice president Megan Gallagher added, “We play all kinds of games … we play casual games  and video games.”

For a full list of academic societies and clubs at UTM, as well as information on how to register a club, please visit the UTMSU Clubs website at www.utmsu.ca.