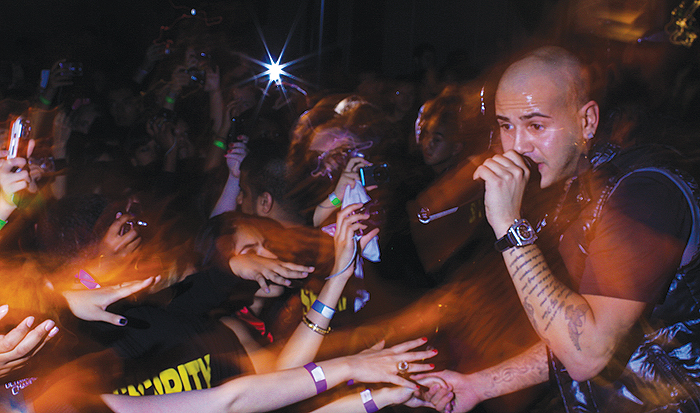 The Blind Duck was packed last Thursday night when hordes of students lined up for the second pub night of the year In bold departure from previous years, UTMSU VP Campus Life Andrew Lalla decided to hold the Get Schoold Pub Night a week after the first. Traditionally the second pub night is held months after the first pub due to poor ticket sales. This anomaly occurred due to the buzz surrounding the main attraction of the pub night: an appear- ance and performance by home grown Canadian pop sensation Danny Fernandes.

All 500 tickets were sold out and stu- dents scrambled to get their hands on spare tickets. By midnight, with Fernandess performance imminent, fif- teen dollar tickets were being sold for up to twenty-five dollars each.
Inside, pub goers danced the night away with drinks in hand. The security staff took extra precaution, presumably due in large part to the presence of a celebrity at UTM.
Camera flashes lit up the Presentation Room as students lined up to have their pictures taken against a red carpet style backdrop from UTMSU.
Shortly after midnight, the MC for the evening, E.N.G, took over the stage to hype up the audience. The students, mostly the ladies, rushed to the stage in anticipation of the main event. The dance floor became crowded as E.N.G. took the chance to mock Kanye Wests stunt at the MTV Video Music Awards and shouted out at the crowd, Hey, Ima let you finish, but UTM has Danny Fernandes!

Fernandes made a grand entrance by pulling up in a black Cadillac Escalade outside the Blind Duck. Escorted by his security through the sea of fans, Fernandes hit the stage hard, stating he was happy to be home. Screams made him almost inaudible. Blind Duck security surrounded the stage to ensure none of the star struck students got out of hand.
Fernandes came onto the stage with backup dancers following his cues. Fernandes started his set with the song Private Dancer and then followed it up with his first hit single, Curious. Fernandes then stopped the music and serenaded the audience by singing the first few lines of Fantasy. Then the backing track went on and Fernandes went into a full rendition of the song. Fernandes and his dancers got the audience involved by encourag- ing them to sing and dance along dur- ing his entire performance. After the show, fans had the opportunity to meet Fernandes and have pictures taken. The night ended in high spirits as stu- dents left the Blind Duck. Second-year student Marina Stojanovic expressed her excitement for upcoming events. I was really surprised to see how well the pub night was organized. It was my first pub night and my friends and I had an amazing time.