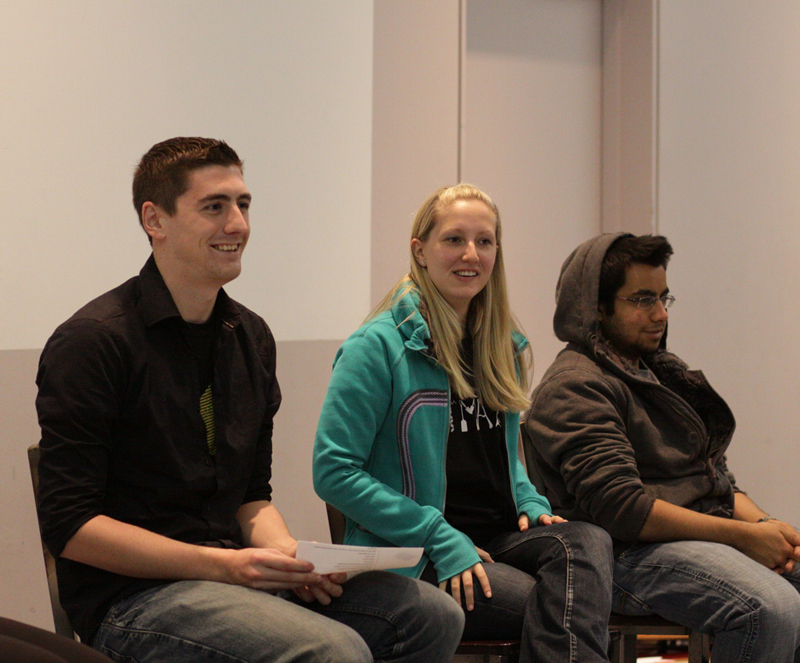 The University of Toronto Mississauga academic societies and UTMSU came together on Thursday from 3 to 5 p.m. to host the first-ever Student Leader Panel. A group of upper-year students used advice from their own experiences to help first- and second-year students survive and thrive in their university careers.

The panel was made up of student leaders such as Vickita Bhatt, president of UTMSU, Mike Chan of the Canadian Asian Student Society, Lisa Brown of the UTM Anthropology Society, and Christopher Loayza of the Undergraduate Economics Council.

“The transition from high school to university can be intimidating,” observed Chan.

For the first hour of the event, the panel advised students in the audience about academic issues, extra-curricular activities, and student services. Addressing issues such as how to deal with difficult courses, how to get involved, and how to get into graduate school, the panel doled out advice, recommendations, and personal stories in order to help new university students. They also talked about their own freshman years and what kinds of things they’d do differently if they could relive those years.

Many of the panelists emphasized the importance of time management, setting up study schedules, and learning to deal with procrastination.

The student leaders spoke about how to keep up with a course, the benefits of getting involved with academic societies (which include free food, higher confidence, and better speaking skills), and the “hidden gems” at UTM, referring to the student services available, such as the Career Centre, financial aid advising, the Health and Counselling Office, and the RAWC. They also listed and the pros and cons of taking summer school.

Finally, the student leaders answered questions dealing directly with certain courses at UTM and certain professors. One such question was, “How do I deal with professor Bailey?”

“Don’t take first year lightly,” said Utsab Das from the Erindale Biology Society. “You may feel distracted, but first year is the basis. If it goes well, usually the next three years will be smoother.”

“My first year here, one of my professors told me to try not to fall behind. Keep up and don’t cram. Study every day,” said Timea Maxim, president of the Erindale Biology Society. “Everyone knows it but nobody does it.”

It was evident from the leaders’ advice that first year is just as important as the subsequent years. First year is the year to start looking at graduate school requirements, earn high grades, decide on subject POSTs, and get involved.

“The main vision of this event is to help first-years out,” said Bhatt. “We [upper-years] wish we had a student panel to tell us what university was all about. We had stumbling blocks too and we’ve been there. We find that first-years don’t know what services are available to them and we wanted to let first-years know that UTMSU and the academic societies are here for them. Many are not aware of what academic societies provide for them, what clubs are there, so we’re here to educate them on the services and how to get through these four years of university without stressing out. If they have an idea, they can just come and get involved. We hope this event continues on every year so that students can learn from our experiences.”

“I wish someone told me in first year how important first-year classes really are, in terms of GPA,” said Loayza. “As students progress to higher years, they will realize that it gets much harder to bring up their CGPA, due to the fact that most upper-year courses are only worth 0.5 credits. If a student does well in first year, they will be weighted as 1.0 credit, which will help them a lot.”

The event started as an idea of Chan’s last summer while he reflected on how to help some members of his club who were struggling in their first year of university.

“A lot of members of CASS were failing in courses, so I thought of how I could help them out. I brainstormed for weeks,” said Chan, who then went with an idea of a student-led advice session to Monica Scott from the Career Centre, who helped him to “mould” his idea.“[Failing courses] is common. I just want to try to change that. I didn’t think it would be this big. Monica moulded the idea for me. She said, if it’s happening in your club, it’s happening at other clubs—so why not collaborate with all the societies? Grayce [Yuen] took the idea on and sort of spear-headed the event.”

“We discussed a session with student leaders sharing their own experiences of how their engagement in their academic societies has enhanced their learning and experience at UTM,” said Scott. “This could be a way of assisting new students with ideas about developing skills and experience that would be helpful to them during and after their postsecondary education. The Career Centre supports opportunities for student leaders to share and reflect on their experiences, as this maintains and further develops a strong culture of leadership on the UTM campus. To that end, these discussions with Mike and other student leaders over the summer and early fall resulted in this panel, which will really benefit our community.”