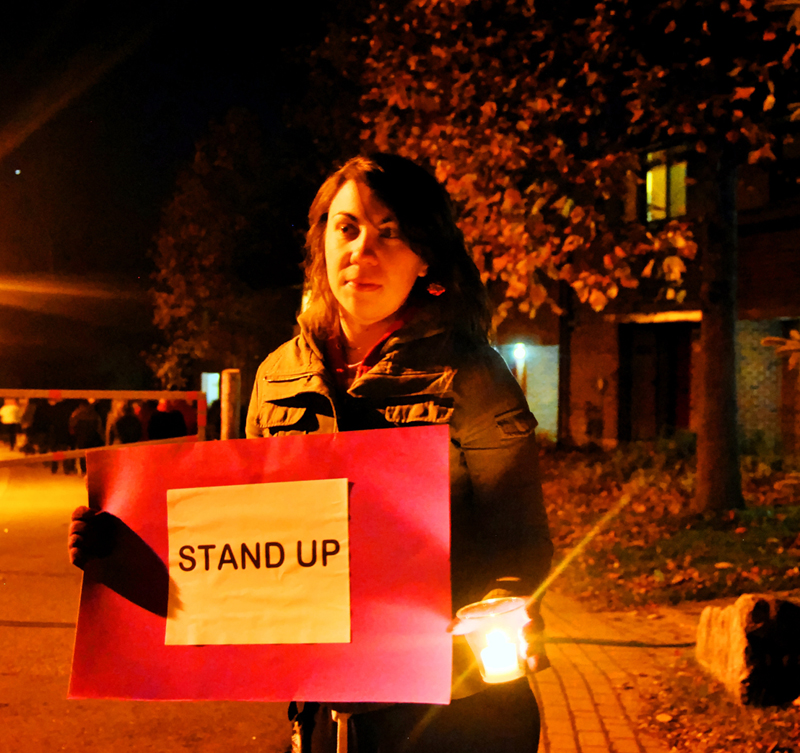 Students and staff braved the freezing cold and attended UTM’s “Light the Night” event last Thursday. The event was organized by Student Housing and Residence Life to raise awareness about the many different types of violence and suffering that go unchecked in our society.

The event started at 9 p.m. outside Oscar Peterson Hall, where the area had been set up with tables covered in lit candles in plastic cups, microphones, and audiovisual equipment. Students and friends gathered around the candles and listened to the speakers’ presentations.

Madison Peters and Jenna Menzies opened the presentation by explaining the purpose of the event and its efforts to raise awareness and act as a campaign against the spread and impact of violence. They shared that this year’s event would be donating approximately $400 to the anti-violence charity called LOVE due to the successful efforts of the penny drive they had conducted.

Students listened intently as different speakers and organizers followed, all approaching the microphone to contribute their remarks.

A video clip was shown that included many of the volunteers and organizers holding signs displaying important facts about violence that were written on their hands.

Just before the clip started, the group was told to reflect on someone close to them.

“I want you to think of someone you love and know. It could be a boyfriend or girlfriend, a family member, or a best friend. Picture them in your mind,” an organizer said.

Following the video, students were each handed a candle and led on a campus night walk by Tamara Bernstein, who explained that they were to be silent while walking.

Most students were dressed appropriately for the very cold night.

“It was freezing, but worth it. I used the candle to warm my hands,” a participant remarked.

The silent body of students walked proudly with their lights all the way to Leacock, around to the William G. Davis Building, the Five-Minute Walk, past Theatre Erindale, and back around to the Roy Ivor lobby.

Along the walk volunteers and organizers were holding the signs seen in the video. They were intended as reminders for the students of why they were showing their support by walking. Meanwhile, passersby stopped to watch a golden trail of students with candles blazing across campus.

Students were greeted by warmth, hot chocolate, and cookies in Roy Ivor after the silent walk. There was an opportunity for attendees to line up and add hand-paint to some of the art developed for the event.

“It was a really nice event—very powerful and moving,” a student commented.

Students and friends mingled in the lobby afterwards, sharing experiences and snacks and generally celebrating the night.