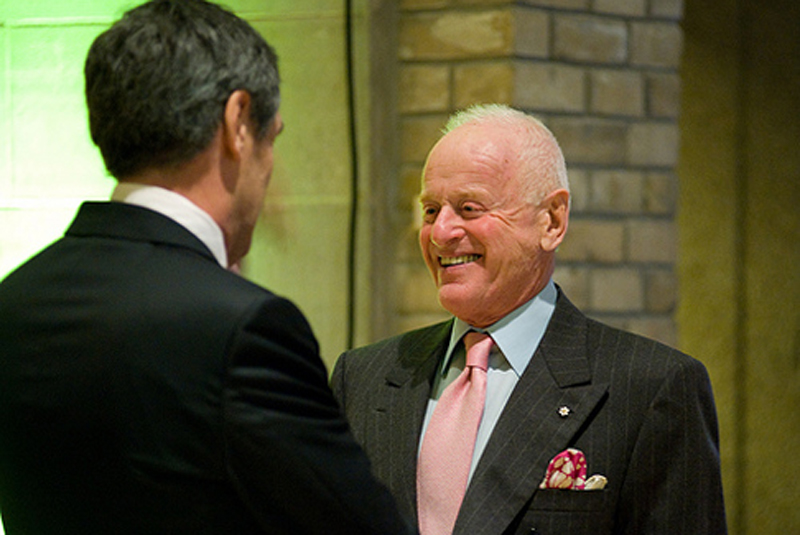 In 2010, Canada’s own philanthropist Peter Munk, who created the mining giant Barrick Gold Corp., gave the University of Toronto the largest single gift it has ever received from an individual: $35 million to U of T’s Munk School of Global Affairs.

The donation supports Munk’s vision that is underlined by his support of Canada’s role in the world. Munk believes Canada is largely unappreciated by many Canadians born in Canada.

“We are a country of peace, law, justice, freedom, and free education. We have the largest multiracial society in the world,” he said. “Canada is as good as it gets.”

Still the chairman of his mining company at the age of 83, Munk said, “It is your obligation to give back as much as you have taken from a country. I consider myself considerably lucky. … I’ve made some money and I wish to give it back.”

Munk and his wife Melanie have chosen to give away most of their fortune to education and health care through their organization, the Munk Charitable Foundation. Because it is his alma mater, Munk chose to give his education funding to the University of Toronto, where he was sent from his home in Switzerland to study.

“My first soccer game, my first university dance, my first social events—coming from war-torn Europe—all took place at the U of T,” he said.

Munk helped to create the Munk Centre for International Studies a decade ago and has now made it possible for huge expansions to be made to the Centre with his donation.

Janice Stein, director of the Munk School of Global Affairs, commented, “With Peter, it’s about the vision, the objective you want to achieve.” Stein said that when she first met Munk a decade ago, when the Munk School of Global Affairs was just starting, he already had a “vision and commitment … to educate young Canadians to become global citizens.”

Munk has also made large donations to the healthcare sector, primarily to the Peter Munk Cardiac Centre at the Toronto General Hospital (now part of the University Health Network). Munk said he did this because he realized that heart disease, which he said was endemic in his family, “also happens to be the number-one killer in Canada”.

Dr. Robert Bell, president of the University Health Network, said Munk is a humble man who wants the spotlight to be on those working at the cardiac centre.

“He really gets it, that it is crucial that you to bring folks together and recognize them and give them the sense that they are doing something that is great… He’s a very proud Canadian and he emphasizes how Canada gave him so much … He wants to see Canadian healthcare recognized around the world.”

Two Canadian institutions that are world leaders in their fields were created partly on the donation given by Munk. The Peter Munk Cardiac Centre at Toronto General Hospital, a leader in treating cardiovascular disease, was started by $6 million from the foundation in 1997, and it received another $37 million in 2006—the largest gift ever to a Canadian hospital.

In 2000, Munk’s foundation donated more than $6 million to start the Munk Centre for International Studies at U of T. In April 2010, he contributed $35 million to expand it into the Munk School of Global Affairs. It will be one of very few international institutions offering graduate degrees in global issues.

Munk also supports the Technion-Israel Institute of Technology in Haifa, Israel, and established the Aurea Foundation to fund public policy discussions in Canada.