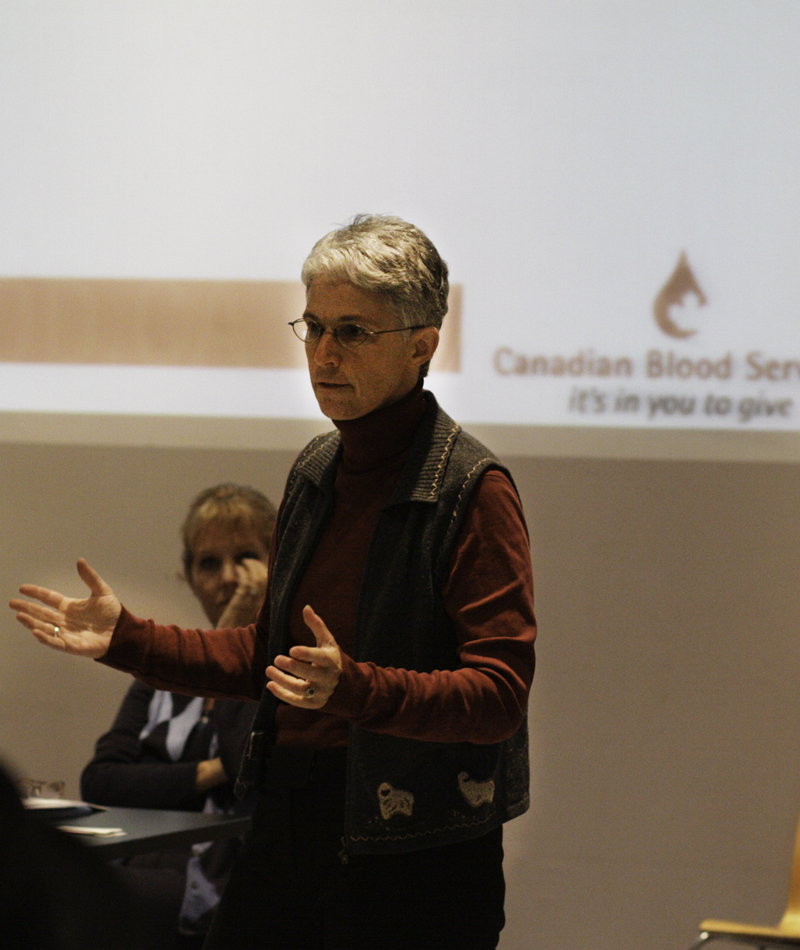 Last Wednesday, UTMSU’s Ministry of Equity in collaboration with OUT@UTM hosted a panel discussion regarding MSM (“men who have sex with men”) blood donors. The event was one of many included in the tri-campus Queer Orientation week.

Students piled into the Presentation Room in the Student Centre to learn and engage in the “To Ban or Not to Ban” discussion. VP Equity Kumari Giles introduced the panel and encouraged the audience to be prepared with questions once both sides of the issue had been presented. Barbara Hannach and Lorna Tessier, representatives from the Canadian Blood Services, started off the discussion with a presentation describing the circumstances of the policy.

MSM requires that any male who has had sex with another male after 1977 be issued an indefinite deferral for giving blood. The origins of the policy stem from the 1985 Tainted Blood Tragedy, one of the largest public health disasters in Canada’s history. Over 1,100 Canadians that had received blood transfusions had contracted HIV/AIDS. About 700 of these victims died, and over 20,000 Canadians became infected with the hepatitis C virus.

According to the Canadian Blood Services, public trust in blood transfusion procedures was lost and blood donations reached a significant low. Stricter requirements were enforced until research could provide insight on ways to create effective screening procedures. Since the tragedy, the permanent restriction on MSM candidates has been debated and reviewed, but not yet lifted.

With improvements in technology, the CBS conducted a policy reassessment in 2006; however, it was deemed that there is still not enough evidence to ensure that patients receiving blood transfusions from MSM donors will be safe from infection. Hannach and Tessier declared that the gaps in information could be filled by conducting further research and that it is possible that the policy could be amended if it is proved that MSM donations are risk-free. For now, the priority is the patient and not the donor.

The chairperson for the Ontario chapter of the Canadian Federation of Students, Sandy Hudson, introduced the “End the Ban” campaign and lay down arguments to discredit claims made by the CBS. The campaign seeks policy reform to better comply with deferral periods that are currently enforced for heterosexual male donors. Taking the matter a step further, the CFS Ontario accused the CBS of upholding a policy based solely on stereotypes of the queer community.

The CFS representative argued that the policy discriminates against identity rather than behaviour.

Instead of denying all MSM candidates, the policy should take into account the use of protection, the type of sexual interaction, and whether the donor is in a long-term monogamous relationship.

Hudson referred to policy changes in other countries that allow for behaviour-based deferrals. She pointed out the discrepancy of duration for deferrals between heterosexual and MSM donors. Heterosexual donors that have engaged in risky sexual activity can be deferred for twelve months, whereas MSM donors are deferred for life.

Hannach and Tessier responded to Hudson’s statements by pointing out that the only two countries that have completely changed policy to behaviour-based restrictions have since experienced an increase in the contraction rate of HIV/AIDS.

Hudson, the CFS-Ontario chair person, argued that the circumstances of the 2006 policy investigation repudiate the credibility of the outcome. The decision to maintain the ban came down to a seven-to-six vote, with five members absent. Hudson also stated that presently, heterosexual women are contracting the disease at a faster rate than men; nevertheless, it still stands that there are three men for every woman that is currently diagnosed with HIV/AIDS.

“Patient safety is our first priority,” said Tessier in defence of the policy. “We are making every effort to research and find a solution to reverse the policy.”

“The policy perpetuates the stereotype that all homosexual men have HIV/AIDS,” said Sean Uyeda from the Peel HIV/AIDS Network. “The policy affects the LGBTTQ community in a very negative way.” Both Uyeda and Hudson continually referred to the sexual orientation of the donor candidates rather than their behaviour as men who have sex with men.

During the question period, UTM student James Raleigh stated the difference between MSM and queer donors. “MSM shouldn’t be interchangeable with gay,” said Raleigh. “It is the behaviour of an MSM candidate that is being denied, not whether he is gay.” In fact, a homosexual male can donate blood if he has never engaged in sexual activity with another male.

Queer Orientation ran all week long and also included a panel discussion on developments in the queer press, athletic activities, a talent show, meet-and-greet events, the annual Homohop, and various other activities for the LGBTTQ community and allies to interact, learn, and enjoy themselves.