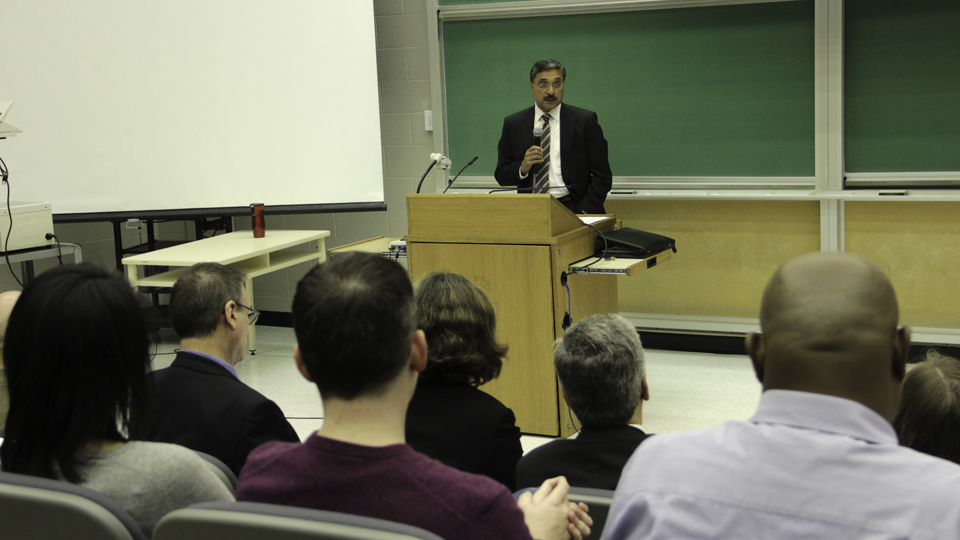 About 40 people attended the first principal’s town hall at UTM, held in light of the changes in governance that took place this July and saw the Erindale College Council, an advisory body, replaced by the Campus Council, a decision-making body.

“While UTM’s governance needs outgrew the old Erindale College Council, its value as a forum for broad-based exchange of ideas was worth preserving,” said Principal Deep Saini on his Facebook page. “Therefore, the UTM administration is introducing this town hall—which is one of two planned this year—to capture, indeed expand, that spirit of open communications and consultation.”

In a lecture hall in the Davis Building last Monday, Saini made short welcoming remarks before the structured Q&A session. Staff, faculty, and students had been invited to register and submit topics of interest and questions in advance using an online form.

One priority that Saini outlined was creating more high-quality spaces for classrooms, teaching and research labs, faculty and staff offices, study areas, student services, and cafeterias, which he said would be taking place through the recent construction and renovations. The second priority, he said, is to lower the student-to-faculty ratio, the difficulty of which Saini attributed to a lack of space for offices for new faculty. The final priority Saini mentioned was to increase services, especially those related to student success and counselling, and later to expand student aid and scholarships, fundraise for new faculty positions and capital projects, and raise UTM’s profile in the community. Saini also cited a massive increase of the proportion of international students in UTM’s population over the last decade.

After the introductory remarks, the pre-submitted questions were read along with prepared answers by various high-ranking members of the staff. The Q&A period began with questions in the theme of transportation and infrastructure. The first question was, “Why aren’t there more parking spaces?”

Paul Donoghue, UTM’s chief administrative officer, said that another parking deck project is in plans for implemenetation in 2016.

“Parking is expensive and there’s no way around that,” Donoghue continued.

He added that the cost of the new deck, which is estimated at $8 million, will be partly covered by the surplus in parking revenue over expenses that the service currently generates thanks to the introduction two years ago of an automatic parking price increase of 3% per year.

One question concerned cars speeding on campus. Donoghue replied that although there are several measures in place, including speed bumps, dedicated crossings, and signage, UTM cannot issue speeding tickets because it is private property.

The question “Why doesn’t UTM offer healthier, more affordable, and more diverse food options?” was also answered by Donoghue, who said that physical space is a challenge. Next September, when Phase 1 of the North Building construction opens, there will be more options, he asserted; another improved food source will be Colman Commons in the Oscar Peterson Hall residence, which he said will undergo renovations next summer.

Other topics that came up were water accessibility on campus now that UTM is bottled-water-free; the creation of more multi-faith space; the cost of the Middle Entrance; smoking too close to building entrances, which Donoghue said the campus could not legally enforce; and whether UTM will implement flat fees.

Mark Overton, dean of student affairs, said that the administration is looking at converting larger spaces into a larger number of smaller spaces to be used as multi-purpose areas, including multi-faith spaces for quiet meditation or reflection, and explained that peer pressure is key in reducing the amount of people smoking at building entrances.

Donoghue summarized the process by which the university developed the redesign of the Middle Entrance signage, which received coverage last week in the National Post and Global News TV. He added that UTMSU has recently appointed a student to fill the student seat on the Space Planning and Management Committee, which approved the project.

Amy Mullin, vice-principal of academics and dean, addressed the drop-credit policy, which she said undermines the “faithful and accurate record of the courses taken and grades received”. She reiterated that instead of the drop-credit, a later drop date and the credit-no credit policy were implemented.

Mullin also answered the flat-fees question, saying, “That’s a simple one. No, UTM doesn’t have plans to introduce program fees at this time.”

The question “What effort is the University of Toronto making to ensure tuition is affordable and accessible?” was also answered by Mullin, who attributed the university’s dependence on tuition to the province’s failure to commit to funding increases to keep up with inflation.

Diane Crocker, UTM’s registrar, answered the question of whether or not UTM will have a fall break by saying that “it’s on our radar”. The St. George campus has a new two-day fall break this year on November 11 and 12.

The administration then took questions from the floor.

UTMSU president Raymond Noronha raised an issue, saying that because students had to submit their questions online before the town hall, it was not an open forum. “I noted that [for] a lot of questions that were submitted by myself and others, I don’t think we got accurate responses,” said Noronha.

One such response, he said, was the claim that there would be designated multi-faith space in the renovated North Building, which Noronha denied. Overton clarified that he had meant multi-purpose space that could be used as multi-faith space.

Noronha also reopened the Middle Entrance question: “The problem with the sign is that it has a million-dollar price tag attached to it, and that on the SPMC there was no student representation […] there was no chance for UTMSU to receive any feedback.”

Saini replied that this portion of the Q&A constituted an open forum, and that questions had been invited in advance for the structured portion to ensure that students who could not attend in person had a chance to ask questions.

On the subject of the Middle Entrance, Saini said, “What some people have chosen to do is to take pictures of one aspect and put a tag of a million dollars on it. Their intentions are, of course, not to tell the truth. The redesign involves a whole slew of things of which you have been personally made aware, not once, not twice, but more than that.  […] Let’s talk about apples as apples and oranges as oranges.”

The final questions included a request by UTMSU’s executive director, Walied Khogali, calling for the university to investigate its mental health strategy and a question by a student about the tendency of ethnic groups on campus to stay closed and homogeneous rather than to disperse and mingle with other groups.

A faculty member raised questions about why flu shots are offered only to students and not faculty and staff; Overton directed him to the Health and Counselling Centre. The faculty member also complained about perpetually wet washrooms and asked whether the replacement of paper towels with hand dryers in campus washrooms was really necessary.