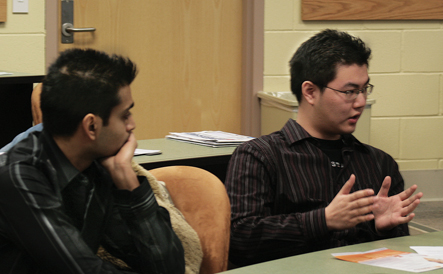 Howard Hampton has initiated a leadership race in the provincial New Democratic Party (NDP) by announcing that he will step down from the position he has held since 1996 when he took over from former Premier Bob Rae. As a result, candidates for the soon-to-be-empty leadership chair of the Ontario New Democrats — Peter Tabuns, Michael Prue, Andrea Horwath, and Gilles Bisson — have been touring the province trying to build support. As part of that campaign, a leadership debate was held at UTM on February 5 in the Kaneff Centre.

Organized by the UTM NDP club, three out of four candidates presented their viewpoints on some of the key issues confronting our society today. Tabuns, Horwath, and late-comer Bisson each offered their perspective of where the problems lie and how — should they win the leadership — they would tackle those problems.

UTM NDP executive member Steven Zhou, who is the groups event coordinator, was pleased with the turn-out of thirty students and staff, and added that after hearing all the different points of view he is  having a hard time deciding who he is going to support.

When asked to address Ontarios current economic crisis and how they would create jobs in the future, Tabuns laid out an all-in-one package which he referred to as the Green Energy Economy. Were not dealing with easy times in Ontario today, Tabuns acknowledged, before adding that  creating new employment or manufacturing opportunities that also reduce carbon emissions is a big part of the solution.

On the other hand, Tabuns notes that there isnt an economic strategy in place at the moment. Currently over $40 billion is spent on energy in Ontario each year, and to create more jobs here in Ontario, we need to spend some of that money here, said Tabuns.

Andrea Horwath went further and predicted a painful recession. She maintained that, Although big things like energy manufacturing are good, we also cant be losing our good old jobs. Since one out of seven jobs in Ontario depends on auto manufacturing, if we dont have an auto sector, we dont have an economy anymore.

She referred to her plan as a Legacy Investment in Public Transportation, noting the long list of communities that are clamouring for light rail, for example. Many manufacturers in Sudbury want their goods transported by train instead of truck, citing growing fuel costs and environmental concerns. Horwath also anticipated that more public transit will also get people out of cars, and thereby reduce green house gas emissions.

The next question was about the York University strike and the back-to-work legislation introduced by Dalton McGuintys Liberal government last week, and all three candidates noted that they did — and would again, if given the chance — block the legislation from quickly passing. Rather than apologizing for delaying the return of 50,000 students, the candidates turned instead to principle, with Tabuns noting that it was the Liberal government that abandoned the students and chose to side with York, which interferes with the good faith aspect of the collective bargaining process.

The only thing workers have is the ability to withdraw their labour, added Horwath. Graduate students and TAs are educational workers, so why shouldnt they get a decent pay? Horwath also pointed out that the university had no incentive to bargain with the union (CUPE 3902) because they had already struck a deal with the government to end the strike and therefore could reject whatever CUPE offered.

With post-secondary students in mind, the leadership hopefuls were asked about another controversial topic: tuition fees. Arriving late due to a schedule conflict, Gilles Bission captured the audiences interest when he took a strong stand against tuition fees, insisting that we have to move towards the total elimination of tuition fees. Contrary to the traditional system, Mr. Bission mentioned that post-secondary entrance should be based solely on academic performance, and not on whether one can afford to pay or pay back tuition.

To finance the repayment of university tuition fees, he came up with an alternative strategy: instead of giving out OSAP and charging huge amounts of interest on it, which is also increasing overall student debt, he proposed a one and one-half per cent surcharge on income tax. That way, students will not be graduating with huge financial burdens, but rather pay off their tuition as they pursue their careers.

For his part, Tabuns offered an alternative strategy to lower tuitions fees by rolling them back to 2003 levels and freezing them there. His answer, or rather a question, was quite simple: Do you want to have an educated population in Ontario? Tabuns mentioned that in the last provincial election, the NDP proposed to raise more funds for post-secondary education by eliminating corporate tax breaks and increasing the taxes of people who are making more than $140,000 a year, which would allow the government to increase grants and decrease loans.

Perhaps the most contentious question was about separate, religious school boards created within the public system, similar to the ill-fated musing of Ontario Conservative leader John Tory in the 2007 election. Every candidate suggested that there may be far more pressing issues in Ontario right now — jobs, the environment, or tuition fees — which are more pressing than separate schools, and this had such a divisive effect in the last provincial election. As Tabuns put it, If we care about the future of this province, we have to think about what we want to debate. We have to focus on other principal questions that dominate the life of this province and try to work through those issues, rather than dealing with the issues we find dear to our heart.

Horwath boldly added that education is not the most important issue. She pointed out that we need to first deal with the under-funding of public schools in general. We need to look at schools that do not have enough resources to provide education for kids whose second language is English, she explained. Even children with special needs do not receive enough funding…and some schools are physically falling apart.

Horwath suggested that Ontarians need to find a common ground and build upon that instead of having separate religious schools, since this erodes money away from the public system.

In the end, political debates are all about the candidates performance — whoever it is that can look, sound, and act the most sincere, spontaneous, and smart under intense pressure. From that perspective, each candidate performed well, though many students in attendance were particularly impressed with Bisson, who one attendee described as having the aura of a leader.

Professor Brent Wood commented that Bisson was a captivating speaker and that his interactive rhetoric was fascinating to behold – 19 years as a constituency politician have left him a master of a kind of dialogue that would work with the blue-collar crew as well as intellectuals, country folk and city folk. The real test, however, will come at the NDP Convention in Hamilton, when the leader is chosen.