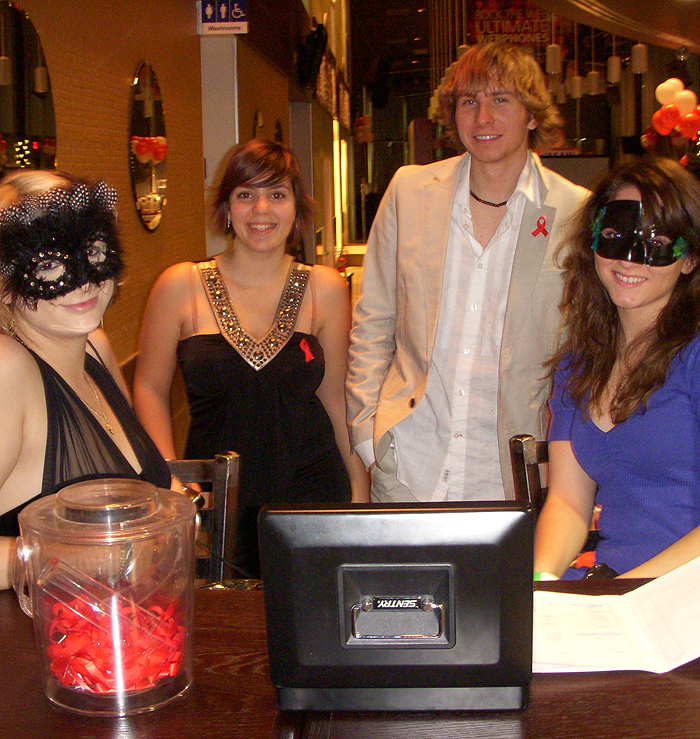 Last Friday, the UTM Sexual Education & Peer Counselling Centre  hosted the first World AIDS Masquerade Ball. With the slogan  Finally a Party with Taste, the ball was held in the Blind Duck to raise donations for the Peel HIV/AIDS Network.

Upon entering, students chose from a selection of funky masks that were laid out on the pool table. Bunches of white and red balloons and twinkling white lights were strung around the room. Food was served buffet-style and servers went around offering drinks to attendees. Singer Natasha

Randhawa kicked off the night. Attendees danced to tunes played by a DJ from UTMs CFRE Radio.

A table displayed various prizes up for grabs during the silent auction. Related clubs and organizations on campus supported the cause, and donated gift baskets for the auction. Out@UTM donated a basket of coffee and chocolate. The Health and Counselling Centre provided a U of T sweater.

A favourite amongst attendees was the Basket of Feminism offered by the UTM Womens Centre, which included a shirt that read This is what a feminist looks like. UTM S.E.C and UTMSU offered other prizes, including Lush baskets and the Lovers Basket that included items from the Everything To Do With Sex Show.

Attendees could also play games to win raffle tickets. The participant had to throw a bean bag into one of the holes in a board and answer a question related to HIV/AIDS. Peel HIV/AIDS Network (PHAN) provided the information.

This event is such a positive atmosphere. And the games were fun and informative, said student Elleni Javier.

PHAN provides support for those affected by HIV/AIDS, and information to educate people and promote understanding. The organization, based in Mississauga, Brampton and Caledon, was founded in 1991 and is the only HIV/AIDS service provider in the Peel Region. A representative from PHAN gave a brief presentation about their organization at the Ball.

S.E.C. and other participating groups wanted to give students a fun way to provide support for prevalent issue, said organizers.

My uncle died of HIV/AIDS. My family doesnt like to talk about it, but its important to deal with stigmas surrounding the disease. Im proud to be part of this event to raise awareness and donations, said Out@UTM member Afi Browne.

S.E.C. coordinator Maeve Tremis was pleased with the way the event had turned out. This year we wanted to include the UTM community in a fun way to circulate knowledge about the cause. The disease isnt discriminatory.

Attendees were in high spirits and enjoyed the festivities. Student Jason Carnevale noticed that a few balloons had come loose and floated to the ceiling. The balloons coming loose represent the awareness that has been raised at this event. It was a job well done by S.E.C.
Students can look forward to Sex Pub, the next S.E.C. event, coming up in March.