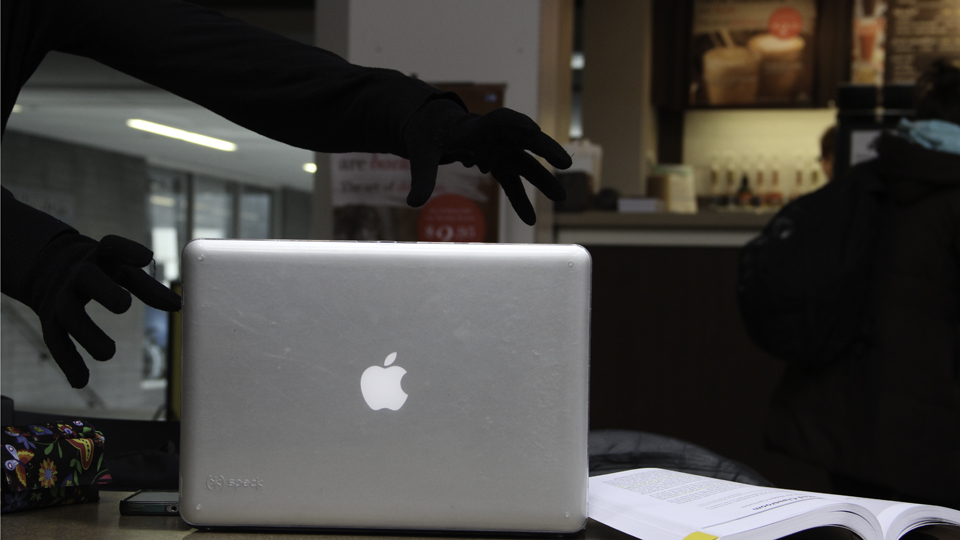 Campus police are reporting a high number of thefts on campus since the start of January.

Since January 1, there have been thefts of several Apple products: three MacBooks, one iPhone, and one iPad 3. Four of these thefts occurred in the Instructional Centre and one in the Kaneff Building.

According to Campus Police, on January 31 two MacBooks were stolen from the Instructional Centre at around the same time in the afternoon after students had left their belongings in the front of the lecture hall of room 110 during their midterms.

Last Monday, a student sitting at a table to the left of the Second Cup in the Instructional Centre near the front doors of the building was using her MacBook Pro when she got up to go to the bathroom, leaving her computer unattended at the table. Though she was gone from the table for about 20 minutes, it took only eight seconds for her laptop to be stolen.

Campus Police have footage of two suspects as they enter the building, take the laptop within eight seconds of the student leaving the table, place it in the male suspect’s backpack, and immediately exit the building.

Len Paris, the special constable and manager of Campus Police, says he doesn’t believe the suspects seen in the video footage are students, and that they could be professional thieves.

Because the two suspects are wearing hats and the cameras are angled in such a way that the faces are not visible, police are still investigating. It appears that the two individuals are both Caucasian, probably between 20 and 30 years of age, and wearing black coats. The male is of medium build and average height. The female is of heavier build and also of average height.

On January 18, an iPhone 4S was stolen in the library, and a female student has been arrested and charged for stealing it and subsequently selling it to a store in Mississauga as a used phone. It was then resold to another student. When it was activated, police traced it and managed to track it back to the woman who stole it. The woman is expected to appear in court in the next five weeks.

Paris said that Campus Police have made two arrests recently in residences in regards to thefts.

Two male students who live in residences have been charged with theft under $5,000 for stealing an iPad 3 and are expected to appear in court on February 15.

Three weeks ago, a student left his computer in an unlocked locker at the RAWC while he went to work out. When he returned, the computer was gone.

“You have to treat these items like cash. You wouldn’t leave $1,000 in cash on a bench, but people leave their computer on a bench unattended,” said Paris. “Would you expect $1,000 in cash to be there when you come back?”

Paris says there are some security measures that students can take to protect themselves, including using a password and installing encrypted security software on their phone or laptop so that the item can be traced if it is stolen.

There were 104 thefts of personal property in 2012. Thefts typically occur in the residences, in the library, and in study areas, said Paris. In almost every case, the property was left unattended and the owner was gone for anywhere between five minutes and three hours.