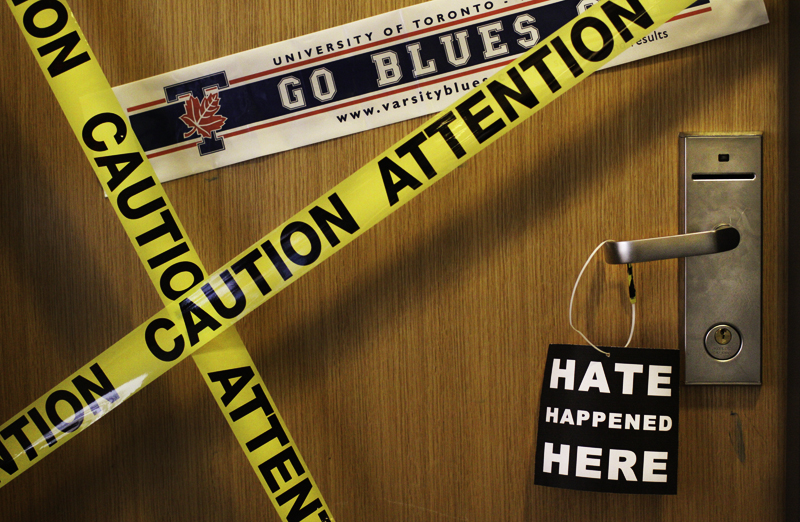 Last Sunday a student’s door was vandalized in Oscar Peterson Hall. The words “FUCK YOU FAGGOT. EGYPTIAN SLAVE BOY” were written on the door in black marker.

The hate crime was reported to a Residence Life staff member, who immediately removed the graffiti.

An ongoing investigation between Campus Police and Peel Regional Police started immediately after the incident was reported. On September 20, Dale Mullings, director of Student Housing and Residence Life, sent an email to all students living on residence in the hope that the culprit or someone else with information would come forward. Approximately 1,100 undergraduate students live on residence during the school year; hopefully there was someone around who witnessed it.

“In a diverse learning community like ours, such cowardly acts of hate and bias are unacceptable.  Discrimination on any level is inexcusable, and hate is never a punch line,” said Mullings in his email to residence students.

“It’s really surprising that something like this would happen on our campus,” said Patrick Redegeld, a fourth-year biology and psychology double major and member of OUT@UTM. “UTM prides itself on its diversity and acceptance, so hearing that derogatory statements like that were written on someone’s residence room is upsetting and disappointing, regardless of if it was just a prank or joke.”

Another hate crime on the UTM campus involving the use of black marker, happened over the summer. Someone wrote “Gay Boob Man” on a construction sign outside the CCT building, and OUT@UTM members quickly erased the graffiti and replaced it with the message “HATE HAPPENED HERE”.

“It is unfortunate to hear that something like this has happened on our campus, but this is also a time to educate students about the effect of using and perpetuating discriminatory and hate-based language,” said Kumari Giles, UTMSU VP Equity. “Hopefully, updates will be given on the resolutions, and that this instance is used as a talking point for positive change for students on and off residence.”

The UTM Student Housing & Residence Life Community Standards for students living on residence outline five levels of disruptive behaviour and how it is dealt with.

Level three of the disruptive behaviour outline states, “Behaviour threatens individual and/or community safety and wellbeing, or is destructive to property. Incidents involve explicit breaches of university policy. Examples include but are not limited to: vandalism and/or damage to residence buildings and property and open display of exploitative or harassing materials.” Consequences include educational sanctions, fines, community service, or behavioural contract; these consequences are determined by a Residence Life Coordinator and/or the Community Standards Board.

Level five of the same outline states that if the event is a significant violation of university policy or provincial or federal law, which includes harassment, the culprit will be considered for eviction and/or UTM Campus Police involvement. The Dean of Student Affairs is responsible for deciding whether an offence is deemed level five and what the appropriate consequences should be.

In deciding the appropriate action to be taken, considerations will be given based on the extent of the misconduct, the inadvertent or deliberate nature of the misconduct, whether the act in question is an isolated incident or part of a series of repeated acts of misconduct, and any other mitigating or aggravating circumstances.

Anyone who has information about such incidents, including this most recent one, is asked to contact a Residence Life Staff member or the Campus Police at (905) 828-5200.