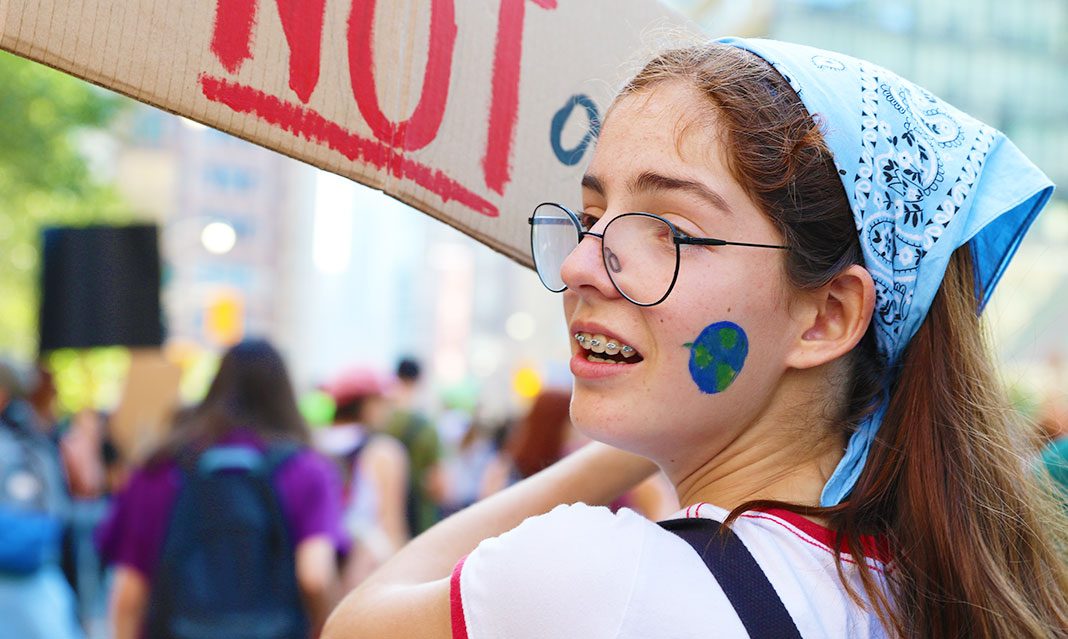 Thousands of people took over the area in and around Queen’s Park, U of T’s downtown core, last Friday to take part in the climate strike rally for climate justice.

The rally began at 11:00 a.m. where demonstrators protested, hoisted up signs, drew murals on the pavement, and camped out on the south lawn at Queen’s Park. Music, professional stilt walkers, and public speakers were some of the entertainers that took the main stage set up in front of the Ontario legislative building.

Demonstrators were equipped with handmade signs that read: “When leaders act like kids, kids act like leaders,” “Listen to our Warning,” and “There aren’t many Jobs on a Dead Planet.”

“We’ve got to vibe-check leaders on the planet,” said one student in the group. “It’s part of our responsibility. We’re out here showing support for climate action.”

Kosalan, a fifth-year journalism student in the cohort, validated the significance of the global climate strike. He explained to The Medium that the strike was not just reserved for young people but was an open call for everyone to fight the climate crisis.

“It’s important for all types of people—people from schools and workers from businesses, the young and the old—to be out here because now is the time,” said Kosalan. “Every major scientific study is showing that our planet is facing a very serious threat, with massive economic and health consequences.”

“This is a nonpartisan issue,” he continued. “It’s a global issue.”

“We can no longer continue with business as usual. This is a crisis. Our governments need to treat the climate crisis like the emergency it is,” said the event’s Facebook page. Over 14,000 Facebook users indicated that they were in interested in attending. GreenPeace Canada approximated that between 15,000 to 50,000 demonstrators were in attendance. The Toronto Police pegged the number as between 15,000 and 20,000.

“I’m here today because I realize that mine and my sister’s futures are at risk,” said Anahita, a grade nine student from Oakville attending the strike with her mother and younger sister. “This is something everyone, from all backgrounds, can get behind. This isn’t an issue that affects only Liberals or Conservatives. This is our future and we need to take control of it.”

Toronto Police officers on bicycles and in cruisers cordoned the demonstrators and redirected traffic.

“We’re not concerned about the demonstrators; we’re concerned about someone seizing this opportunity to draw attention to their cause,” said Toronto Police Staff Superintendent Randy Carter to The Medium. “The police are here to ensure that people can demonstrate safely. We want to ensure that there’s no interference from others who may cause harm.”

“No one is arguing that this cause isn’t valid. We all know we need to take action to improve the state of our planet, and that’s why the police are here—to ensure that citizens can have their voices safely heard,” Carter continued.

Kevin Imrie, a marshal for Global Climate Strike Toronto, shared with The Medium his thoughts on Friday’s demonstration.

“It’s Toronto’s portion of what’s happening globally. There were four and a half million people marching last week. We’re letting young people take the lead on this issue and it’s everyone’s responsibility to support them.”

Climate demonstrations took place across the country on Friday, including a rally in Montreal that saw Greta Thunberg, the teenage climate activist from Sweden who spurred Friday’s global action, take part. Over half a million demonstrators were in attendance.

Thunberg said the protests have been successful, calling Friday “a very good day” during a press conference in Montreal.

In a tweet, Mayor John Tory said the Toronto Sign was turned off Friday “in solidarity with all those taking part” in the Global Climate Strikes.