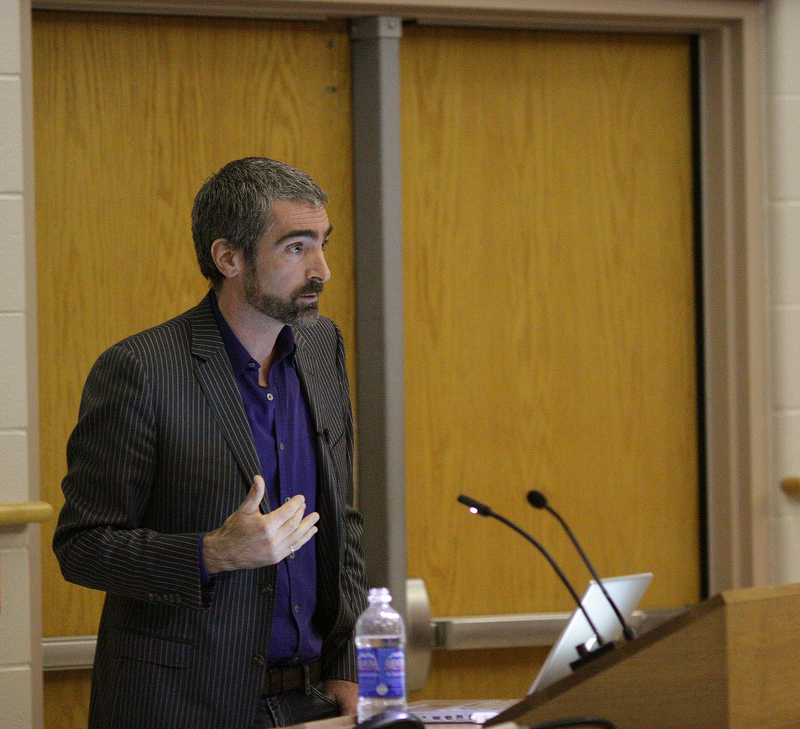 On Wednesday night, Tom Rand, a venture capitalist and environmentalist, gave a public lecture at UTM. The University of Toronto doctorate alumnus discussed alternative energy sources to fossil fuel and the immediacy with which they should be implemented. In his lecture, “Kicking the Fossil Fuel Habit—Possibilities & Opportunities: a Convergence of Capital, Science, and Technology”, Rand presented the necessary steps toward, and economic benefits of developping, the “10 Clean Technologies” that he examines in his book.

Rand began his lecture by comparing Canada’s environmental status with that of the global stage. He emphasized the detrimental direction for which Canada is headed, while other developed countries like China and Europe lead the way in environmental technology development.

“We have a prime minister who is the only state leader that has never given a major policy talk on climate change,” said Rand. “He has, I think, landed Canada squarely on the wrong side of the most fundamental challenge that we face.”

According to Rand, Canada is missing out on the largest economic opportunity of modern times. He argues that upgrading technology to reduce the carbon footprint would entail the biggest infrastructure build in human history. Rand insisted that the widespread misconception that environmentally friendly energy alternatives would lead to bankruptcy or inefficiency is inaccurate.

“Climate change is still talked about like a future threat, but it is already here,” Rand said. “Like an unruly guest at a party, it’s in the kitchen drinking beers, breaking furniture, and crashing through windows.”

Rand said that the countries that take the first steps in advancing energy technologies will reap great economic benefits. Two years ago, Rand co-developed and converted an abandoned building in Toronto into a low-carbon hotel. The “Planet Traveler” uses geo-exchange heating and cooling, solar thermal, and other environmental energy technologies.

“We could have easily met Kyoto by being more efficient and we’d be richer for it!” Rand said. “In my hotel, I’ve lowered the energy use by 75%. I’m saving money every month in energy costs. I’m making money cutting carbon! Buildings account for 40% of greenhouse gases. So when Harper says we can’t meet Kyoto because it’s a drag on the system, he’s wrong.”

Rand talked about various alternatives to fossil fuel, including geothermal, biomass hydro, wind, and solar. He said that other developed countries are investing in geothermal technology.

“In Canada, we’re spending a whole lot of money trying to minimize the amount of energy it takes to melt tar,” said Rand. “There are hundreds of billions of dollars in this country; why not do an experiment? They’re doing it in France, Australia, Germany, the United States, but we’re not doing it here. We have the capacity.”

Attendees had the opportunity to ask questions after the lecture. Geography professor Pierre Desrochers mediated the discussion.

“As could be expected, Mr. Rand proved to be a passionate and entertaining speaker,” said Desrochers.

“As for the content of his talk, in my opinion it depends on whether or not you buy into his premise that climate change is the greatest immediate threat facing mankind. I personally believe that problems such as infectious diseases and malnutritition are more pressing issues, and that this is where our scarce resources should go at the moment. To his credit, Mr. Rand was willing to debate the idea.”

“I want to get into the psychology, politics, and economics of why we’re not waking up to this problem,” Rand said about his future plans. “If we can understand the reasons as to why we’re not engaging in environmental actions, we might be able to better address the issue.”

Before the lecture, leaders of the UTM Environmental Alliance enjoyed a dinner and talked to Rand.

“People don’t want to change their lifestyle. Tom says that while lifestyle changes are important, he also stresses that the government needs to impose regulations so that people will live lead greener lives,” said Rohit Mehta, a leader of the UTM Environmental Alliance.

More information on Rand’s work can be found on his website at tomrand.net.