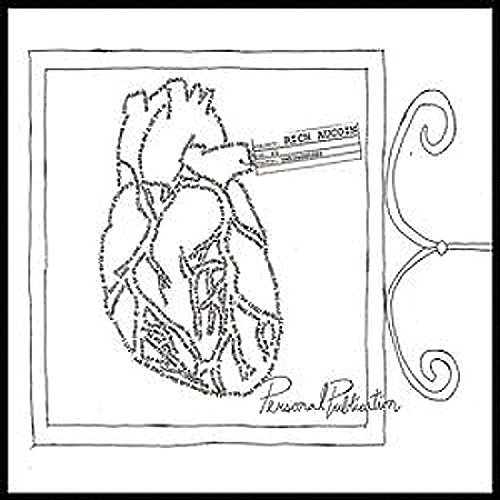 The waitress brings the drinks to the table. Two beers and a coffee. Rich Aucoin looks up and smiles. “Thanks,” he says, before getting back to the conversation, leaving his beer untouched.

“I’d always like to play with a band, but it’s easier just to have to fly one person somewhere. That’s why there are so many more successful solo and two-piece bands now.” He casually glances over at Matt, our Photo Editor, who is asking the waitress for some milk for his coffee. “Unless you’re doing really well as a band, you’re not going to make enough money to move yourselves around.” The waitress brings over some creamers and places them on the table.

“Two summers ago I flew over to Victoria and biked back [to Halifax]. I ended up playing about 45 shows along the way,” explains Aucoin, waiting patiently.

Matt finishes stirring his coffee and picks up the mug. “Cheers,” says Aucoin, and begins to drink.
This isn’t a lesson in etiquette. This is what a refreshing change feels like. “I like to keep charity and my music inseparable,” explains Aucoin, referring to the cross-Canada bike trek where he raised money for childhood cancer research as well as recorded with hundreds of musicians. “When you go to a show and pay cover, you’re out there having a good time, but you’re also doing something productive. It goes well with the feel-good style of my music.”

That’s not what independent musicians are supposed to say.  And after meeting Rich Aucoin it’s not hard to understand why the Personal Publication EP, his first and only album released to date, contains very little indie-sentiment. You won’t find anything remeniscent of what’s usually played on CBC Radio 3—no abrasive synth solos or reverbed clanging guitars. Instead, as his iTunes page so succinctly puts it, it is a true “alternative.”

An alternative to the alternative, to be exact. Aucoin forgoes all the bleak imagery and three-chord nonsense we are so used to when discussing generic “alternative music,” instead replacing them with winding piano melodies and songs about kings in faraway places. And yes, this is all synched to the film adaptation of  Dr. Seuss’ How the Grinch Stole Christmas.

“Did you ever see The Dark Side of Oz?” asks Aucoin, referring to the cult-film phenomenon where The Wizard of Oz is played in synch with Pink Floyd’s The Dark Side of the Moon. “It’s like that. I watched the Grinch about 100 times, and by that point had written out how long each track had to be and when it had to change moods.” The resulting effect is epic, to say the least. That is, if you can watch it.

“Dr. Seuss sent me a cease and desist,” explains Aucoin. The video gained an online following, but after Dr. Seuss Enterprises caught word of the copyright infringement (possibly through an unintended tip from Aucoin himself), they were not happy to say the least. The video has since been removed from the Internet—though if you search hard enough, you may be able to find one of the few remaining links. Regardless, you can catch a bit of the synch action if you check out Rich Aucoin in concert.

Over the past year his live show has transformed from a near perfect cut-for-cut rendition of Personal Publication to a more dance-oriented experience. “You will recognize the songs,” explains Aucoin, “but now it’s way more sample-laden.”

The waitress brings the bill. We pay and leave the joint. As we walk out the door, the bright afternoon light hits our eyes, and it takes a second before we start to feel the cold. We are standing on Queen Street West, the heart of Toronto’s entertainment district, and no one is around.

We start walking along the freshly seasoned sidewalk, pausing to check out some interesting features on buildings. Aucoin mentions some ideas he has for his live show in the future—including a plan to run his music through a Rock Band setup, where members of the audience play parts of his songs. “They’ll know if they mess up, the crowd will make sure.” Rich Aucoin doesn’t have to worry about messing up. His recent show at the Horseshoe Tavern—as the opening act for Everything All Time and Lioness—was doomed for success.

Aucoin made it on stage at 10 p.m.—relatively early for Horseshoe shows—yet the crowd was full. Some people had heard about the spectacular audio/visual Grinch synch and brought their friends along to witness. But there was something different about the venue that night. It all seemed more easygoing than usual—the bouncers were more pleasant, the girls more friendly, and the drinks, well, slightly tastier.

And there it was. The piece of white fabric, draped across the left hand side of the stage with a projector pointed directly at it. The music started, and so did the visual accompaniment. For the first half, Aucoin weaved in and out of old and new songs—from both Personal Publication and soon to be released Public Publication—denoted by their video pairings (Grinch footage among other public domain clips). Lyrics flashed across the screen, beckoning the crowd to sing along. Some did, hesitantly at first, and with more enthusiasm as the songs progressed. Aucoin worked as the conductor, directing parts of the crowd to sing backing harmonies while others sang melodies, as he made his way from instrument to instrument. The backing band was exceptionally tight, seamlessly moving from track to track. By the time the group had made it to the final song, “10,342 Cuts For the Us,” the audience was in a state of collective effervescence, still high from the Daft Punk sing-along a few tracks earlier.

The band geared up, Aucoin with a keyboard strapped to his shoulder. A few girls nearby waved frantically at him. “I know his friend!” screamed one of them into the other’s ear. “Oh my god—really?”

Rich Aucoin looked over the crowd, smiling with confidence as he prepared them for more harmonizing. “I know we’re going to kill it,” he said, reassuredly. But they didn’t need to hear him. It was bound to happen anyways. Download “10,342 Cuts For The Us (An Exploding)” off of Rich Aucoin’s latest album, Personal Publication, or check him out on myspace.