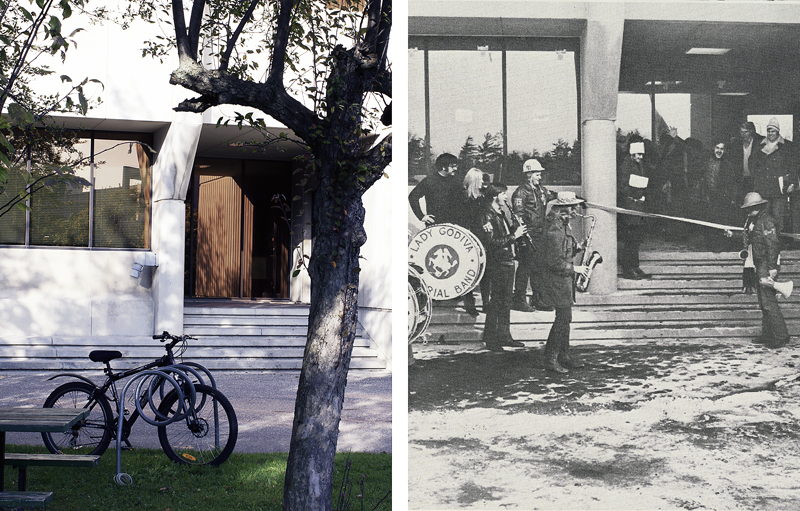 With the opening of the new Instructional Centre and the Terrence Donnelly Health Sciences Complex this year, UTM—once “Erindale College”—has completed a new chapter in its history. Over the past 46 years UTM has transformed from a small offshoot of St. George, working out of a high school, into a renowned academic centre—an integral element of the tri-campus system.

Along with numerous minor campus improvements, the Instructional Centre and the Terrence Donnelly Health Sciences Complex were completed this year—and UTM has begun a new chapter in its history.

Lislehurst, the home of UTM’s principal, can be reached via a small road jutting off the Outer Circle Road, just north of the North Building. Trees overhang the path as you pass the Anthropology Field School and the Paleomagnetism Lab. Along the way, you encounter a pond with an old bridge over it where people come to take photos.

Nestled behind the woods lie the Lislehurst grounds. The grounds staff maintain the lawn, and they do a good job. A few cars usually linger in the parking lot, and sometimes a pedestrian wanders by. In spring and summer, an occasional group of students comes to study outside on the grass. Somehow it doesn’t feel like UTM back here, yet it is.

Few students have seen Lislehurst, and fewer know what its actual purpose is. But the building is one of the few surviving landmarks of the pre-university era.

Herbert Harrie Schreiber ordered the construction of Lislehurst in 1885. The British government had awarded the land to him. Lislehurst was built out of stone from the Credit Valley and contains artwork by Schreiber’s wife, Charlotte. Cattle pastures and apple orchards lay to the south of Lislehurst—land that is now the UTM campus.

After successive ownerships, the property now known as UTM ended up in the hands of Reginald Watkins, a Hamilton businessman, and was from then on known as the Watkins Estate. In the mid-1960s, U of T purchased the estate to create the new Erindale College to deal with capacity issues at the St. George campus.

Erindale College offered its first courses in 1965 (with only 10 faculty members), but since no campus had been constructed on the property, the classes were based in T.L. Kennedy Secondary School (near Hurontario and Dundas). It wasn’t until 1966 that construction began on what is now known as the North Building, originally intended to be temporary and used for administrative purposes. Since opening for the 1967 school year, many additions and remodels have been made to the North Building, but part of the original structure remains: the cafeteria and several classrooms on the first floor.

Classes began on campus in time for the 1967 fall semester underD. Carlton “Carl” Williams, Erindale’s first principal. The class of 1967 boasted 155 students, 28 faculty, and 40 staff. Erindale was a close-knit community. Lislehurst hosted a weekly dinner for faculty and students. Colman House—named after Dean John Colman—served as the primary student space for Erindale College, and housed the offices of The Erindalian (the predecessor of The Medium), Radio Erindale (now CFRE), and the first pub on campus (called “Ugly’s”—isn’t that catchy?). The site once occupied by Colman House was later replaced by Oscar Peterson Hall.

Even in 1967, when cows were hanging out across the road, the campus was growing, and space was becoming more and more important; Ian Still, a chemistry professor and part of the original faculty of Erindale College, recalls how chemicals would linger in the air during labs, due to the low ceilings in the North Building.

In answer to this need, architect Raymond Moriyama, in conjunction with A.D. Margison & Associates, put forward an ambitious design for expansion of the campus. Following the same theme that John Andrews, who had designed the UTSC campus, had proposed a few years earlier, Moriyama planned the creation of a megastructure in the centre of the campus, with surrounding green areas and living spaces.

The first part of this structure, the South Building (now known as the William G. Davis Building), was completed in 1971. Although several additions to the building were completed in later years (its library, common area, laboratories, etc.), the building never achieved its original intended design. During this time, the campus moved from Colman House to a portable along the Five-Minute Walk. The new portable was officially known as the “Erindale Campus Centre”—but unofficially as “The Blind Duck”.

The 1970s and 1980s were a difficult time for Erindale; rumours were spreading that it would be shut down. UTSC and York’s Glendon campus were in a similar predicament. On this count, U of T President Dr. James Ham had to reassure students to the contrary for a number of years.

The provincial government decided that there was excessive capacity in Ontario universities and cut off further funding for expansion. During this time, only a handful of student residences were constructed, with the exception of the Crossroads Centre (built in 1974 under the name “Erindale Academic Plaza”), which was used for student and faculty offices, as well as retail space­—it once housed a CIBC. The Crossroads Centre was rebuilt and redesigned into the Student Centre in 1999, though the original club offices remain.

It wasn’t until the year 2000, when Sterling and Finlayson completed their new master plan for UTM, that the campus was revitalized. With the construction of the Communication, Culture and Technology Building (2004), the Recreation, Athletics and Wellness Centre (2006), and the Hazel McCallion Academic Learning Centre (2006), the architects sought to incrementally build the campus around the landscape.

This Sunday I stood at the roundabout around Davis, Kaneff, and the Student Centre. The CCT building and HMALC appeared among the trees beyond, sunlight reflecting in the glass and steel.

Until then, we have snapshots.