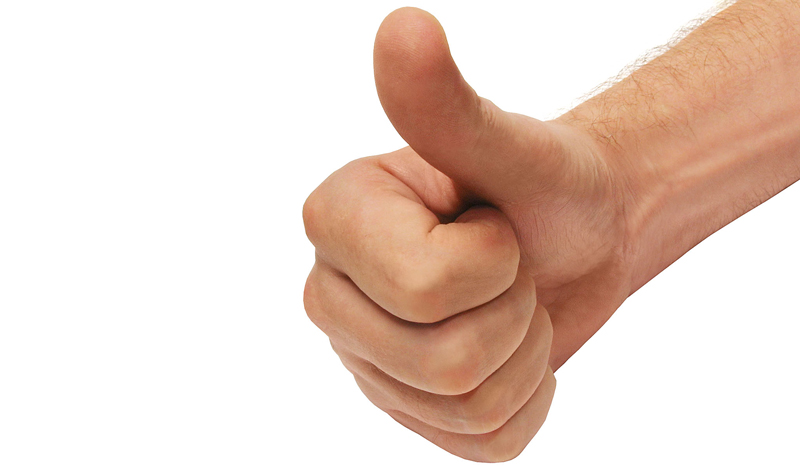 Oh, it’s you! Hello again! So you’ve come back for more fascinating Histories of Everyday Items? That’s great, because I just happen to have some for you. This week I give you the thumbs-up sign, the aquarium fish, and chewing gum. Enjoy!

It’s hard to tell where the “thumbs-up” came from originally, but it’s just about everywhere now. In most of the world, it means “good” or “well done”, though in Bangladesh and Thailand it’s more like the middle finger. In fact, in many Middle Eastern countries it’s rather like saying “Up yours, pal!”

First, we all know the popular (but not fully supported) idea that in Roman times, the gladiator looked to the crowd and if they were giving the thumbs-up, their victim lived and if they were giving the thumbs-down, bad luck. In medieval times, it was supposedly used to seal business deals (and, according to some, eventually came to mean the more general “Yo, totally, bro!” among knights). By World War 2, the military had seized it for pilots to sign to the crew that they were ready to go, and soon TV kids all over America were imitating them and now those kids are your parents.

However, the one that gets my two-thumbs-up is anthropologist Carleton Coon’s 1954 theory. When he observed apes giving each other the thumbs-up sign in Gibraltar, he—very naturally—assumed that they were engaging in “a mutual celebration of opposable thumbs”. Cool story, bro!

The Romans did some crazy stuff, including being the first to keep fish inside houses: traditionally, they kept sea barbels (a kind of carp) in small marble tanks under guest beds, presumably as a prank when they tried to use the bedpan in the night. But when that joke got old, the practice disappeared until in 14th-century China the emperor’s porcelain smiths decided to produce some large porcelain tubs for holding goldfish.

It wasn’t until the 1850s that it really took off. Dr. Ward, inventor of a glass cage often used for birds, thought it would be fun to keep toy fish in it; before long, someone realized that real ones would make better friends and the hobby of keeping fish-tanks skyrocketed in the U.K. Twenty years later, the Germans came up with the official name for it and began forming aquarist clubs and societies. What made it the standard office curio for dentists’ offices worldwide was the popularization of electricity, which made it much easier to aerate the water (without which fish somehow manage to suffocate).

Finally, in the 1950s, the plastic shipping bag was invented, and it became very easy to ship fish from one end of the ocean to the other so that people could finally “catch ’em all”. Nowadays the hobby of keeping fish, which is nearly as exciting as watching paint dry, is one of the most popular—it’s only behind stamp-collecting. No, seriously.

Hold on. What’ve you got in your mouth? Spit it out now, young man!

Almost every culture in the world has, at some point, had its children subjected to this kind of complaint from the schoolmarm. Yep, the Aztecs chewed chicle (you guessed it, Chiclets) and the Native Americans nibbled on hardened spruce tree sap, while the Greeks masticated the gum of the mastic tree (which, by the by, turns out to be a great way to lower your cholesterol). But the oldest is from 5,000 BC in Finland; birch bark tar—a fantastic antiseptic, according to our egghead friends at Wikipedia—was found with little tooth imprints in it. Not finished. I guess they, like our modern old wives’ tales, told their children not to swallow the gum or it wouldn’t leave their stomach for seven years?

Soon, the military heard of it and also appreciated it—since World War I they’ve issued it to all their soldiers to “improve concentration”. Just like it does in classrooms!