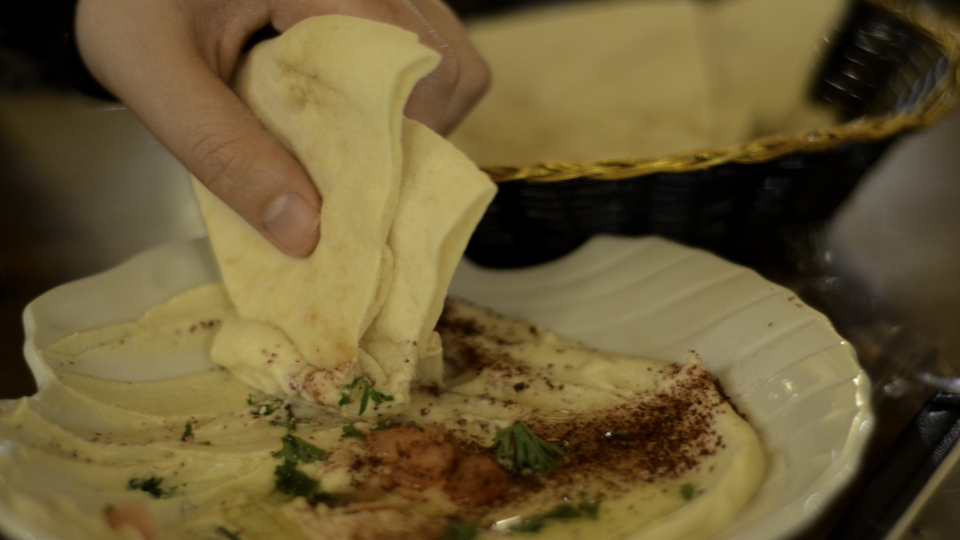 I talked about pho with friends, read about pho in food magazines, and watched specials about pho on television, but it wasn’t until recently that I realized I had never actually tried it. Eager to satisfy my curiosity about the Vietnamese classic, I headed to Pho Big Bowl.

I ordered chả giò (deep fried spring rolls) and a large phở tái chín (rice noodle soup with eye of round steak and brisket). Within minutes, the waiter brought me a spoon, a fork, chopsticks, and a pot of green tea. Then, just as I took my first sips of tea, the waiter brought me a small plate of bean sprouts topped with two branches of fresh basil, a small pepper, and a wedge of lime. The bean sprouts came with a small bowl of clear liquid with a few strands of carrot in it. Revealing my ignorance, I poured the bowl of liquid over the bean sprouts and began to eat them as a salad. (When I got to my computer later that night I realized my mistake: I should have added the bean sprouts, basil, pepper, and the squeeze of the lime to my pho.) My blunder worsened when I decided to take a bite of the pepper.

Thankfully my spring rolls and pho arrived before any further mishaps. They were delicious. The broth and noodles were sweet and delicate. The bright colours of the spring onion made the dish particularly attractive. The spring rolls were crispy, flaky, and not greasy. I jumped from plate to plate. My bean sprout “salad” became the perfect cooling side dish to the hot pho and spring rolls. The tea was an ideal contrast to the savoury flavours of the meal.

The whole meal came to only $11, and by the end of it, I was full. Very full. I am excited to return to the restaurant to try some other varieties of pho. Lined up for my next visit is their avocado milkshake.

Despite my “pho pas”, I am proud to declare that I ate my entire meal with chopsticks. I’m not a complete embarrassment after all. Right?

On Thursday night Junaid, Carine, and I sit down at a table in the middle of the restaurant. (The waiter tells us that we can’t sit at the couches unless we order more than $70 worth of food.)

The restaurant’s walls are decorated with random objects, including a model of an 18th century-looking ship, swords, urns, a guitar, and a sombrero. In the corners of the restaurant sit models of roosters and monkeys. Arabic pop music plays overhead and the TV mounted on the wall presents an Arabic news channel.

“The menu is just one page,” Junaid observes as I flip open the menu. “There. You’re at the end.”

I start to see why the restaurant didn’t get very good reviews. Still, about 15 other people are here, I see as I look around. I notice a bald man behind the bar staring at me.

“It’s because you’re the only Asian here,” says Junaid when I point out the man.We order grape-and-mint-flavoured shisha, kofta, lamb kebab, and beef shawarma.

“I don’t know why people assume Arabic food is spicy,” says Carine as the waiter lays the three dishes on our small table.

I haven’t really thought of whether or not it will be spicy. I take a bite of the kofta, presented as meatballs with sides of salad and fries. It’s not spicy. The meatballs are tasty and the fries are crunchy. I try Junaid and Carine’s dishes as well and like both of them. The shawarma tastes a little like a Greek gyro; the lamb kebab tastes like hamburger meat, which I happen to like.

The atmosphere is relaxed. The food is pretty decent for the price, which is $9 a dish. The shisha smells very fruity.

For dessert, we order baklava, which I’ve never tried before either.

“It’s wonderful!” I exclaim when I’ve tried the sweet pastry, which is so sugary it makes my Coke seem tasteless. It’s my favourite part of the meal. I don’t think I’ve ever before tried anything that’s this sugary—in a good way.

So now I’ve tried Arabic food. By the end of the night, I decide that I like it and wouldn’t mind trying it again, but I’ll go somewhere else where the bald man behind the counter can’t stare at me. Maybe I’ll travel to Egypt and try the authentic versions of what we had tonight.
Although Carine warns me that I’d still probably get stared at on the streets of Cairo.