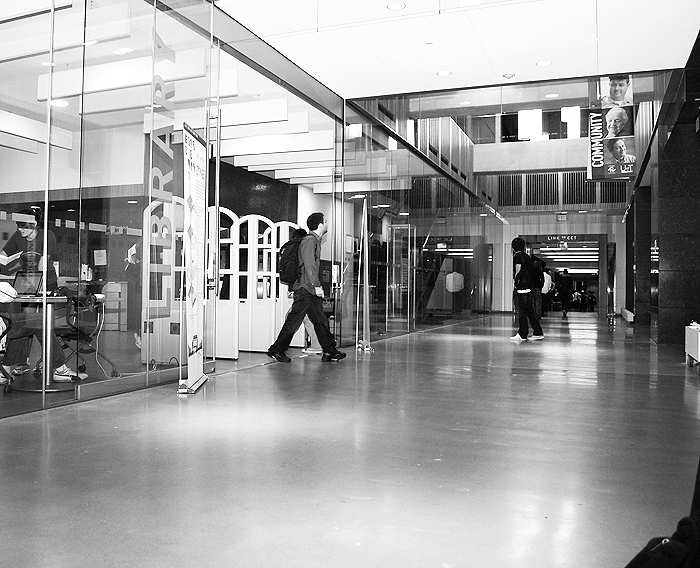 Approached from Outer Circle Road at night, it looks like a glowing crystal for- mation. Approached from the Student Centre during the day, it looks like a palace of glass, bracketed with wood and metal.
Having opened in 2006, the Hazel McCallion Academic Learning Centre (library for the rest of us) is one of UTMs most recent buildings. Its a far cry architecturally from the South Building, which could use the name the Fortress of Doom as much as it could the William Davis Building. And although the construction from the Atrium Project, initiated to reduce noise from the ground floor interfering with the third floors study rooms, greeted students at the beginning of the school year with noise, reduced traffic, and steel trusses, the construction is nearly complete.

The Atrium Project is the librarysThe construction of a new library was first brought up in the UTM Master Plan nearly a decade ago. This plan for development, arranged under Principal McNutt, stressed improve- ments for campus infrastructure. A new library was key to this, and in 2004, the groundbreaking took place.
Chief librarian Mary Ann Mavrinac described the move from the old library to the new one as a logistical thing of beauty. The library housed just under 400,000 volumes, which needed to be moved with minimal dis- ruption to users. The planning stages for the move took months and the actual execution involved over a month of movement, during which the library also tried to make their normal services available. When the library first opened in 2006, only the main and third floors were completed, but students still flocked to it.
Designed by architect Andrew Frontini, winner of the Canadian Architect Award of Excellence in 2000, the library is definitely sound. You wouldnt believe the steel run- ning through this building, said Mavrinac.
In 2008, the library, along with the RAWC and CCT Building, won an award of excellence in Mississaugas Urban Design Awards, and since opening in 2006 the building has achieved a Leader in Energy and Environment silver certification. The LEEDS rating system assesses build- ings based on five criteria of sustain- able design practises, including water efficiency and efficient energy usage.
UTMs library was the first building in the U of T campus system to receive the certification.
The library constantly undergoes architectural upgrades and improve- ments in student accessibility. Along with the Atrium Project, the library has also opened the Li Koon Chun Finance Learning facility in 2008.
As a building, the library is meant to be open and accessible. The staffs goal is emulate this attitude in their work with students. In the past year, the library staff formed an advisory group of students in an effort to increase the effectiveness of services. One concern of libraries has always been the preservation of information. The content is the same, but the con- versation is different, Mavrinac said. But now instead of worrying about acid content on paper, we have to worry about electronic files and how
were going to keep them. For students who use electronic archives more than print sources, this is an important conversation indeed, and one that, thanks to the Atrium Project, can now be carried on a little more quietly.