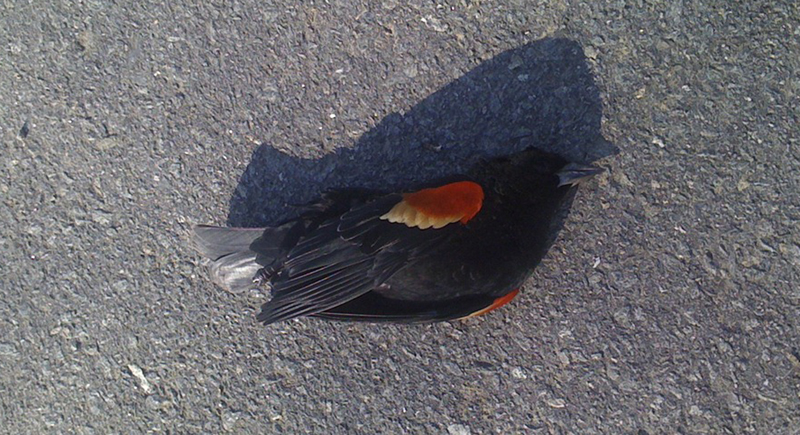 “It’s kind of a freak event,” said Greg Butcher, director of the National Audobon Society, a bird conservation organization. “You just don’t see these kinds of mass deaths very frequently at all.”

Not only did red-winged blackbirds, starlings, and grackles fall to the ground on New Year’s Eve in Arkansas, but another 450 were found dead around the same time in Louisiana. Scientists blamed New Year’s fireworks. They believe the loud noises in the sky sent the birds into flight, disoriented them, and sent them careening into power lines and each other.

The next day, tens of thousands of dead fish washed up along the shores of the Arkansas River just 100 miles from the site where the blackbird carcasses lay. Fish carcasses now number over 100,000. Over 95% of the fish were drum fish, leading scientists to believe the cause of death was a species-related disease.

While scientists reassured Arkansas that these events were coincidental, reports began flooding news stations of mass animal die-offs around the globe.

On January 5, residents of Faenza, Italy were greeted by thousands of turtle dove corpses lining the parks and streets. Residents say the birds “hung from trees like Christmas balls”.

Wildlife experts found blue stains on the birds’ beaks, hinting that the cause of death may have been poison or hypoxia. Hypoxia, a lack of oxygen, may have occurred if the birds were swept high into the sky by a sudden storm. Scientists now say the deaths were caused by massive indigestion.

In late December, dead penguins, petrels, and other seabirds washed up on the shores of New Zealand.

Nearly 500 were recorded along shorelines in Brazil. The cause of death was starvation, believed to be due to the environmental cycles of La Nina.

Recent record-breaking floods in Australia may be the reason for up to 7,000 dead fish of over 11 different species dying in the flooded regions. Flourishing microorganisms in the water are blamed for reducing water oxygen levels.

Enjoy tilapia? You may not be eating it for a while. In the last week of December, over 150 tons of tilapia died in 41 separate aquaculture farms in Vietnam. Low oxygen levels are blamed for these as well.

Brazil suffered a similar loss, though not on aquaculture farms. Over 100 tons of dead sardines and small catfish washed up on the shores of Paranagua, Brazil. Chesapeake Bay, Maryland, witnessed more dead fish, mostly juveniles.

Dawn Stoltzfuz, director of communications for the Maryland Department of Environment, expressed her concern. “We are seeing small/juvenile menhaden, croaker, [and] spot fish dead, in very large fish kills,” she said. “The numbers are estimated in the hundreds of the thousands at this point.”

Hundreds of dead starfish in Charleston, South Carolina. Thousands of gizzard shad fish in Chicago. Over 40,000 velvet crabs, lobsters, starfish, anemone, and sponges on United Kingdom beaches. Hundreds of shad fish in Sarnia, Ontario. All these events occurred between December and January. Scientists attribute their cause as cold weather.

The recent cold snap has enveloped nearly all of the United States with snow. Many sensitive aquatic creatures are used to feeding close to the shorelines in warm waters. But this year, these animals have received as big a shock about the weather as southern US residents. Often, these organisms cannot adapt fast enough to the sudden drop in temperature; they become stressed and die from freezing.

Fish deaths caused by low oxygen levels, such as the mass tilapia deaths, may be attributed to humans overstuffing their aquaculture farms with fish.

And the turtle doves in Fuenza, Italy? Zoo officials say the birds’ indigestion was caused by the doves gorging themselves on sunflower seeds from a nearby sunflower oil factory.

But are scientists sure? Or are they hiding something to keep the public from panicking? A few of these mass animal deaths left us without answers, such as the hundreds of dead snapper fish that floated to shore in New Zealand. The fish were fat and healthy.

Steve Wohlberg, a controversial Seventh-Day Adventist and author of multiple books on the end of the world, believes these mass animal deaths are no coincidence.

“Personally, I definitely do believe we’re in the End of Days,” Wohlberg told New York Daily News about the mass animal deaths, “and I believe there is a lot of evidence of that.”

Some Biblical quotations are being interpreted as eerie predictions about Judgment Day. One passage, Zephaniah 1:3, says, “I will sweep away the birds in the sky and the fish in the sea.”

Ideas range from an impending apocalypse (or, in the case of the dying birds, “aflockalypse”) to the BP oil spill and global warming, from secret governmental war experiments to magnetic polar shifts, from simple coincidences to the return of Jesus Christ.

Others write that it’s a media attention grabber. The bird deaths in Arkansas on New Year’s Eve earned media coverage. The fear of the unexplained grabbed people around the world, and reports flooded news stations in a matter of hours.

This, on top of the reawakened Mayan prediction of the end of the world in 2012 (recently made into the movie 2012, starring John Cusack), led people to report anything they noticed.

Biologists say that though these mass deaths are rare, they are

“I wouldn’t say it happens all the time,” said Carol Meteyer, veterinary pathologist for a division of the US Geological Service, about the recent bird deaths. “I’ve been here 20 years. You see them occur once in 10 years, but they happen.”