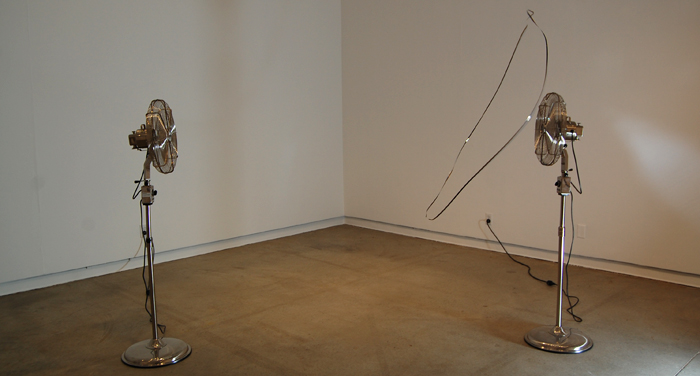 The ways in which we are bound to the Earth are constantly pushed to their limits.

The aerodynamics of flight, the weightlessness of space exploration, or even a simple jump from the ground allow us to experience a feeling of falling out – of detaching ourselves from what keeps us in place.

Last week, the Blackwood Gallery unveiled its 2009 exhibition entitled Fall Out, a collection of works by nine artists that reflect the phenomenon of gravity and defy and confirm its inevitable pull, as Gallery Curator Christof Migone explains. The exhibition stretches into the E-Gallery to showcase the realm of the individual, featuring works which highlight the processes and effects of breathing.

Paul Litherland’s video installations, entitled Forces of Attraction and Freefall Fighters, document his countless falls to the Earth as a skydiver, incorporating humorous elements such as the flapping of his cheeks and traditional boxing while falling through the air. Freefall Fighters marks the 30th anniversary of Litherland’s first jump at the age of 17.

Robyn Cumming’s dual exhibit features a large, canvassed photograph entitled “Many Shades of Pink, White Light, Undone, My Heart is Breaking” from her Little Legs series, as well as an untitled portrait from a second series called Oh, Mother.

Little Legs explores the artists interest in the relationship between humans and objects, as well as finding the intrigue and significance in ordinary situations. Oh, Mother encapsulates maternal existence in an idealized rendering so that her mistakes make her eventual fall from grace all the more profound and dejected. Cumming’s display will feature a new portrait from each series every week, simply laid atop the previous work to show a transition over the weeks.

A very delicate exhibit entitled “Delete” by Kristiina Lahde features a train of paper that has been repeatedly hole-punched to resemble the shape of the word “delete”, creating the effect of handcrafted lace in the process. The paper cascades over a stand and into a heap on the floor, comparable to the outflow of data from a computer.

The most eye-catching piece currently on display (as students waiting for class outside the gallery will attest) is Zilvinas Kempinas’ “O Between Fans,” an installation of two electric fans facing each other and creating an air flow, resulting in the mid-air suspension of a loop of video tape. The artist has meticulously placed the fans at a specific distance and angle from each other, in order to generate the precise condition in which the tape can flitter in the air for hours.

Tom Sherman’s “Hyperventilation piece” is interesting as it introduces the viewer to the work’s premise through a statement on the gallery wall, but the actual video it describes will be on display at Hart House for Nuit Blanche 2009, as part of the Drop Out exhibition. Sherman’s textual work explains his desire to work with video equipment, while his video depicts him hyperventilating to the point of passing out and falling out of the video frame in which he was being recorded. The video will feature a re-performance of Sherman’s experiment, Sherman having lost the original upon moving to Toronto.

Don Simmons’ “Bachelor Forever” is an interactive piece that uses a magnetic strip to move iron fillings up and down the wall, leaving a line of residue behind. The magnetic apparatus draws inspiration from Marcel Duchamp’s glass panel creation, “The Bride Stripped Bare by Her Bachelors, Even” and invites the viewer to observe its workings behind the wall through a space that has been left open.

The final piece on display in the Blackwood is Valerian Maly’s “Apple (Windfall/Fallobst),” an audio installation located by the gallery entrance, which audibly recreates the falling of an apple from Isaac Newton’s Apple Tree in Lincolnshire, England. Maly recorded the sound of apples falling until he achieved the perfect synergy between the static tree and the dynamic falling fruit. The 12-second clip has different lengths of silence embedded between each repetition, to more closely mimic the occurrence of falling fruit.

The first of the two works in the E-Gallery is “Breathe” by Erika Kierulf, a silent video triptych of people walking, breathing, and then slowly falling down and out of the camera’s view. The work becomes repetitive, but still remains interesting as each person has a different portrayal of letting go before the fall. The final work in Fall Out is a two-part exhibit called “Perfect Vehicle” by Simone Jones. The video shows a vehicle being propelled through the Salt Flats of Utah by the drivers breathing and the movement of his ribcage, while the actual machine is on display in front of the gallery as a means of enticing onlookers to enter the space and experience the story that is attached to it.

The nine works in Fall Out will each be countered by a piece in Fall In, a second exhibition by nine new artists. In October, the new works will be displayed alongside the works they are responding to, allowing the viewer to compare each visual relationship that unfolds.
The Blackwood Gallery is located in the Kaneff Building and is open Monday through Friday from11a.m. – 5p.m. as well as on Sundays from 1p.m. – 4 p.m.; the E-Gallery is located in the CCIT building across from the MiST Theatre.