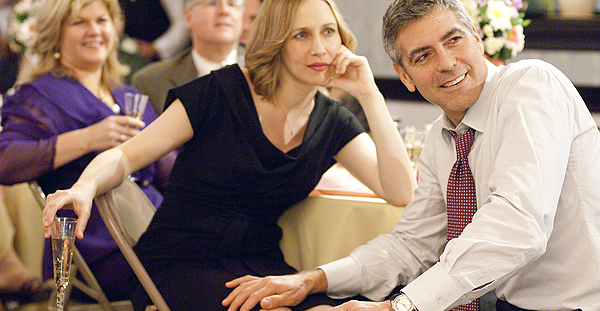 With two acclaimed films to his name, director Jason Reitman (Juno, Thank You for Smoking) takes a timely look at the current economic troubles in his third full-length feature, Up in the Air. Thanks to star George Clooney and increased exposure from the success of Juno, Up in the Air is one of this seasons biggest Oscar contenders, and for good reason.

Ryan Bingham (Clooney) is a middle-aged man with few emotional ties and a penchant for frequent flier miles. Hes totally satisfied with his job as a travelling career transition counsellor. In other words, hell fire your employees for you.

But when a young upstart at his company, Natalie (Anna Kendrick), introduces a video chat system that would allow anyone to terminate unsuspecting employees across the country without ever setting foot out of the office, Ryan is forced to defend his lifestyle. With some prompting from his boss (Jason Bateman), Ryan takes Natalie on a trip across the country to show her the benefits of in-person dismissal. Along the way, he meets his status-obsessed match in Alex (Vera Farmiga), a career woman who seems to seek the same lack of commitment that Ryan does.

It would be easy for the audience to dislike a character as detached from the rest of the world as Ryan Bingham. But Clooney does a great job of humanizing Ryan. He doesnt have many people in his life to share his inner thoughts with, but Clooneys facial expressions and reactions tell us so much about his character.

With films like Oceans Eleven and The Men Who Stare at Goats, Clooney has proven that he can crank out one smooth-talking performance after another, and while his quips and smirks are in no short supply here, there are also glimpses of vulnerability in this performance that make it one of his best yet.

Kendrick, who was perhaps previously best-known for her small role in the Twilight movie series, is also fantastic here. Shes completely believable as an intelligent, ambitious young woman and has a very inviting screen presence. Her character goes through a range of emotions throughout the film, and Kendrick is equally good in the comedic and dramatic scenes.

Farmiga gives a very intriguing performance as Ryans would-be girlfriend, and she and Clooney have an easy, charming on-screen chemistry.

While Alex could have been the bland love interest supporting character that we see in so many movies, the films writing and Farmigas performance make sure that shes every bit as vibrant as the lead.

The most interesting part of Up in the Air is its characters, particularly Ryan. Its hard to get on board with his love of the impersonal touches of elite flying status, and we shake our heads when he encourages the audience of his self-help seminar to cut all emotional ties. But watching him be brought back down to earth thanks to his growing relationship with Alex and his sisters impending wedding feels like a natural development of his character. And by the time the film takes some unexpected turns in the final act, its hard not to feel empathy for Ryan.

As well as giving us a careful examination of the lives of its three characters, Up in the Air also has a lot to say about more universal issues. It deals with the current economic downturn and discusses isolation in a very serious way. There are plenty of comedic moments in Up in the Air and its humour has bite, but Reitmans not afraid to explore darker themes along the way. This has great results, because some of the later parts of the film are unexpectedly moving.

Another thing that Up in the Air has going for it is a great soundtrack featuring the likes of Elliott Smith. Like all good soundtracks, it never distracts from the film. The songs feel like the perfect accompaniment to a few well-placed montages throughout.

Up in the Air is a meticulously constructed, slick film, but its also Reitmans most mature and well-rounded. Not everyone will like its slower pace and decidedly more serious tone, but Up in the Air is certainly a film well worth seeing for its trio of great performances and its relevance to our times.