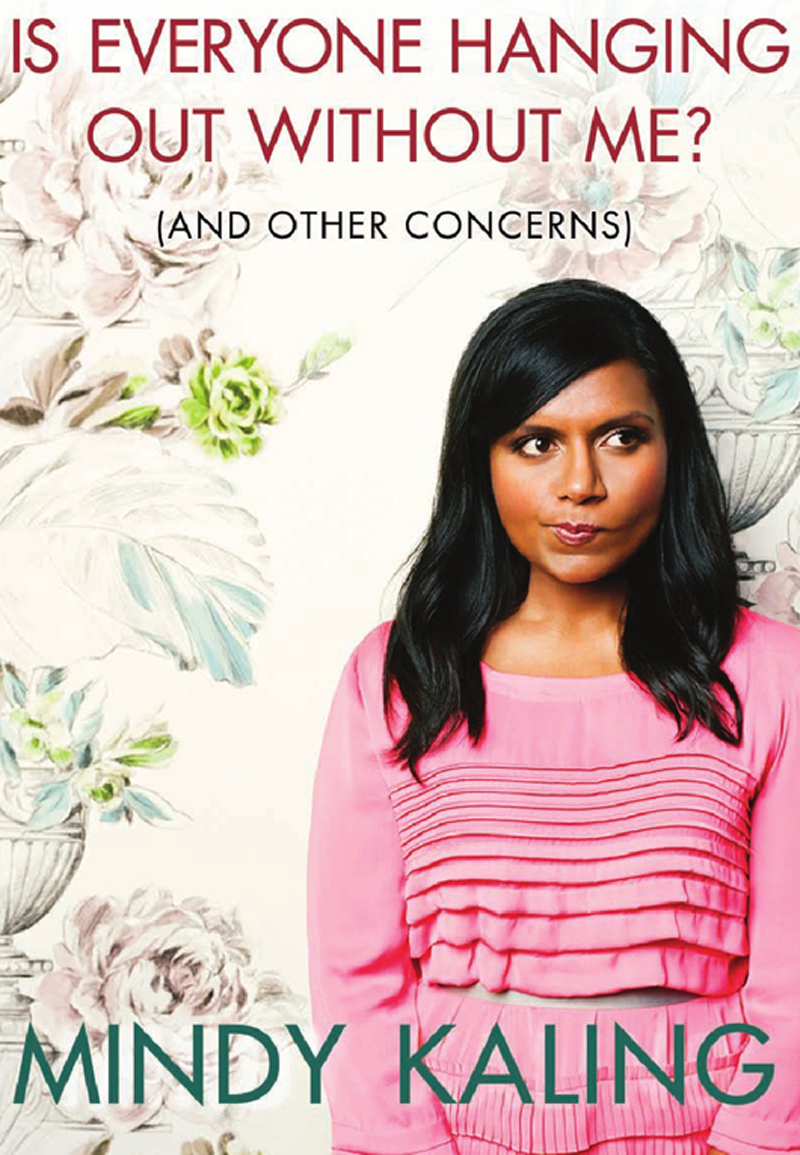 If you’re one of Mindy Kaling’s 1.5 million Twitter followers, then you’re already familiar with her bubbly, self-deprecating, pop culture-obsessed persona. And there’s a good chance that you want her to be your best friend. If you don’t follow Kaling and don’t know who she is, I’ll fill you in. The writer/actress is best known for playing the vain and possessive Kelly Kapoor on NBC’s The Office, and she’s also a writer and producer for the show. But if her first book, Is Everyone Hanging Out Without Me? (And Other Concerns), proves one thing, it’s that Kaling is not like her television character… that much.

Constructed as a series of essays, lists, and anecdotes, Is Everyone Hanging Out Without Me? certainly doesn’t reinvent the genre of comic qausi-memoirs. Tina Fey, David Cross, Mike Birbiglia, and many others have tried their hand at the literary world with similar results. Everything you’d expect Kaling to cover, she does. Her awkward childhood and teen years, her quirky family, and her rise to success all get ample coverage in the book.

However, you don’t have to reinvent the wheel to write an entertaining book. One of the most important parts of the equation is having a distinct voice, and that’s one thing Kaling definitely has. She’s just as clever and sassy as you’d expect from her Twitter feed and her The Office persona, but she’s also very relatable. When she talks about the sadness that comes with growing apart from adolescent friends and the joy that comes with finding new, more compatible friends later in youth, there’s no punchline—and there doesn’t need to be. She’s just using her own experiences to talk about things that everyone can relate to.

This down-to-earth approach is sustained throughout the book, especially in the first third or so, where Kaling recounts her adolescence and the early years of her career. Her stories of growing up aren’t especially bizarre, unusual, or even hilarious. But they’re really enjoyable to read because of Kaling’s knack for storytelling. When she talks about how awesome her best friend Bren is, you start to think Bren is pretty awesome, too, despite knowing almost nothing about her. You root for the ill-equipped post-grad Kaling to make it big in New York City, even as she bombs a string of auditions and interviews. This first part of the book is kind of like a quality romantic comedy film (a genre that Kaling semi-ashamedly admits to loving)—it’s easy to point out that there’s nothing groundbreaking on display, but it’s also hard not to get wrapped up in the characters and their stories, as familiar as they may feel.

The third major section of the book, titled “Hollywood: My Good Friend Who Is Also a Little Embarrassing”, feels different from anything up to that point. In this section, Kaling discusses how she got hired on The Office, and what her time on the show has been like. It’s equally interesting, but for entirely different reasons than the earlier parts of the book. The inside look into how television shows are made is fascinating, especially for fans of The Office. Those looking for tell-all secrets from the set will be  disappointed, but Kaling does entertainingly lay out some of the process of writing an episode of The Office.

However, one downside to Is Everyone Hanging Out Without Me? is that it’s chock-full of pop culture references. That isn’t inherently negative, but it does bring into question how the book will age. Will the Pippa Middleton or The Real Housewives references mean anything to readers 10 or even five years from now? The book reads like a long, well-written blog post at times, which is fun, but it also gives it a somewhat gimmicky, soon-to-be-dated quality.

Questions of timelessness aside, though, this is a hugely entertaining book. Kaling writes in a breezy, readable style, and she offers up several laugh-out-loud moments throughout. It’s a quick read (as Kaling writes in the introduction: “If you’re reading this book every night for months, something is not right”), and fans of The Office and Mindy Kaling will  probably find a lot to like. Kaling might be different from her character, Kelly, in some key ways (which she helpfully lays out at the midpoint of the book), but she proves here that she can be just as funny and captivating.