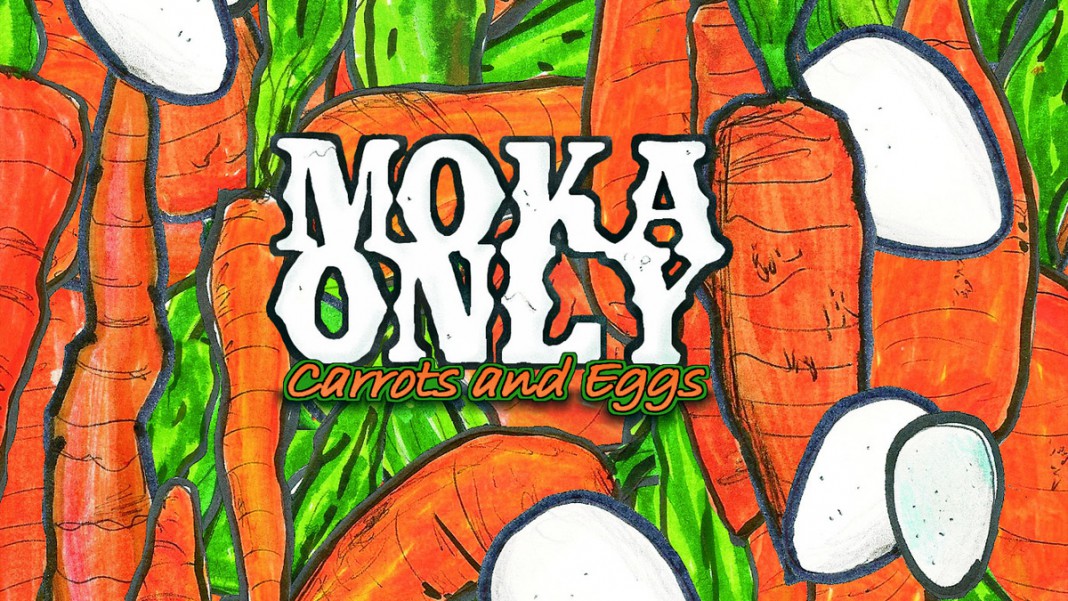 “Hi persons. Moka, back in this yet again,” begin the liner notes to Moka Only’s Carrots and Eggs. “Thanks for investing your food, drug, beer, diaper, toilet paper, or weed money into this excursion.”

The cover is done in a tasteful carroty shade. I’m intrigued. A glimpse at the Canadian rapper’s Wikipedia page reveals a discography of over 70 albums and EPs since 1995, and he was a part of the Juno-winning group Swollen Members. So what’s the record like?

The opening track, “Carrottro”, puzzles. The contributors stress several times that this is indeed an album about carrots and eggs. “I’m here to, um, explain to you the way that this album works. I will be taking you on the journey that is carrots and eggs,” says guest artist PSY. Meanwhile, Moka lets us know that it’s “2008 and hip-hop is back”, and claims that he’s “the most exciting thing since the library”.

While the rapping performance is not that bad, the album is, sadly, mostly tired beats, atmospheric backing, and ludicrous lyrics. “I’m hot, and you’re not,” raps Moka, “but if you wanna hang with me, I’ll give it one shot. Top that!”

That said, there are no fewer than 23 tracks on this 60-minute album, and it’s hard to record that much music and not hit some high points. The lyrics, hook, and mix in “Hardly Say” are all effective. The rapping in “Colours Don’t Run” shows some sophistication. “Starfish” has a good vibe. The last 40 seconds of “Tit 4 a Tat” I might listen to again.

What makes the album really farcical is the recurring theme. Among the many songs that reference it, my favourite is a skit that concludes, “Yeah, those are some eggs. But that isn’t the number of eggs that I wanted.” In the end, there’s so much that’s bizarre about the album that I recommend you pick it up solely as a curiosity. Let the surprisingly informative liner notes be your guide.