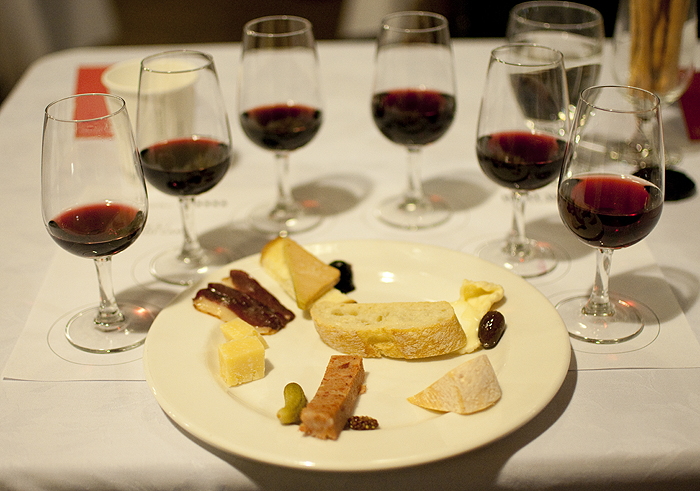 It’s Thursday evening and I’m in the cramped Music Room of Hart House where I had come to write about a pinot noir tasting event. The Medium‘s photo editor, Matthew Filipowich, leans toward me and asks, “You sure this article should go in Arts? It’s more of a Features piece.”

That makes sense, but as winemaker Norman Hardie will prove to us during the evening, winemaking in general, and Pinot Noir winemaking in particular, is really an art form.

We sit with some 60 wine aficionados at long tables table, each with five wineglasses and trays of cheeses and breadsticks in front of us, to learn about pinot noir. Pinot noir gained popularity in North America after the movie Sideways came out.

If wine is elusive, pinot noir is superlatively elusive. Sensitive to light and soil types, highly reflective of its terroir and susceptible to bunch rot, downy mildew and leaf roll, pinot noir grapes are so difficult to grow that they prompted Andre Tchelistcheff to proclaim, “God made Cabernet Sauvignon, whereas the devil made pinot noir.” He should know, not just because he’s  been dead for the last 15 years, but because he’s also considered one of America’s most influential winemakers.

The difficulty in growing the pinot noir grape translates into a similar difficulty while tasting the wine. It has a tremendously broad range of bouquets, flavours and impressions, often confusing tasters and prompting Master Sommelier Madeline Triffon to call it “sex in a glass.” Maybe that helps to explain why, like Hardie says, “It’s over once you are bitten by pinot noir. You’re  hooked.”

To guide the audience through pinot noir’s range, Hardie offered five samples from five different countries, ranging from a French 2005 Nicolas Potel Vielles Vignes Morey-Saint-Denis, to a Santa Barbara 2007 Au Bon Climat Pinot Noir, and ending with his own 2007 Cuvee L Pinot Noir, which earned a rating of 91 in Tony Aspler’s newsletter.

The event is the second in the 2009 Hart House Tasting Series. In addition to Hardie, the event features Afrim Pristine of the Cheese Boutique. Pristine brings, among other treats, duck rillettes and duck prosciutto, clochette cheese (of Ratatouille fame) and a Thunder Oak gouda cheese that Toronto Life once listed as number three in a list of a hundred things to try before you die. I’m glad I now have only 99 left.

I’m also glad I have Norman Hardie to guide us through the wine sampling. Hardie loves what he does. He’s not loud or boastful about it. Neither is he a snob— tonight he wears jeans, a chambray shirt with rolled-up sleeves, and a black, long-sleeved undershirt. “I spend a lot of time in refrigerated rooms,” Hardie explains.

He’s tall and heavy and imposing, a man in his early mid-forties with a slight Afrikaans accent that he must have worked hard not to lose in all his years in Canada. His clean-shaven broad face glows red, and for a moment I picture gallons of wine drunk over the course of a lifetime. But then I notice his thick forearms, red as his face, and I see years spent in the field and under the sun. His hands move about with surgical precision, like a watchmaker’s, or perhaps like someone who was a mime at some point. They touch invisible grapes as he muses on pinot, they pinch imaginary dirt as he describes the clay-and-limestone-rich soils of his winery, and they caress coastlines as he describes the region of Galpin Peak in South Africa, an unexpectedly cool area where pinot noir grapes grow surrounded by a white shark-infested ocean.

Before Hardie became a winemaker, he worked as the head Sommelier and then general manager at Truffles at the Toronto Four Seasons hotel. He left in the 1990s, returning to his country of birth, South Africa, to learn the ropes of winemaking. He studied wine formally at the University of Dijon, then apprenticed in Burgundy, where the best pinot noir wines come from. He continued his education in New Zealand, then in California, before returning to Canada.

By the time he came back, Prince Edward County was just becoming a wine centre. Convinced that the region’s cool climate and its soil were a perfect match for the pinot noir grape, Hardie opened the Norman Hardie Winery and Vineyard in 2005. His wines are now carried by some of the best restaurants in Toronto. According to Malcolm Jolley, editor of the Good Food Revelation website, all of the two to three thousand cases of wine that Hardie produces yearly never fail to sell out.

It’s easy to see why. Every time Pristine addresses the audience, Hardie just stands by his side, swirling wine in a glass before he sips it and lets it flood his mouth, looking pensive, as if he just found something new in the wine. And at the end of the event, as I sit there, surrounded by empty wine glasses, sipping the last of my 2007 Norman Hardie Cuvee L, which Hardie sells for $69 in his winery, I too find a new flavour in the wine, one that I hadn’t noticed in the previous sip. And so I wait, frowning, and swirl it again, and sip it one more time. And indeed there it is—a new flavour, a new texture almost, that hadn’t been there before.