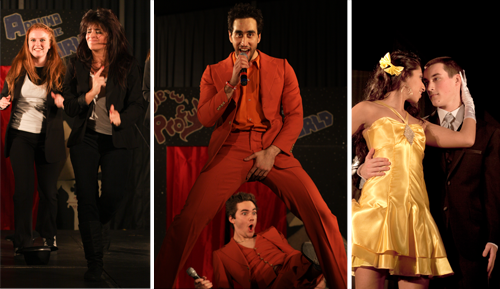 In accordance with this year’s “Around the World” theme, the much-hyped event featured fashion and music from 17 different cities. UTM students Norris Yacoub and Camilo Diez hosted the show for the second time, which began with fashions from Milan and ended with a Michael Jackson tribute.

“I feel [Around the World] is a great theme as it is very representative of the multicultural school and of the GTA,” said Cheyenne Thannikkotu, president of Style and Profyle. To fit the theme, models and dancers performed dances and wore clothing from cities such as Paris, Tokyo, Greece, Arabia, Cuba and India, to name a few.

Thannikkotu, along with Sheena Campbell and Matt Di Paola, led this year’s cast of approximately 80 students to perform a smooth and entertaining show.

The audience picked Diez as the most “Gaga for Lady Gaga” after a Diez challenged his co-emcee to dance off, complete with blonde wigs and Lady Gaga-inspired costumes. The second act of the night was inspired by Los Angeles. It was choreographed by Alyssa Seli, featuring music from Lady Gaga’s “Bad Romance.” Seli’s scene stood out as one of the most energized performances of the night.

“I made up the choreography for that song right away; it was the first one I did because as soon as I heard that song, I knew exactly how I was going to dance,” said Seli.

Other scenes that stood out included the traditional belly dancing scene, which pumped up the audience after intermission. The romantic scene from “Paris, the City of Love” featured music from the movie Nine, choreographed by Diana Pandya. The audience also appreciated the Latin scene from Cuba, which featured last year’s organizers Michael Ross and Daniella Fragomeni along with this year’s organizers, Thannikkotu, Di Paola and Campbell.

The show ended with a tribute to Michael Jackson, which was choreographed by Joanita Idicula. The scene touched many of the cast members and dancers and included songs “Bad,” “Thriller” and “Smooth Criminal.”

“Being a Michael Jackson fan, that scene meant a lot of me. It was a great way to pay homage to the greatest entertainer of all time,” said fourth-year student Myron Zhao.

All of the proceeds from the Fashion and Dance show will be donated to the UTM Student Refugee Program, which assists student refugees to become Canadian permanent residents and offers them a chance to study at UTM.