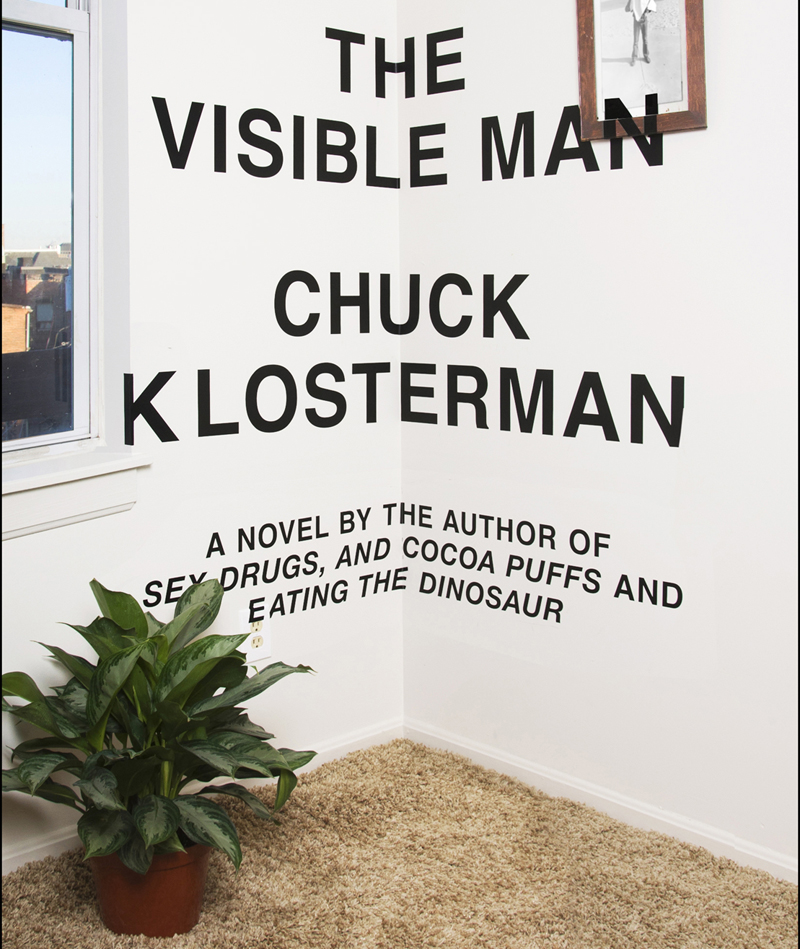 Chuck Klosterman is a writer who’s made a living on his observant and often self-centred memoirs, journalistic pieces, and essays. It all started with 2001’s Fargo Rock City, which was part memoir (based on Klosterman’s experiences growing up in small-town North Dakota) and part heavy metal history lesson. From there, he became a writer and editor for Spin magazine and he’s since published four more works of non-fiction. And for a writer who’s so focussed on the now of popular culture, fiction might not seem like a natural fit.

But in 2008, Klosterman released his first novel, Downtown Owl. And though the three intertwining narratives in the novel are fictional, it’s easy to spot the influence from Klosterman’s own life. Most notably, the novel is set in small-town North Dakota in the mid-1980s (the time of Klosterman’s youth), and popular culture references permeate the whole novel.

However, Klosterman’s recent second novel, The Visible Man, is something of a departure. The novel is set in present-day Texas, and it tells the story of a therapist, Vicky, and an especially strange client who she encounters. The Visible Man poses as the draft for a book that Vicky is writing about her client, who she refers to only as “Y____”. Y____ comes to Vicky under initially conventional circumstances, but he proves to be an uncooperative patient. However, his strange behaviour is soon explained when he reveals to Vicky that he has created a skin-tight suit that allows him to become nearly invisible to everyone around him. And not only has he created this suit, he uses it to break into the homes of unwitting singletons to observe their behaviour.

If this sounds like a creepy premise for a book, that’s probably because it is… sort of. Y____ claims that he doesn’t spy on people for cheap thrills, but merely to see how others behave when they think they are truly alone.

Y____ discovers some pretty interesting things in the process, which he relays to Vicky in their therapy sessions.

Klosterman depicts the lives of the lonely people that Y____ encounters in such detail and with such honesty that it’s impossible not to get invested in their lives, even just for the short time that Y____ observes them. Klosterman has always been good at pinpointing what makes people tick, and here he offers up some of the most profound, funny, and oddly moving observations on human behaviour of his career.

Klosterman is not a flowery prose writer, yet he comes up with many elegantly crafted sentences in The Visible Man. He’s also known for often expressing his ideas in purposefully twisty, contradictory ways—a manner that annoys some critics—but he keeps the stylized writing techniques at a minimum here and leaves the syntax refreshingly uncluttered.

While it’s packed with interesting ideas, The Visible Man is a novel that takes a while to get going. Klosterman spends a lot of time recounting the unfruitful early therapy sessions between Vicky and Y____. And because Vicky is the narrator of the story, the reader is subjected to several tedious passages of her pondering whether or not Y____ is telling the truth about his ability to become invisible. In real life, a person would obviously have enormous doubts about Y____’s claims, so it’s admirable that Klosterman is going for realism, even with such a ludicrous premise. But from an entertainment perspective, the reader knows that Y____ using the suit and observing people will become the crux of the novel, and all of Vicky’s initial fretting just feels like a hurdle to get to the “real” story.

Although there is no conventional plot for the majority of the novel, Klosterman adds a strange narrative shift in the last third of the book. Without giving too much away, Y____’s ability begins to cause problems for several characters. Of course, when the writer introduces a character who can turn invisible, certain issues are going to come up with that, but the way that the last act unfolds feels out of place in an otherwise meditative story. Some of the interesting ideas about loneliness that Klosterman explored earlier on fall by the wayside. This by no means ruins the book, and it’s not a horrible ending; it just feels a little strange.

Even if it isn’t entirely successful, The Visible Man is a fascinating and engrossing read. Though some readers may be put off by its faux non-fiction format or the farfetched premise, Klosterman makes his insightful observations easy to grasp. His narrative is layered enough to provoke some serious thought, but it’s not so deeply philosophical as to put off the average reader.

Anyone who enjoys Klosterman’s previous work should add The Visible Man to their reading list, and fans of writers such as Miranda July and Dave Eggers will probably also find a lot to like. It won’t be for everyone, but those who are willing to try something different are in for a fascinating, if occasionally frustrating, treat.