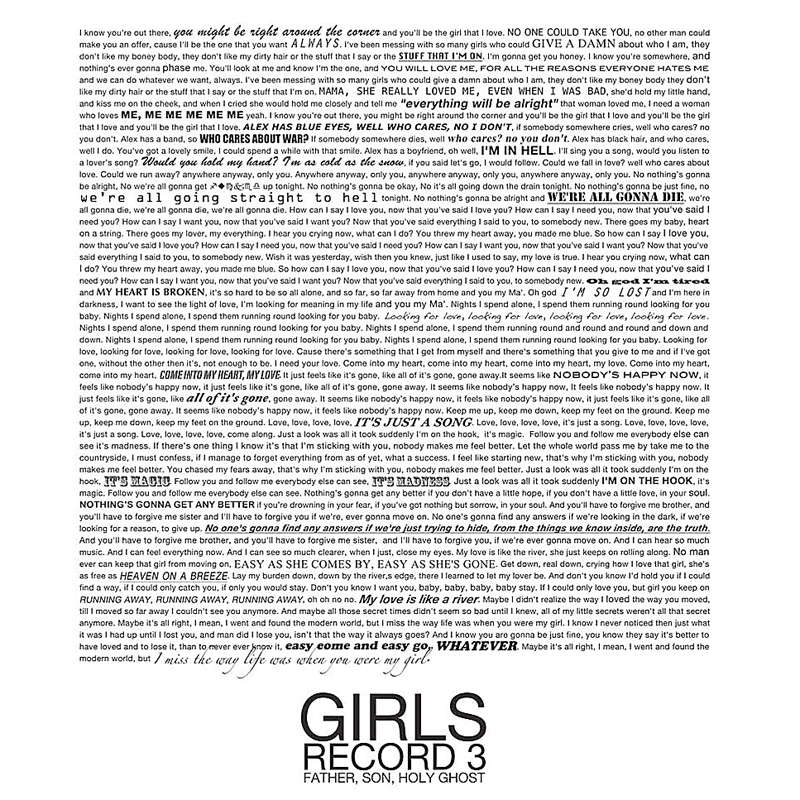 San Francisco-based indie band Girls return with their sophomore effort, Father, Son, Holy Ghost, and while the first track, “Honey Bunny,” mimics—if only for a second—the opening sound of The Cranberries’ 1993 song “Dreams,” the album soon transforms into the familiar surf-rock sound we’ve grown to expect from the band. Owens’ distinct voice keeps the guitars in check as he moves through the song with razor precision, each verse more catchy than the one before it, until the song eventually explodes into a ridiculously catchy chorus as Owens whines about the girls that don’t like his “bony body” and “dirty hair.”

As in the opening track, the song barely hits the two-minute mark, and it’s a moment of great pop craftsmanship that hardly appears again on the rest of the album. That’s not to say that the album isn’t good, but the duo worked hard to avoid repeating the same formula more than once. “Alex,” the second track on the album, hits high on the tragedy meter as guitars wail and Owens’ voice barely registers higher than a whisper on the track. “Die,” a definite yet strange standout from the album, best represents the genre-hopping that is Father. While “Alex” has moments of guitar screeches, “Die” takes that screech and extends it for the entire five-minute duration of the song, beginning with a great (if not uncharacteristic) guitar solo. In fact, any fear that Girls would get too comfortable with their sound is dismissed in several of the album’s better moments. “Vomit” begins with a single guitar strumming, and while lyrically it stands on the same platform that “Hellhole
Ratrace” may have stood on
their debut, Album, it rises and falls with triumphant peaks in ways “Hellhole” never did. The album ends with “Jamie Marie,” a country-tinged ballad with a bare guitar
resonating through the track and Owens’ barer vocals lingering through the piece with an expected heartbroken tone—a suitable ending to an album that falls between the
familiar and the unforeseen.

With Father, Son, Holy Ghost, Girls make an album that isn’t predictable or expected, but still appears as something that has formed organically from the existing sound of the band. It is a album that works on a pair of headphones but comes to life on a set of speakers—so listen alone or with one, two, or even three friends, if the title inspires you. MMM½