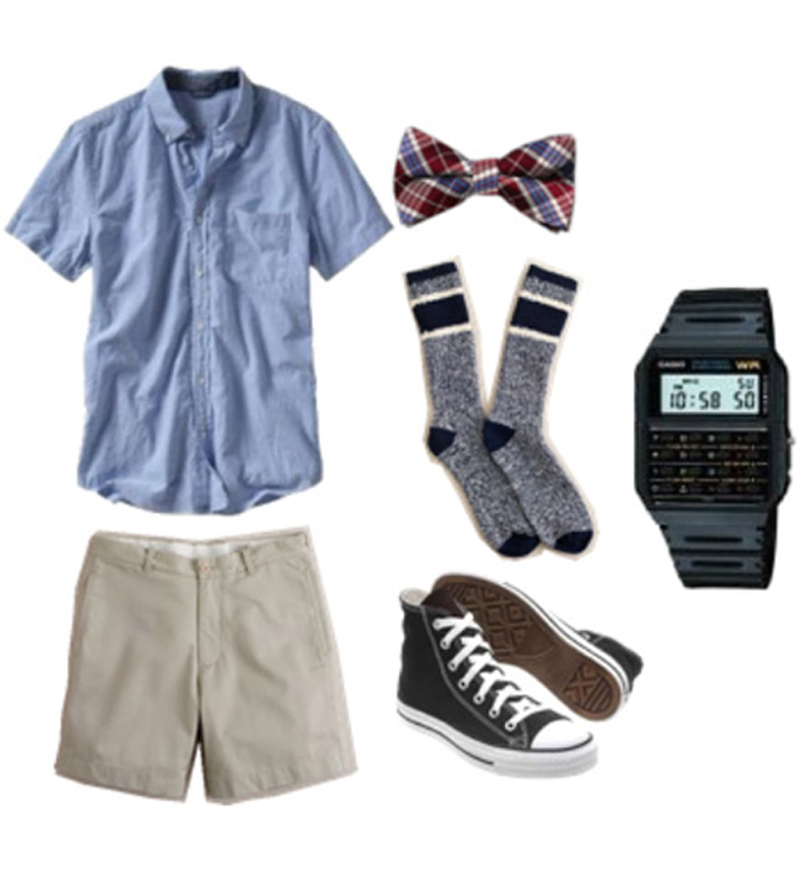 If you’ve ever owned a pocket protector, uttered the words “may the force be with you”, or wanted to “catch ’em all”, you, my friend, are a geek.

Please, don’t be offended by this affirmation. Many geekazoids were persecuted in their youth, but their affinity for all things Harry Potter and their propensity for glasses and Greek mythology has finally paid off. Geeks, now is your moment! Thanks to companies such as Apple, werewolves like Jacob, and bowties being available in many stores, geek culture is officially mainstream. From blogging and Skyping, to Netflix-ing and Farmville-ing, geek lingo is deeply embedded in our culture. Finally, swirlies are ancient history and “geekdom” is a cultural phenomenon that begs to be emulated.

Fashion is certainly not excluded from this momentous flourishing of the geek. Open your eyes and you are bound to see someone rocking a classically geeky fashion item. Everyone from Kanye West to LeBron James has been spotted rocking geeky clothing!

So today, I encourage you to step out of your comfort zones and appreciate your inner geek. Take a look at the following outfits, watch an episode or two of Star Trek, and pass these tips along to the guy you play with on Xbox Live.

Outfit 1: More math for you and me!

No, I’m not kidding; I am advocating the purchase of a calculator watch. No, you shouldn’t stop reading… Seriously, this outfit is what geek chic is all about!

Pause for a second and strip away all of the geeky items by covering up the right side of this outfit. Now, what do you see? A classic prepster. Someone that doesn’t stand out. Yo might say, a coward of the fashion world…

Now add back all of the geek swag in question—watch, socks, Converse, and bowtie—the whole nine yards. Now what do you see? The guy that got beat up in grade 3? Probably, but that’s not a bad thing. Geek chic is all about putting a new spin on the clothes from your glory days.

And how do you do that? By acknowledging that accessorizing is a two-way street. Quite simply, guys should man-cessorize just as much as women accessorize, and it is not a bad thing. In the outfit above, a pretty bland combination is made a lot more interesting with the addition of some simple items—high-top Converse, a casual classic; striped socks, a geek must; and a calculator watch, one of the greatest inventions of all time. Think what you will of accessorizing, you have to admit, it makes this outfit pop.

One more tip: skip the bowtie unless you are truly ready to commit to the geek lifestyle. It’s for advanced users only.

I love the old-school intellectual vibe that suspenders suggest. Blame it on Bay Street, but when I see someone rocking them, I just immediately think geek. Obviously, though, suspenders aren’t your run-of-the-mill item. Though they have been picking up popularity recently (according to GQ), spotting them on the street is still a rare occurrence. So, to get yourself in the mindset required to make these work, I suggest thinking outside the box.

What is geekier than thinking outside the box? Your iPod, your cellphone, and your laptop all started as radical thoughts. So embrace the off-beat and go crazy… You might just be, or at least look like, the next Steve Jobs or Mark Zuckerberg.

Outfit 3: Rules were made to be broken.

This outfit is a far cry from what I would usually suggest, which reveals that rules were made to be broken. Everything about the outfit above is a bit off the beaten path. Ironic glasses and graphic tee combo. A cardigan with a hood. All of the items above are a bit strange, with the exception of the Converse, which bring it all back down to earth.

At the end of the day, being a geek is the epitome of individuality. For geeks—or anyone, for that matter—there’s nothing wrong with being different! So go out, rock some geek swag, and show the world who’s boss!