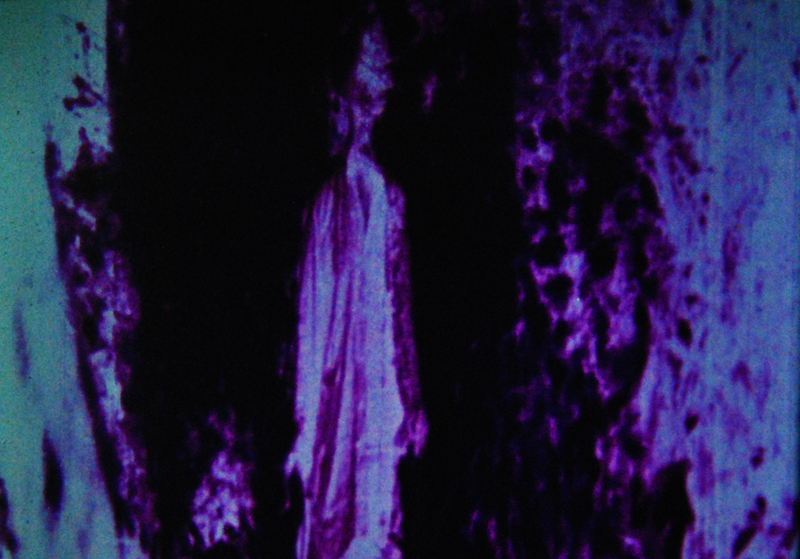 The Blackwood Gallery is always looking for new ways to transform the gallery space, and its  latest exhibition, Lost Secrets of the Royal—curated by Ben Donoghue and Heather Keung—is no exception to this tradition. Gone are the enormous canvases and  delicate installation pieces of the 40th anniversary Viva Voce  showcase: the viewer is immediately confronted with a black curtain cascading down from the ceiling. As you leave behind the comfort of the brightly lit gallery entrance and grasp your way through the barrier into the darkness beyond, your senses are immediately thrust into disarray.

On the opposite wall hangs a large video display onto which two film projectors juxtapose flickering film fragments from a 1970s kung fu movie. Daïchi Saïto’s Never a Foot Too Far, Even bombards your  retinas with multi-coloured refractions that simulate the cracking of a film reel—indeed, it has suffered decay—but the truly haunting aspect of the experimental film clip is the stationary silhouette of an extraterrestrial figure. From time to time, the figure appears to lift a hand and step to the right, but because of the onslaught of piercing colours and formless  contours, the viewer is forced to question if these movements are merely a figment of the imagination. The longer one stares at the screen, the more of a  hallucinatory quality it conveys, and after a while it becomes difficult to escape its hypnotizing effects. In combination with Malcolm Goldstein’s equally eerie audio installation—a screeching mélange of out-of-tune violins—the experience soon becomes quite unsettling, although it never loses its intrigue. Despite the video installation’s entrancing  effects, it comes as a huge relief once you cross the threshold of the curtain once more into a safe haven that is contrasted with the addictive dream-like realm you just left.

The eGallery in the CCT Building offers a more interactive and inviting atmosphere with Cindy Mochizuki’s Yokai & Other Spirits. When you enter the  long room, it is unclear what you’re supposed to make of the old-school telephone that sits in the centre of the room, or the projector nestled in the back wall, as it does not seem to be projecting anything at all.  After a minute or so, the telephone rings. One feels uncertain, but curiosity ultimately prevails. As you hold the receiver to your ear, there is silence at first, but within moments, a voice whispers,  “Hello?” There is a momentary feeling of terror that there is  actually someone on the other end, but this fear is soon dispelled as music begins to loop. Right on cue, the projector comes to life and shines prisms of light through a tall glass phone booth. The result is a beautiful display of animated three- dimensional forms that float like spirits in a peaceful void (and are actually scenes taken from an Asian film called Happy Ghost 3). The  installation is in fact entirely dependent on the interactions and movement of the visitor, without which it lies dormant.

Lost Secrets of the Royal is a project that arose from the discarded film reels of Hong Kong cinema, donated by  Colin Geddes from Toronto’s Royal Cinema. Alongside Saïto and Mochizuki, works by Louise Noguchi and soJin Chun make up the other half of Lost Secrets of the Royal at A Space Gallery in  Toronto, and also make use of 35mm film to reframe classic Asian cinema through the Western lens. The exhibition series is a  programme in conjunction with the Liaison of Independent Filmmakers of Toronto and the Toronto Reel Asian International Film Festival (which lasts until November 18) to transform these damaged film fragments into new works of art for a gallery setting.

The exhibit also features related programming as part of the U of T Art Council’s Speakers in the Arts 2011 Series, including two nights of film screenings and performances by Ken Jacobs: Nervous Magic Lantern on Friday, November 18 from 8 to 10 p.m. in the Instructional Centre, and Seeking the Monkey King on that Saturday from 7 to 9 p.m. in room 140 of University College on the St. George campus.

Lost Secrets of the Royal runs until December 11 at the Blackwood Gallery and A Space; visit blackwoodgallery.ca and aspacegallery.org for more  information.