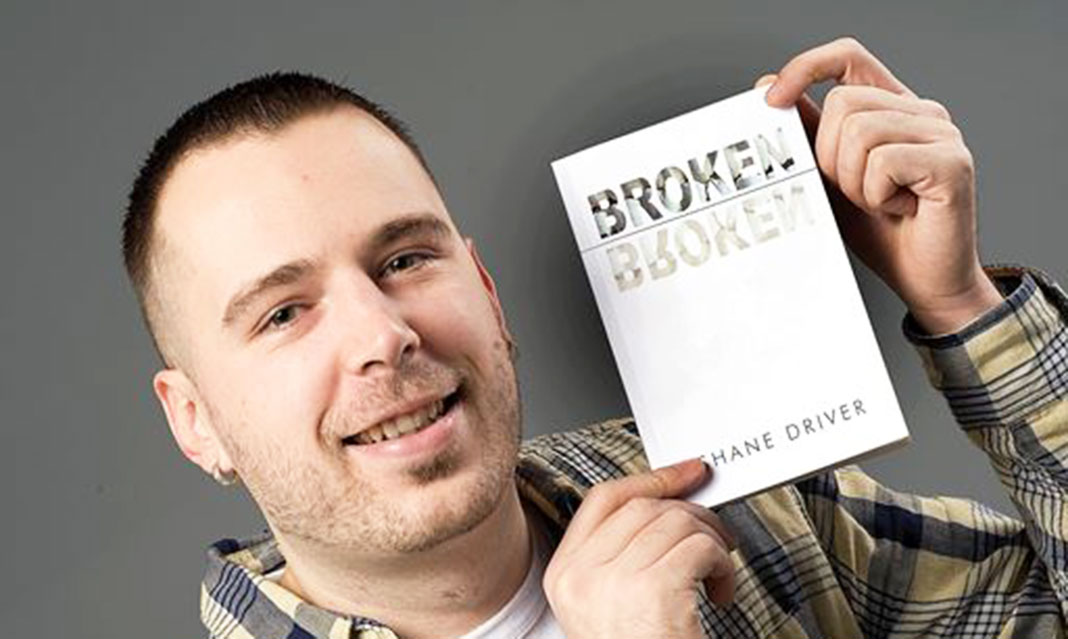 Broken is a collection of autobiographical short stories written by former University of Toronto student, Shane Driver, originally as class assignments for the Professional Writing and Communication program. The volume was published in 2014 by Life Rattle Press, a nonprofit publishing company with a focus on creative non-fiction by new writers from various local communities. Five years after its publication, Broken is part of the WRI325: Community and Writing syllabus.

Driver writes about his life as a quarrelsome teenager growing up in Oakville, balancing the heartwarming, the peculiarly amusing, and the excruciating details of his past. The first story in the collection, “Broken,” presents readers with the brutal retelling of Driver and his friend getting into a violent bar fight that leaves Driver with a broken jaw. This disturbing opening story foreshadows Driver’s destructive behaviour throughout the rest of the book.

The second story, “The Perfect House,” provides an explanation for his aggression through a flashback: eleven-year-old Driver moves into the “perfect” new home, only to watch his parents’ violent disagreements and subsequently the deterioration of their relationship. Later, he eagerly accepts the advice of his older brother—to fight any kid who disrespects him. Young Driver adapts this motto into his life, which only gets him into countless fights and trouble with the law, proving to be detrimental to his personal growth.

In “Thank You,” Driver lives alone in an apartment in Ottawa while he pursues the same career path as his father by attending Algonquin College’s marketing program. One weekend, he anticipates the visit of his father’s friends. Driver’s life undergoes an unexpected change when they arrive with devastating news—his father had passed away. He reacts to the loss of his father by simply saying, “I just saw him a couple weeks ago.” Driver’s ability to recount this story with such painful honesty makes this scene all the more heartbreaking and makes us feel closer to him.

In the second half of the collection, Driver devotes himself to “staying out of trouble,” as his father used to tell him frequently. When the marketing program and work in sales leaves him feeling dissatisfied, as it also did for his father, Driver makes the decision to enroll at the University of Toronto where he discovers his passion for writing. The presence of Driver’s father throughout this collection is important as he is the only one who never gives up on him, and in turn, Driver never gives up on growing into the responsible young man his father wanted him to be. Driver dedicates the collection to his father at the beginning of the book, honouring the memory of the man whose encouragement and advice made this book possible.

Broken is a recollection of a reckless teenager who matures into a responsible adult after experiencing the loss of loved ones and the outcomes of his careless, violent decisions. Driver’s willingness to share the intimate details of his rough upbringing makes this a captivating read from start to finish.

You can find Broken on Amazon.com.