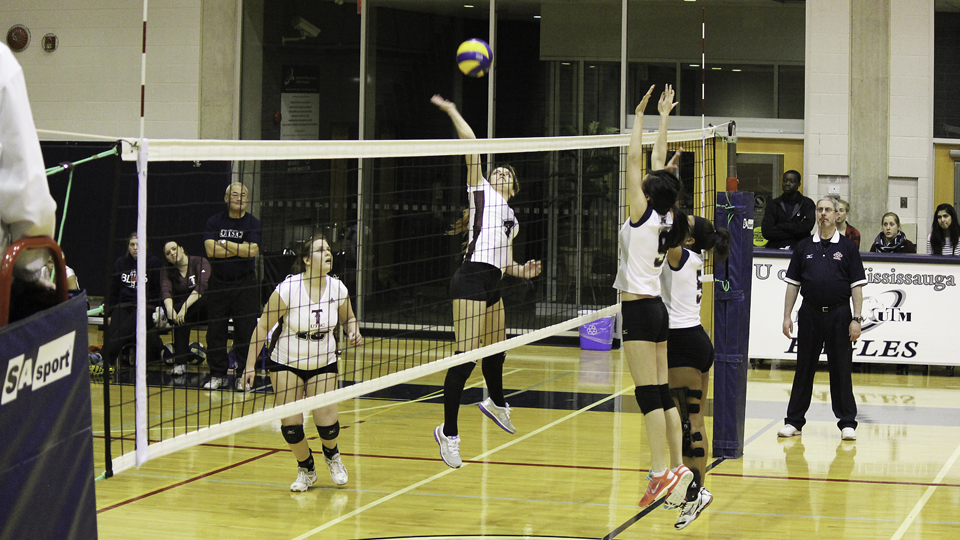 With a mere three games left in the season, the women’s tri-campus volleyball team faced UTSC at the RAWC last Thursday, hoping to nab their first win of the season.

UTM entered this game with a record of 1-17 sets won, sitting in last place in the tri-campus standings. Though both teams fought to win this game, it was especially sentimental for UTM, it being their head coach Peter Bui’s final game of the season.

UTM and UTSC were neck and neck. UTSC gained a 6-3 lead, but the Eagles wouldn’t give in. After forcing UTSC to make errors, UTM regained the momentum, with Joanna Peplak tying the game. The Eagles’ excellent defence kept them in this close match. UTM gained ground on UTSC and made the score 13-9. The shifts in momentum throughout the first set led UTM to concede on errors, allowing for a UTSC comeback that gave them the set.

With the second set underway, UTM took an early 4-0 lead. The Eagles’ pressure, communication, and determination helped them gain some momentum, earning a 10-point margin against an equally determined UTSC squad, to make the score 18-8 halfway through the set. After digging themselves into a hole, UTSC was able to inch their way back into the game, making the score 22-18. Although UTM came close to giving up their hard-fought lead, they held on to the second set, 24-18.

As the third set began, UTM again took the early lead. UTM earned cheers throughout the final set from their RAWC home crowd, hoping to gain an advantage against the visiting team. The final set was filled with back-and-forth play, going down to the wire with a two-point difference. The crowd was on edge of their seats, hoping for UTM to come out with the win in their second-last home game of the season. As UTM attempted to gain two points and claw their way back into the game, UTSC finished off an entertaining game with the match point, taking the set 26-24 and winning their third match of the season.

Though it was a tough game, the Eagles fought until the end and put on a great show.

“We can improve in team-building and more talking,” said UTM’s Jelaina Whitney. “We have an amazing skill level at UTM.”

“This last game was a good last game, and it’s the hardest we’ve played,” said Bui after the game.  “It was intense, close, and we put up a good fight.”