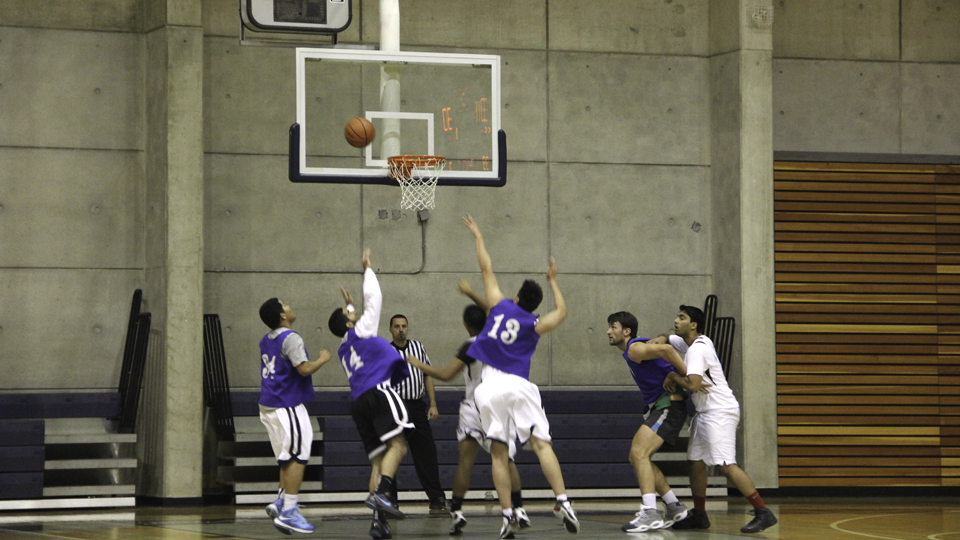 The UTM White men’s basketball team dominated UTSC with a 83-58 win last week in the RAWC, giving UTM a 4-0 streak so far in the season.

UTM started off slow, while UTSC capitalized and took a five-point lead. UTM committed three fouls within the first five minutes of the game, which didn’t help them stop UTSC’s offence. In addition, the team gave up a couple of turnovers, leaving them scoreless for the first few minutes. UTM’s guard Miguel Bediones opened the scoring for UTM with a jump shot, ending UTSC’s run and putting the score at 5-1.

UTSC’s effective defence made it difficult for UTM to catch up. The UTSC players marked the UTM players closely and forced them to commit several turnovers. Refusing to let turnovers stop them, UTM was able to lock their defence down to prevent UTSC from getting further ahead.

Joshua Codinera and Zak Khan’s appearance on the court boosted UTM’s offence. Codinera’s first shot was a three-pointer; he used his speed to slash through defenders and score in the paint, totalling 15 points at that point in the game.

Head coach Juan Nunez put two of his tallest players, Jeff Thorpe and Hans Nuskanovic, on the court to control the rebounding. Thorpe tied the game 21-21 by grabbing a couple of offensive rebounds and laying both in by the five-minute mark of the first half. Khan then put UTM ahead of UTSC with a layup while Codinera provided the assist. Now, it was a closely contested match. There were eight lead changes, with UTM leading 31-30 following a hard foul against Codinera that led to him being slammed hard on the floor by a UTSC player. The tough Codinera was immediately back on his feet to provide a no-look pass to Khan, who buried it with a jumper.

It was then that UTM began pulling away from UTSC, with Codinera burying a three-pointer and putting UTM ahead at 36-30. UTSC’s head coach called a timeout, hoping to end UTM’s run of seven in the last two minutes. UTM didn’t waver but tightened up their defence by forcing turnovers. UTM forward Han Wang stole the ball and scored an easy layup. The first half ended with a layup by Khan, putting UTM ahead at 42-32.

The second half began with a three-pointer by Codinera. UTM didn’t let up in their attempts to score, but soon faced foul trouble once again. Unfortunately for UTSC, they failed to capitalize at the free-throw line and were unable to put up more points. To make a bad situation worse, UTSC began committing careless turnovers, and several UTSC players were called for travelling. UTM took full advantage of the UTSC turnovers; Codinera stopped a fast break by disrupting a pass to the intended UTSC player while Wang helped with a block shot.

Khan contributed to his team’s scoring effort in the second half, managing to steal the ball and lay it in. He also provided a pull-up jumper to put his team further ahead to 55-40, leading the scorers on both teams with 19 points to his name.

UTM also dominated UTSC in offensive rebounds. UTM players fought hard to get the loose balls. UTM big man Thorpe was a beast in the paint, grabbing another offensive rebound and scoring; Thorpe finished the game with 12 points off the bench.

“It was like dancing,” said Thorpe in reference to his rebounding performance. Thorpe contributed his leg strength to a summer spent biking in Montreal; he said this gave him that extra edge to “push guys around without the ref seeing”.

With UTM in complete control of the game and a commanding lead of 75-56, some UTM fans heckled UTSC players at the free-throw line. Remaining resolute, UTSC continued to fight hard, as forward Jeffrey scored back-to-back three-pointers. UTSC players continued to charge forward even though they were down by double digits. UTM players matched UTSC’s tenacity, which resulted in a technical foul against Nuskanovic. UTM supporters were shocked and vocal when UTSC was awarded four free-throw attempts. Fortunately, it was too late and UTSC couldn’t catch up to UTM. The UTM bench played a big role in the win, with three bench players scoring in the double-digits.

“Every guy brings something to the table by the end of the day to help the team win,” said Nunez. In regards to his team’s foul troubles, he believes they have to “address some issues on defence, like moving our feet, not using out hands. I feel like that was specifically [why] most of the fouls were called.”

Nunez is very hopeful that his team will reach the finals and win. Last year, UTM made it to the semi-finals but fell short. If this game was any indication, UTM has a chance of making Nunez’s wish come true.