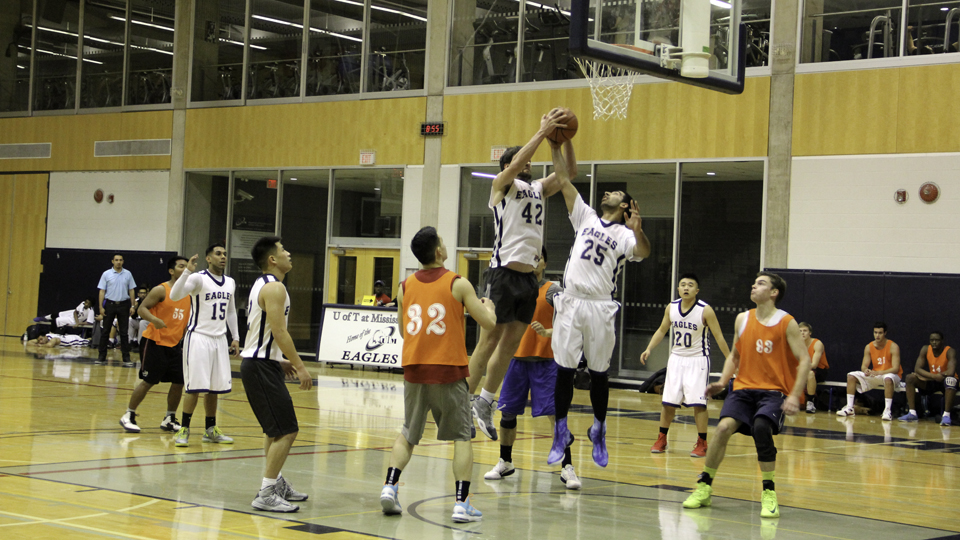 The UTM White Division 1 basketball team beat the Department of Kinesiology and Physical Education team 73-64 in an encounter last Wednesday that went down to the wire.

Coach Juan Nuñez told his team to intensify the pressure on the KPE squad in the last two minutes if they wanted to win this game with a clear difference in the score.

Both teams started the game out with flawless three-pointers, but KPE took the early lead with an offence facilitated by guard Ari Ross.

Seven minutes into the half, UTM’s Zak Khan carried out a brilliant solo effort, taking advantage of a KPE turnover and beating two defenders to take the ball to the hoop.

Both teams presented a solid and composed defensive game. In the sixth minute, UTM guard Haris Nurkanovic made an excellent block to put an end to a swift KPE counterattack after teammate Miguel Bediones lost control of the ball.

By halftime, KPE held a slight lead over the first-place UTM White squad with a score of 31-30.

Just like in the first half, the second half was dominated first and foremost by attacking flair. UTM’s Paolo Militar made a quick bounce pass to Justin Nguyen, who scored from close range.

In the first four minutes of the second half, UTM’s Andrew Williams completed his solo move forward through a perfectly timed steal that led to a simple and successful layup.

Two minutes later, a rather anxious-looking Patrick Door took a three-point shot from afar so as to keep KPE in the match.

Each time UTM White scored, KPE responded, making it a close game throughout. Door’s energy and refusal to give up seemed to lift his team’s spirits as KPE pulled off a rapid comeback, going from 10 points behind UTM’s lead down to being four points away the Whites’ score, with five minutes to go.

However, a full timeout called by Nuñez inspired the home side to heavily press the visitors for the remaining two minutes. Nguyen recovered the ball after a KPE turnover and scored a vital layup for his team to extend the lead and give UTM White a 73-64 win.

“[I] wanted to see them get on top of the Orange [KPE] in the last two minutes of the game,” said Nuñez. Jeff Thorpe remained further back in defence to guard the basket, while his four remaining teammates were ruthless enough up front to give the Whites the win with a nine-point margin. This was something that was missing from previous tight matches.

MAN OF THE MATCH

Zak Khan (UTM White)—He was intense from the beginning until the end, scoring 35 of his team’s 73 points without trying to force any shots, meaning he netted roughly 48% of all successful baskets. He showed the qualities of a great playmaker and is definitely a player to look out for in the future.