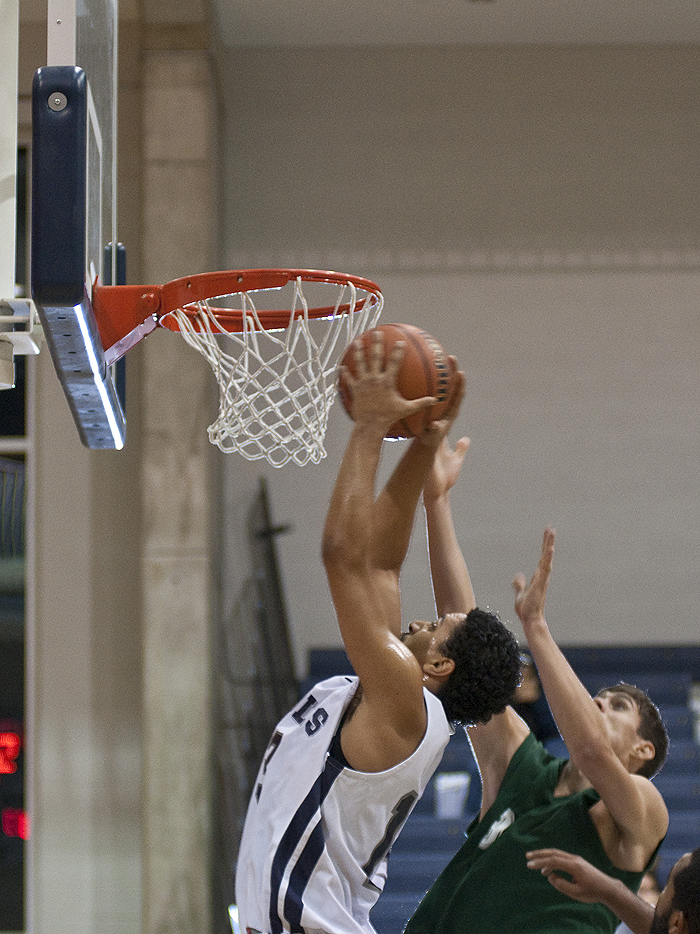 The UTM Eagles mens division 1 basketball team won 75-65 against Woodsworth College last Wednesday. So far in the season, UTMs record stands at 2-0-0, in step with a triumphant 72-45 win over Law in the Eagles first game.

After securing possession from tip-off, UTM continued to dominate Woodsworth, keeping the ball deep in the opponents end for the majority of the first half. UTM tried their luck with a missed three-point shot in the first run, which was easily rebounded by the Eagles for another chance at net.

Although it took a Woodsworth turnover and basket to jumpstart the Eagles drive, UTM made it onto the scoreboard early in the eighteenth minute of play after a two-point jump shot from Elias Sbiet. A slew of supporters gathered in the stands chanted loud cheers for the mens team and the fans received free t-shirts last Wednesday — tokens of gratitude for their spirited support.

The game saw excellent passing and possession by UTM, who played with a calm and practiced approach to the basket. We practice once a week with the some tournaments and exhibition games every now and then. Our practices are condition, strategy and skill based. After last nights game, we need to get back to the basics like rebounding, passing and defense, said coach Ammer Askary, who has coached the mens division 1 basketball team for the past three years and won two championships. Anish, who coaches alongside Askary, has been with the team for five years and has led the team to three championships and two finals appearances.

With a solid history behind them, the UTM Eagles conveyed a strong desire to capture first place again this year.

I believe that we have the perfect combination of players on this squad, said fourth-year veteran Ambrish Patel. This years team is by far the most talented in the last couple years. We will definitely repeat as champs, no question about that.

Patel added that the team can improve on pressure defense. We have quite a few rookies on this team. And they are still adjusting. But we’ll pick up on that soon, said Patel.

Rookie or veteran, the team tactics of Wednesdays game was clear. It was strategy versus drive, as UTM showed good movement on the court and manufactured a long list of strategies and plays. The team wasnt afraid to move the ball and pass to get a clear shot— a stark contrast to Woodsworths blind ambition and unorganized play.

Woodsworth gained a chance to catch up on points after a few UTM fouls. The Eagles refocused on man-to-man strategy after that and optimized on their opponents short-bench weakness.

We played way below our capabilities. Woodsworth only had 5 players, which might have made our players think we had an easy game. We should play our game regardless. I have high expectations for these guys because they are good basketball players, said Askary.

And the most memorable moment?

Alan Carty’s cross over, said Patel. Between the legs of the opponent on the fast break, and an acrobatic lay-up. All you could hear were ooos and aaahs from the fans.